Chicago IL: The Federation of Indian Associations-Chicago (FIA) hosted a festive gala banquet in celebration of the India Republic Day that was enhanced by the spirit of patriotism of the Indian Americans filled to the capacity at the Meadows Club in Rolling Meadows, IL to united celebrate the 66th year of the India’s sovereign democratic republic.

Buoyed by the sizeable attendance, the fervor of the evening’s Republic celebrations was further augmented with the dazzling dance presentations, melodious musical selections with the entire event enveloped in a festive Indian spirit.

After the lighting of the lamp, Honorable Bill Foster represents Illinois’ 11th Congressional District set the tone for the evening by commending India’s republic and India’s abiding commitment to a democratic way of life. Congressman congratulated FIA leaders for hosting a commendable event to mark this significant date in Indian democratic history.

Keerthi Kumar Ravoori, FIA’s outgoing president in his remarks eloquently praised India’s triumphant journey of 66years and its enduring spirit of democracy and recalled the golden moments in history when India attained freedom and that which culminated into a sovereign democratic republic of India with constitution to guide its destiny.

Keerthi Kulmar Ravoori generously thanked the guests, board members and the trustees for their valuable partnership in making the event a grand success. Ravoori outlined the successes of his tenure as president and added a list of accomplishments most notable being Grand Parade, Mela, Banquet, Flag-hoisting and Visa Camp.

Dr.Indrajit Patel, FIA’s new president took to the podium and gave a detailed summation of his vision for 2015-16 for FIA and pledged to work with the community leadership to bring greater laurels to FIA. Dr. Indrajit Patel expressed gratitude to the FIA team for bestowing upon him the pride of opportunity to serve FIA as their new president.

Earlier, special awards were presented to Syed Hussaini and Hanumanth Reddy of ATA for their distinguished services to the community. Mr. Syed Raza, first Indian Navy officer offered a guard of honor salute to the Indian flag before the Indian National anthem was sung. A floral boquets were presented to Dr.Ram Gajjela for successfully carrying out duties as banquet chair; while floral boquets were also presented to Trupti Patel of Payalaya Dance Academy and Rajani Akruti for choregraphing and directing the cultural show. Sanhita Agnihotri handled the microphone as the emcee for the evening and Ajeet Singh coordinated the program sequence; Minhaj Akhtar recognized the community and business leaders who lend support to the gala.

Earlier, Dr. Ram Gajjela, Banquet Chair introduced congressman and praised his congressional leadership efforts for being an outstanding friend of the Indian American community and for his steadfast support to the causes important to India. Dr. Ram Gajjela also praised the guests for their presence at the event to honor India’s republic. 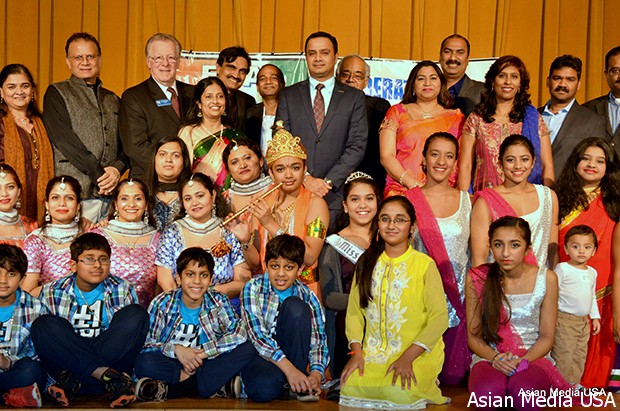 Several of the FIA Trustees including Ajai Agnihotri; Babu Patel, Sohan Joshi, Sitaram Patel, and Hetal Patel were invited on the stage to be applauded for their steadfast support and leadership. Also, recognized were the principal sponsors and business leaders including Nakul Chand Singh, Air-India’s Midwest Manager and Syed Hussain, Vice President of Win Trust.

The highlights of the evening was colorful cultural dance presentations by young dancing troupe directed by Trupti Patel and Rajani Akruti.