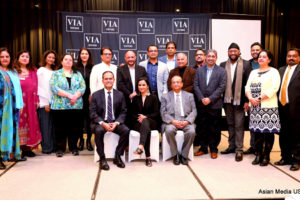 Chicago IL: VIA Voters is a new community group launched with the goal of increasing the civic engagement of Indian-Americans in Chicagoland & nationally. The founding members of the group are prominent business persons and community members Mr Sanjjeev Singh, Dr. Anuja Gupta & Dr Bharat Barai. “We felt there was a need for a Non-Partisan Platform that promoted the civic engagement of the Indian-Americans at the local and national levels” said the founders. The top goals of the group include seeking a better level of engagement with elected officials, creating a more informed voter base and increasing the participation of Indian-Americans in the election process. The VIA Voters was officially Launched at the Waterford Banquets, Elmhurst IL on Sunday, January 13th 2019. Several community business persons, leaders and the media attended this event. “In our businesses we often need to interact with elected public officials and a big goal for me to initiate such a cause was to seek a better level of engagement with them” said Dr. Anuja Gupta. Dr. Gupta is a physician and real-estate developer of Verandah Retirement Community. She is also an active community leader, having founded the Womens Empowerment Campaign (WE) Chicago a networking […]

END_OF_DOCUMENT_TOKEN_TO_BE_REPLACED 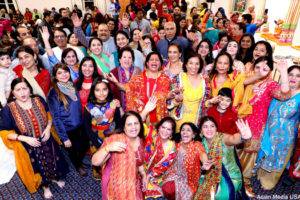 Chicago IL: Unprecedented crowds thronged the Hari Om Mandir, Medinah, IL on January 13th to celebrate the vibrant Festival of LOHRI!!! This Festival has always been celebrated in HOM in the Traditional North Indian Style, with the favorite foods, clothing, songs, customs etc. of Punjab. This year too, despite the very cold & frigid temperatures, Devotees in unexpected numbers – close to a 1000, came to the Temple to enjoy the Festivities. People came in from far & wide…neighboring States of Indiana, Michigan & Wisconsin, attended this much awaited and most popular Festival celebrated in HOM. The Temple Management had made adequate arrangements to serve the Special Meal of the Season – Makki Ki Roti, Saag, Lassi and Gur Wale Chawal. Along with this, the traditional items like Bhugga, Popcorn, Rewari, Moongphali, Khajoor and Chirvara were distributed as Prasad. The Food was relished by one and all! People were raving about the delicious food, and truly appreciated the immense efforts put in by the Ladies…Food Incharge, Mrs. Pooja Sharma and her team of young girls from the “Sanjha Parivar” spent the morning cooking all the delicacies.  Several others joined  with cash donations and  bringing in Peanuts, Gachak, Rewari, Chivda, Til […]

END_OF_DOCUMENT_TOKEN_TO_BE_REPLACED 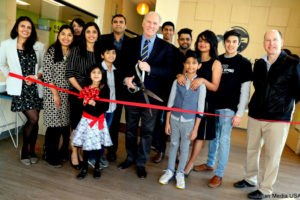 Naperville IL: Code Ninjas Center opened up the doors to the Naperville Community, Focuses on Video Games, Robotics, Drones, and other STEM Activities. The Grand Opening celebration was a tremendous success and more than 250 people joined hands in celebrating the great addition to Naperville city. Realizing the impact technology has on our future and how it continues to the shape the future we live in, Shilpi and Darshna (Moms of 9 year old boys) identified the long persisting gap in the community. The dynamics of the future has dramatically shifted in favor of ever evolving technologies. Before the wave hits and our kids are not prepared to face it, they realized the need of an environment where kids can come in, be intellectually stimulated and also have a LOT of FUN while doing it. At Code Ninjas , they  build their future step by step , learning how to code , earning belts ( white to black ) while each belt introduces them to a new skill/language,  learning Robotics, a plethora of STEM activities and also have a LOT of FUN while doing this . They progress on a path and at the same time enjoy the process of […]

END_OF_DOCUMENT_TOKEN_TO_BE_REPLACED 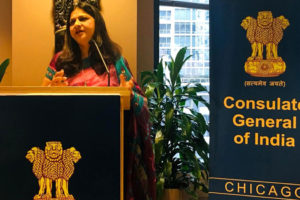 Chicago IL: Ms. Nupur Jhingran, a community member, welcomed the guests and participants of the event. She gave a brief introduction about Pravasi Bharatiya Diwas, its relevance and role of NRIs in India. She also recited a poem written by her for the occasion. Consul General Mrs. Neeta Bhushan delivered the keynote address. She welcomed and thanked the community for their presence in the celebration of the 15th Pravasi Bharatiya Diwas at the Consulate. She highlighted that PBD is being celebrated as a festival from January 21-23 in Varanasi followed by Kumbh Mela in Prayag Raj and celebration of Republic Day in New Delhi on 26th January. She acknowledged that 30 million Indians living abroad have made significant contributions and have numerous milestones and achievements to their credit. She mentioned that the effort of the government has been to reach out to the Indian community settled across the world. Consul General once again stated that the Consulate has tried to be a very open and transparent. It is there for the community in matters of crisis, such as any medical emergency, loss of passport, theft of personal belongings or any unforeseen situation. Also, that the Consulate has 24/7 helpline emergency number, open […]

END_OF_DOCUMENT_TOKEN_TO_BE_REPLACED

Chicago IL: January 1st 2019, Tuesday, started off with a Bang in the premises of Hari Om Mandir, Medinah, IL. Huge crowds gathered in the Temple to seek Blessings from God Almighty on this auspicious day, and prayed for a healthy, wealthy and prosperous Year ahead. Smt. Rama Kapoor & Mr. Subhash Sharma, along with their Bhajan Mandli, and Mr. Jignesh Pathak on the Dholak, recited the “Sunderkand Path” to seek Blessings from Lord Hanuman Ji for a blessed year ahead. Nature too co-operated and the Sun shone brightly with moderate temperatures, as Devotees in large numbers thronged the Mandir to offer their prayers and seek blessings on this very first day of the New Year. The Mandir was beautifully decorated with Buntings, dazzling Streamers, Banners, Flowers, Bells etc to enhance the ambience for the celebrations. As the Devotees walked in, they were welcomed with Hanuman Ji Sash around the neck, and handed over the holy Sunderkand Path Book to sing along. In Hari Om Mandir, the 1st of January, is also a day of administrative activity. The 2 Boards – Executive Board (EB) and Board of Trustees (BOT) that run the show all year round, are introduced to the […]