Chicago IL: The Maharudram Committee of The Hindu Temple of Greater Chicago, Lemont, IL organized the grand inauguration ceremony of the prelude series titled “Rudra: Who Really is He?” on Saturday Jan 31, 2015. The function was attended by over 700 people and the Sama Rathi Auditorium in the Temple was fully packed. The overflow crowd watched the program live on an overhead display in the Gupta Hall at the Temple.

This is the prelude program to the main event “Maharudram and Navachandi Mahayagnam” coming up later this year in June. The prelude is comprised of a series of enlightening discourses and cultural presentations bringing out the spiritual symbolism of Mahayagnas and their contribution to universal peace, welfare and prosperity. 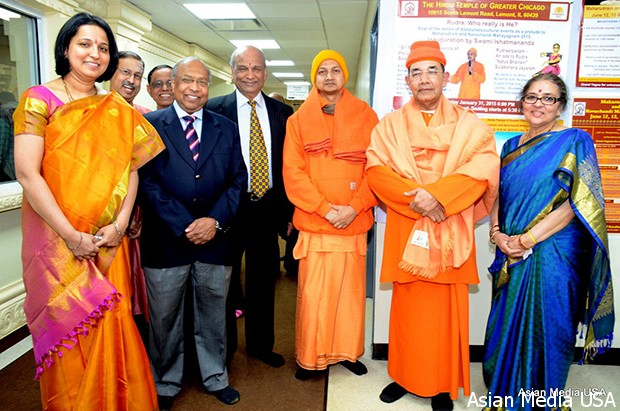 The program started sharply at 5:45 PM with a prayer to Lord Ganesha by Sri Vengatesa Sivachariyar, distinguished priest of the temple.

Revered Swamiji Ishatmananda, senior monk of Sri Ramakrishna order and Minister In-charge, Vivekananda Vedanta Society of Chicago, and the Honorable Consul General of India, Dr. Ausuf Sayeed, were welcomed to the stage and honored with garlands by Sri Lakshman Agadi, Chairman of Maharudram committee and Sri Bhima Reddy, President of HTGC. The keynote speaker of the evening, Swamiji Sarvapriyananda was then
honored by Sri. Jim Sussarey of the Maharudram committee.

Swami Ishatmananda then inaugurated the series with the traditional Lighting of the Lamp Ceremony with the assistance of Smt. Jhansi Reddy. In his inaugural speech, Swami Ishatmananda gave a beautiful explanation for Yagna, where in the devotee pours his ignorance into the fire while offering oblations and thus becomes one with Shiva. He quoted Swami Vivekananda who explained Lord Shiva as an embodiment of sacrifice for the benefit of others by drinking the poison himself in order to save others. 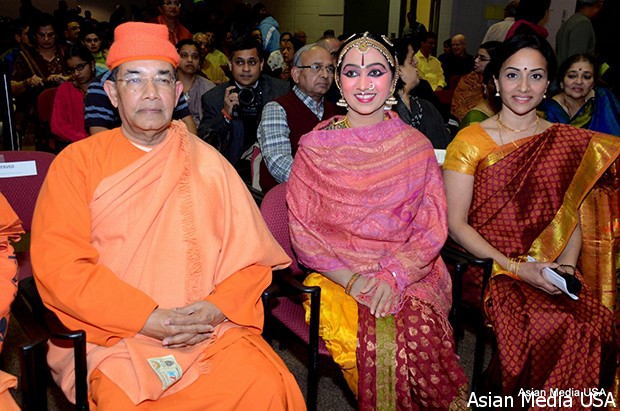 President Sri. Bhima Reddy welcomed the gathering with an introductory address. In it, he explained how the HTGC, which started as a place of worship three decades ago has transformed into a monumental institution upholding the traditional cultural, religious, and spiritual values that India holds dear.

This was followed by Sri. Lakshman Agadi explaining the three-day Mahayagnam in detail. He invited the gathering to attend the grand function in June, which will be marked by more than a thousand women reciting the Lalitha Sahasranamam, invoking the Divine Mother with Her 1,008 names. He explained how hundreds of scholars from all over the country will gather and chant Sri Rudram, the most ancient Vedic prayer for Lord Shiva. The Navachandi Mahayagnam on Sunday, June 14th is planned in such a way that everybody can participate in offering oblations into the sacred fire. He went on to explain that various Ṣaints and Satgurus have accepted the invitation to grace the occasion with their presence, which is likely to be attended by over 5000 devotees over the three day span.

The Consul General Dr. Ausuf Sayeed explained how he researched on Sri Rudram after being invited to this occasion and that he was inspired to learn Rudra actually meant someone who eliminates evil and establishes peace. Rudra is the beginning from where the entire universe emanated and to which everything will converge when we obtain liberation through the knowledge of The Supreme Being. He said Mahayagnas are an ancient Indian heritage and have been performed since time immemorial with the objective of global peace. 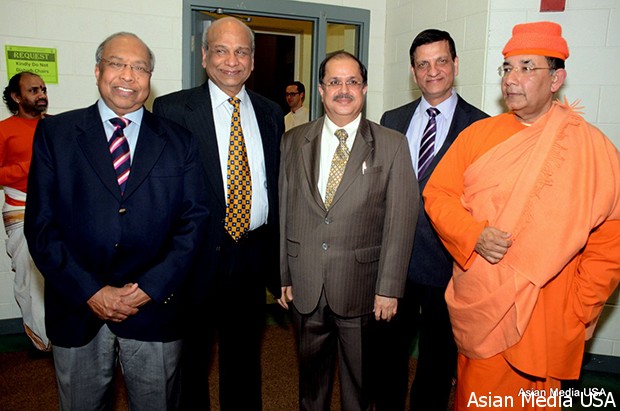 One of the biggest highlights of the evening was the perfect rendition of Sri Rudram by Sri. Steve Burdick and Sri. Jeffrey Erhard, which prompted the attendees to rise and give a standing ovation. Erhard then followed this with a soul-stirring bhajan session on Lord Shiva. Erhard and Burdick were honored by Sri. Tilak Marwaha, Vice President of HTGC and Smt. Prasanna Reddy, Religious Chair, with shawls and gifts.

In 1893, Swami Vivekananda came from Calcutta to Chicago and mesmerized the audience with his thunderous speech. In a similar fashion, Swami Sarvapriyananda, a young and dynamic monk himself from Belur Math came to Chicago and gave a spellbinding presentation on how Sri Rudram contains the essence of all the Upanishads to a rapt audience.

Swamiji, with a slideshow presentation, explained how Sanatana Dharma is an eternal religion and how the Mahavakyas of the Upanishads reveal that the soul (Atman) and the Brahman (universal consciousness) are one and the same. He regaled the audience with the parable of the tenth man and explained the oneness of existence that the Upanishads teach.

The lecture was followed by a wonderful Bharatanatyam performance by “Natya Bhairavi” Sulakshana Jayaram, an empanelled artist for the Indian council of cultural relations. “Rudraarpanam – An ode to Rudra” was choreographed entirely by her for this inaugural event. 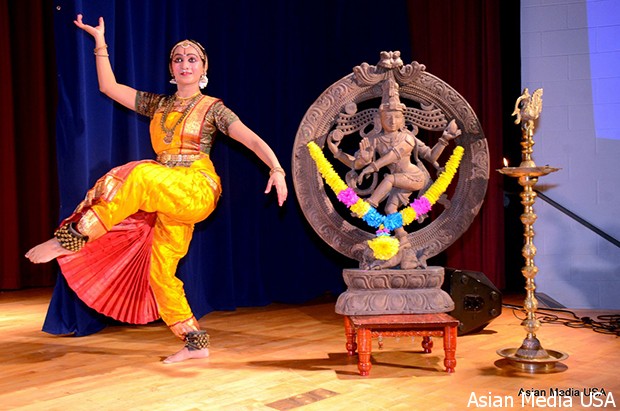 Sulakshana’s dance recital commenced with “Bho Shambho”, the song in praise of Lord Shiva composed by Swami Dayananda Saraswathi, and followed with “Yenneramum Avarai Ninnaindenadi”, composed by Sri. Pandanallur Sreenivasa Pillai. Sulakshana’s depiction of the longing love of the heroine for Lord Brihadeeshara was just immaculate. The crowning piece of the entire performance of the evening was the dance for the song “Vazhi Maraithirukkude”, composed by Gopalkrishna Bharathi on Nandanar Charitram.

Sulakshana Jayaram was honored by Smt. Vedavati Agadi, Smt. Jhansi Reddy, and Smt. Prasanna Reddy. The emcee for the evening was Dr. Sangita Rangala, a busy physician and a mother of two young boys. Being an Odissi and Kutchipudi dancer herself in addition to overseeing a dance school, she not only emceed the event but also introduced and explained each dance item. Clear and articulate, she involved the crowd right from the beginning of the program by telling them to repeat after her the following famous slokha and explained how such auspicious gatherings lead to the ultimate goal of self-realization.

Smt. Vijaya Sarma, Co-Chair of Maharudram Committee, gave the vote of thanks. She expressed grateful thanks to Swami Sarvapriyananda for the wonderful speech and said she was reminded of William Blake’s words
“To see a world in a grain of sand And a Heaven in a wild flower,
Hold Infinity in the palm of your hand And Eternity in an hour”

She went on to say that Swamiji had taken a difficult topic, the most profound of all topics, the oldest of all topics and in little under an hour, frozen time and space and given a beautiful insight. While thanking Jeffrey and Steve, Smt. Vijaya mentioned that after hearing the impeccable recital of Sri Rudram, her son came and asked how to learn to chant the Vedas as perfectly as they did. She said this is a testament to how they inspire everyone, not just second-generation Indians, to take an interest in learning this universal and ancient spiritual tradition.