Chicago IL: Honorable Consul General Ausaf Sayeed celebrated India’s 66th Republic Day On Monday, January 26, 2015 with leading Chicago-land entrepreneurs and citizens to honor the sacrifices our freedom fighters have made and to remember the work of our Founding Fathers, for giving to us a country where our dignity and individual freedom is assured. He also extended his warmest greetings to all across the country and also to those living abroad. Indian Consulate is located in the heart of downtown at 455 North City front Plaza Drive, Suite No.850, NBC Tower Building, Chicago, IL.

The event began at 10 am as the Honorable Consul General saluted the Indian Flag as he held the rope to release the Indian Flag called “Dhhwaj Vandan” to respect and honor the Indian Flag, followed by singing of Indian National Anthem. He also recited the speech given by honorable President of India, Pranab Kumar Mukherji on the eve of Republic day on 25th January, 2015 in India. While addressing the countrymen, the President also notably recognized the contribution of the Indians living abroad. He covered every aspect of India and Indians who are actively engaged in the progress of the country, their achievements, their gains and shortcomings. 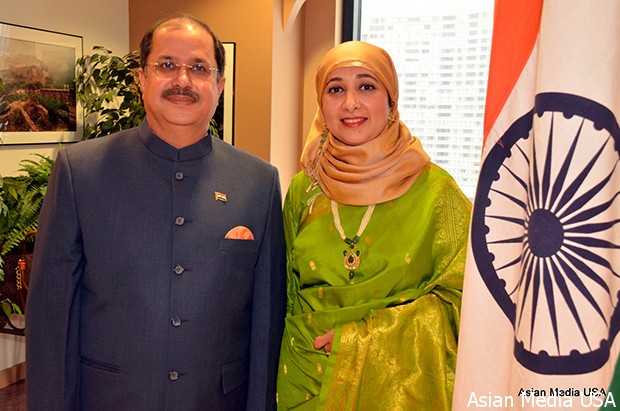 “The Republic Day commands the respect of every Indian. On this day, sixty six years ago, in a remarkable display of idealism and courage, we the people of India gave to ourselves a sovereign democratic republic to secure all its citizens justice, liberty and equality. We undertook to promote among all citizens fraternity, the dignity of the individual and the unity of the nation. These ideals became the lodestar of the modern Indian State. Democracy became our most precious guide towards peace and regeneration from the swamp of poverty created by centuries of colonial rule. From within the spacious provisions of our Constitution, India has grown into a beautiful, vibrant, and sometimes noisy democracy. For us, the democracy is not a gift, but the fundamental right of every citizen; for those in power democracy is a sacred trust. Those who violate this trust commit sacrilege against the nation.

“Pandit Jawaharlal Nehru, Sardar Patel, Subhash Chandra Bose, Bhagat Singh, Rabindranath Tagore, Subramanya Bharati and many more – the vocation and the approach might have been different but they a” spoke the same language of patriotism. We owe our freedom to these great warriors of nationalism. We also salute the unsung heroes who have died securing the liberation of Mother India” Said by Honorable Consul General Ausaf Sayeed.
Hon. Ausaf Sayeed was the perfect host and radiated with hospitality, courtesy and humbleness along with the entire Consulate General team and his wife Farah.. Concluding the reading of the President’s address, the Consul General thanked all the attendees for participating in the Republic Day celebration. 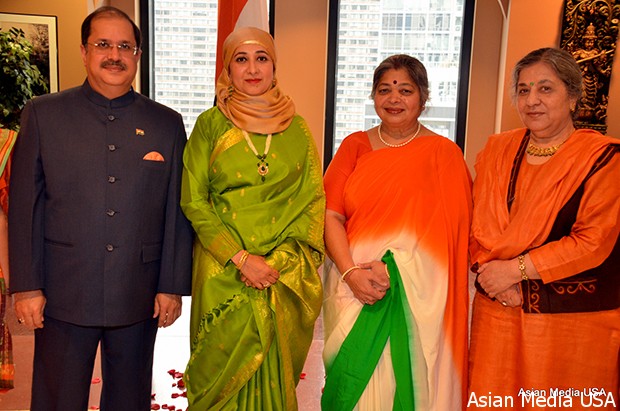 President Obama became the first American leader to be chief guest at India’s grand Republic Day celebrations Monday January 26, 2015, an honor that underscored the growing warmth between the two countries. India’s Prime Minister Narendra Modi and Obama watched the military displays, musicians and decorated camels from inside a protective glass enclosure. Obama and first lady Michelle Obama received loud cheers as they took their places on the parade route at Rajpath, New Delhi’s ceremonial boulevard. The parade was the highlight of Obama’s three-day visit, focused on strengthening ties between the two countries after years of tension and mistrust. Thousands came out despite the poor weather to see the festivities.

Delicious snack items were served during the celebration, on behalf of the Consulate General. It was a nice and somber event with Chicago land elite, businessmen and community members attending the nearly an hour and half event in the morning in spite of 2″Snowweather and very cold weather. 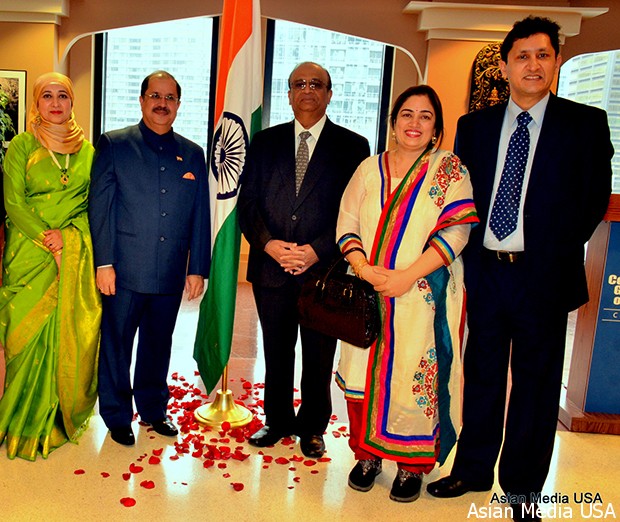 Indian Consulate in Chicago kept up its tradition of celebrating the Indian Republic Day with lot of enthusiasm. The celebrations took place in the presence of the elite of Indian community at its Downtown office. It was a nice and somber event with Chicago land elite, businessmen and community members attending the nearly an hour and half event in the morning in spite of the snow and very cold temperature.