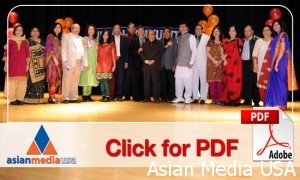 Skokie, IL: The Indian community of Niles Township celebrated India Republic Day through the afternoon of February 9, 2013 at Fairview School District 72, 7040 Laramie Ave Skokie, IL with music and dance performances, interspersed with remarks by the organizers and various guests. The initiative and inspiration behind this annual celebration since its inception has been Usha Kamaria. Chief Guest was Skokie Mayor George van Dusen. People came even from far suburbs outside Niles Township.

The program began with the auspicious lamp lighting ceremony performed by Rohit Joshi, accompanied by several dignitaries. DJ Chawla led the singing of the American and Indian national anthems, which preceded the opening remarks by Santosh Varghese. Usha Kamaria then took the podium to speak about Republic Day followed by Mayor Van Dusen. His wife Susan Van Dusen spoke subsequently about the annual “Coming Together in Skokie” festival that celebrates in turn one of the many ethnic communities enriching this township. She praised Usha Kamaria for her initiative and vision in promoting the idea: the first culture to be celebrated was that of Indians, followed by the Filipinos, Assyrians, and now the Greeks.

There were dances by Payalia Dance Studio, Tarana Dance Academy, and the Kalapadma Dance Academy. DePaul University Bhangra group performed the energetic Punjabi dance. There were also songs by Shaila Khetkar, Raju Bankapur, Dr. Sonal Patel followed. The outstanding cultural program showcased the rich, colorful and diverse culture of India. Performers ranged from little girls to college students, all of whom seemed to be having a good time entertaining the audience. Singers rendered old and modern patriotic numbers such as Mukesh’s Mera Juta Hai Japani from Shri 420. Kids even commemorated the warrior queen of Jhansi with a sword dance.