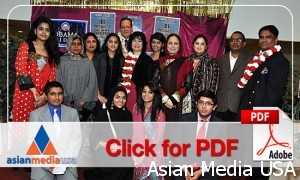 Asian Media USA ©
Chicago IL: President Obama has once again been re-elected! Also, many of our hard-working politicians in Illinois have also been voted into office. Some of these dedicated people include: Congresswomen Jan Schakowsky, Congress Rep. Brad Schneider, Congressman Danny Davis, Alderman Debra Silverstein, Congress Rep. Lou Lang, Alderman Joe Moore, Congress woman Tammy Duckworth and Senator Ira Silverstein. These politicians have been working tirelessly for their people and are representing the people to the best of their abilities, and we graciously thank them for their honest work. So to congratulate these people, there were three celebrations held commemorating the victory of our Democratic politicians! The Pakistani-Indian community has been working hard to organize these parties and support our Democratic politicians. These are short summaries of what had taken place at the three celebrations.

October 30, 2012, is the date of the first of these marvelous parties, which all had the purpose of congratulating our dedicated Democratic politicians, and ultimately our loyal and enthusiastic president, President Obama. This party had taken place at Sahara Restaurant, Schaumburg, IL . 100 guests attended the event. A few of our outstanding luminaries that had attended the party included: Dr. Umair Ilahi, MD. Dr. Mohammad Bowani, Dr. Inam Hussein, Sher M Rajput, Mohammed Amjad, Dr Saeeda Bashir MD, Professor Bashir Ameji MD, Anees Ilahi, Dr Naveen Aman, Dr Saleha Khan,MD , Adnan Osman and Shawnawaz Khan. The celebration had delicious Hyderabadi food, which everyone thoroughly enjoyed, hosted by Tasneem and Masood Sheikh, Arif Mukesh. There was a beautiful musical concert with brilliant performances by Abdul Gafoor and Kanees Fatimah Gafoor of Sur Sangam Entertainment and by the Uma Karia Laya Tarang Musical group by Santosh Varghese. Both performances had succeeded in dazzling the audience with their beautiful music (Bollywood songs). Fiznik Mena was the master of ceremonies and a “Thank You” address was delivered by Mujeeb Osman one of President Obama’s biggest supporters. Mr. Osman has been supporting our President ever since 2002, when he was running for senator. So we congratulate the Democratic Party members and supporters!

November 18, 2012
On the eighteenth of November, 2012, there was a dinner party honoring our Democrats at the Holiday Inn, Skokie, Illinois. The Indo-American Democratic Organization convened the event. The event was organized by Mr. Balvinder Singh (A chairperson of President Obama’s Campaign Organization of America). Mehbub Kapadia MD had also supported the campaign. 500 faithful supports of the Democratic party had attended the event. In addition to the honorable guests, there were statewide, countywide, local, & elected officials present. The guest speaker of the event was the Indian Consulate General Ms. Mukta Tomar. The Democrat Bill Foster had given a speech congratulating all of the volunteers, organizers, and supporters on their fabulous work in supporting the Democrat Party. The Honorable speaker was Senator Ira Silverstein, and other dignitaries included: Congresswomen Jan Schakowsky, Congress Rep. Brad Schneider, Congressman Danny Davis, Alderman Debra Silverstein, Rep. Lou Lang, Alderman Joe Moore, and more.

The people have spoken and they have given a loud and clear message to the nation, that there is no division of red and blue in America, we all should work united in the White House “ said by Mujeeb Osman. Volunteer Mujeeb Osman, Honorable Lauren Beth Gash, and Sen. Terry Link organized voters and canvassed for President Obama’s campaign called Organizing America for two terms since 2007 to re-elect Obama. His territory consisted of Northern Illinois called the Midway Team and other swing states. His team was organized by Hon. Nancy Shephardson Tenth Congressional Democratic District who campaigned for change by remote phone calls done by community women leaders, watchdog, poll watchers, and runners as a final push in targeted precincts. Mujeeb Osman published full page advertisements in South Asian newspapers for over a month to gain momentum in the community.

The wonderful master of ceremonies was Engineer Syed Mukarram and countless other wonderful South-Asian supporters were present, of whom Ms. Farah Baqai was part of. Our dedicated supporters were constantly thanking the wonderful Democrats for all of their hard work, and appreciating all that they had done. Also, an enthusiastic and fabulous young youth, by the name of Ibraheem Khan, had presented an extraordinary speech, causing the encouraging audience to burst into clapping many times. There was also a small youth program in which many kids had come and introduced some of our Democrat politicians and explain their importance and their many wonderful actions to the audience. These outstanding youths include: Mikhail Shah, Rabia Khan, Falak Mirza, Marwa Moosa, Zara Tariq, and Mahira Ather. There was scrumptious Indian-food which everyone enjoyed to their fullest, and there was a fabulous music concert, consisting of famous Bollywood songs. The program was started by the Recitation of the Holy Quran from Ali Khan. One of the supporters (Eng. Mujeeb Osman) had said in his excellent speech: “Today we are living in a time of change. A new era has begun.”
So we congratulate all the fabulous supporters and Democratic politicians.

We would also like to mention a great supporter of President Obama who has taken part in all of these parties and countless more ads, Engineer Mujeeb Osman. He has been supporting President Obama since 2002, when he ran for senator. Eng. Mujeeb Osman has made wonderful ads for President Obama and has posted them in many South-Asian newspapers. He has been going in many events of the President, and organized quite a few of them himself. So we would like to greatly congratulate him for his outstanding effort to make this country a better place to be in. Adnan and Neuman Osman, son’s of Mujeeb Osman are also strong supporters of the President. He is one of the chairpersons for President Obama’s Campaign Organization, and he has organized many events himself for the President. He and his wife are both very active and want to bring about a new era of change. They want to try and bring a new revolutionary change, which will keep America at its best for many generations to come. So we once again thank every single last supporter and volunteer of the Democratic Party, and we also thank all of our Democratic politicians for serving us and representing us to the best of their abilities. We also highly congratulate President Obama’s victory for the office of President, and wish him an excellent 4 more years in bringing about the greatest change America will ever see. Entertainment co-ordinator was Nawab Faiz Khan, Master Saif Ali -D J. composer.