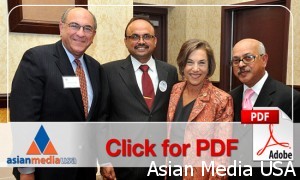 IADO was incorporated in March of 1980. Its mission is to lobby on behalf of the Indian American community on issues of immigration, affirmative action, education, social security, healthcare reform and hate crimes. Additionally, they strive to get Indian Americans to participate in the political process from voting to running for office. In 2011 IADO has endorsed Rahm Emmanuel with the election of a new mayor in Chicago. Also IADO is proud to endorse and raised funds for the first ever Indian American and first ever Asian American Alderman for the city of Chicago, Ameya Pawar.

Parag Mehta did excellent job as MC. He introduced most of the dignitaries and handled whole program that flourished. He gave entertaining yet most heart throbbing speech enthusing every one towards realities of Democratic Party and President Obama in particular. Parag Mehta is former Director of Training for the democratic National Committee. He is a Communications Specialist with more than a decade of experience in Govt., Politics and Community. He has worked as a speech writer during Presidential Administrations of Presidents Bill Clinton, George W. Bush and Barrack Obama. He is a second generation Indian American from Temple, Texas. At present direct Communications for the office of Federal Contract Compliance Programs, a Civil Rights Agency at the US Dept. of Labor.

have saddened us all. First of all, the violence perpetrated on the worshipers at the Sikh temple in Milwaukee last month. The second are the angry demonstrations and even violence against US embassies in so many countries arising from the intolerant and evil video distributed by crazy person on the internet. .. A moment of silence observed to remember the lives lost and to stand in support of their families in their hour of loss. Invited Guests, elected Officials, IADO board members Ladies and Gentlemen , Thank you for joining usthis evening. We have a very special program for you.

In difficult times with so much turmoil in the world, from the worst financial crisis since the great depression affecting not just the United States but the whole world, to the hotheaded anger of the newly emerging democracies in the Arab world, democracies which is unable or unwilling to recognize that America and Americans are friends who have stood by them in good and bad times, we are very lucky to have a president who has a cool head and a kind heart. A leader who listens and watches and is thoughtful in his words and his deeds. A President who acts in a manner that upholds our values around the world while keeping our nation and our citizens safe wherever they may be. We are very lucky to have President Barack Obama as our President now, at this time in history, and we must keep him for another four years so he can strengthen these foundations for future generations. All you have to do is to read the Republican Party platform and compare it to the Democratic Party platform. But it will not be enough for us to reelect President Barack Obama if we don’t give him a senate and a congress that supports him and has the same vision for America that he does. The vision of the Democratic Party.

Let us not forget that we need to put in Washington a team that cares about us. Cares about the middle class. Cares about small businesses. Cares about the new immigrants, cares about the seniors, the handicapped, the children, the students and all kinds of families all over America. Illinois is leading the way in turning this Red Congress to a Blue Congress! After the redistricting we have just 18 congressional districts in Illinois where we have seven star congressmen and Congresswomen who have represented us in a way that makes us all proud. Seven who WILL return? We can add six new congressmen and congresswomen if we can fight the Republican money machine. We need to beat their dirty advertisements and their dirty tricks. In order to achieve this goal, we need your help. We have just 44 days left to change these red districts to Blue.

We need your efforts in getting your friends and neighbors to be registered to vote, and we need you to make sure that they actually cast their very precious ballot on November the 6th. In the 2010 elections too many democrats did not vote. The result was, the rise of the tea party! If all the democrats had voted in 2010 they would not have come into power, we could have passed legislation to help our economy. The economy would have flourished and our unemployment rate would have bottomed out by now. It is not too late to turn the tide back by voting in great numbers! Please Vote! Our future depends on you! Our nation’s future depends on you! I thank you again for joining us and welcome you to a special evening together!

Entertainment Program
Satyagraha: The force for Truth
The concept of Satyagraha as articulated by Mahatama Gandhi has its relevance in the Indigo movement in
India, the civil rights movement as lead by Martin Luther king and when Cesar Chavez used the Gandhian
principal of peaceful resistance to speak up for the rights of farmers in California.

The production today briefly describes the internal conflict that man suffers through his mind, body and soul as he comes to determine action which is the right action. How in the face of tyranny, the leaders and the lead stood together in humility, practicing penance, fasting and peaceful resistance together. Ultimately it was the standing together, in a peace, that led to the hope and vision of a diverse, free and united American that Rev Martin Luther King saw on the mountain top. In the song “We shall overcome” … that, has been translated into languages and movements around the world.

The Kalapriya Foundation
Kalapriya’s mission is to support, celebrate and present to a wide range of audiences the dance and music of India through performances, workshops, educational outreach programs, and formal classical dance and music instruction.