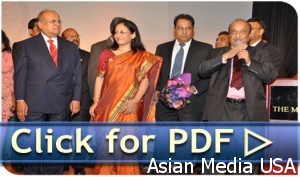 Chicago IL: Federation of Indian Associations [FIA] Chicago held a Grand Gala Banquet in commemoration of India Independence Day on Friday, August 17, 2012 that attracted overflowing guest attendance filled to the capacity at the Meadows Club in Rolling Meadows, Illinois with showcased in great measure the spirit of festive celebrations and patriotic ardor. This evening gala of celebrations and awards presentations were hosted in conjunction with Drishti Arts.

The banquet saw the convergence of community’s elite and the eminent at this sold-out evening gala celebrations heightened by music, dance, fine food and celebratory revelry. The banquet brought great musical ensemble with their extravaganza “Aye Mere Waton Ke Logo” a special live-audio/visual musical tribute to Mother India. The evening belted out some melodious patriotic theme musicals of yesteryears which was followed by ‘SAREGAMA’ youthful musical pop and fusion music and songs presented by the cream of young talent from India.

Ajai Agnihotri, FIA President welcoming the guests said the evening’s gala provides an outstanding opportunity to showcase our ideals of patriotism and indianness while affording us a collective chance to celebrate India’s great milestone event. Ajai Agnihotri further said “I am honored to have been bestowed with the opportunity to serve as the President of FIA – an august umbrella organization of three decades which served the Chicago community with great fervor and undying devotion. President Agnihotri added FIA leadership circle encompasses deeply loyal Indian-Americans who have demonstrated on every occasion that they not only make significant contributions to the country of adoption the Unite States of America; but more importantly, they make stellar contributions in promoting Indian nationalism and its global distinction.

Ravi Harsoor, Banquet Chairman addressing the gathering said he would strive hard in making FIA the destination for Indian Independence Day and Republic Day celebrations in the state of Illinois. Ravi Harsoor said it is his avowed goal to work diligently towards fostering a sense of unity in the community in order to work towards the shared goals and values. Ravi Harsoor pledged his unwavering commitment to help heighten FIA to play more proactive role in other areas of community development.

Mr. Niranjan Shah, doyen of the FIA and a respected community leader congratulated FIA for forging great unity in strength and hosting a series of events that seeks to honor India’s Independence. Mr. Niranjan Shah thanked the leaders of FIA for their steadfast commitment to community service.

Iftekhar Shareef, FIA’s Trustee Chair took to the stage to invite esteemed awardees for their extraordinary contributions to the community and for their exceptional leadership. Iftekhar Shareef invited Consul General Smt. Mukta Tomar Dutta and Mr. Niranjan Shah to jointly present the awards to Chandresh Brahmbhatt for business excellence, Jesal Patel, Trustee of Lincolnwood for his contribution in development of Lincolnwood village, Dr. Manish Brahmbhatt for his devotion to providing generous professional medical services and assistance , Harish Bhatt for his leadership role in FIA. After these presentations, Mr. Shareef made solemn remarks for the posthumous award to late Mr. Satwant Singh Kaleka for his valor and bravery in saving lives by falling in the line of fire at Sikh Temple in Oak creek, Wisconsin. Iftekhar Shareef urged all the guests to rise and observe a minute silence in memory of the fallen at the Sikh Temple and solicited prayers for Police Officer Brian Murphy who is took the bullet while stopping the killer.

Chief Guest Smt. Mukta Dutta Tomar, Consul General of India in Chicago expressed appreciation and thanks to the leaders of FIA,Chicago for hosting a wonderful event – which she added — allows us to celebrate this joyous occasion with one another and be thankful for what we have and strive for a better future. Consul General Tomar praised FIA for being in existense since last 30 years and working for the key issues important to the community and also for promoting our culture in USA.

Consul General Smt. Mukta Dutta Tomar echoing the remarks of Prime Minister Manmohan Singh delivered on Red Fort in New Delhi said “I believe that no power in the world can stop India from achieving new heights of progress and development. What is needed is that we work together as one people for the success of our country. Let us once more resolve that we will continue to work for a progressive, modem and prosperous India.”

Making reference to India’s ethos, Consul General Tomar said the Indian culture promotes inclusiveness and tolerance in the face of all odds, which is often misconstrued as weakness. We are not weak. We are tolerant which has helped us to patiently overcome many barriers in our long journey since we achieved independence.

Consul General Mukta Tomar also took a moment to reflect on the senseless loss of lives at Gurudwara in Wisconsin and said we must be resilient in the face of such attacks and show that we are united against such nonsensical violence. We must promote understanding and acceptance; replace hate with compassion toward one another, regardless of background, race or religion.

Keerthi Kumar Ravoori, Executive Vice President acknowledged and recognized dignitaries and sponsors who helped host three major events in celebration of India’s Independence Day. Mina & Kishore Purohit was presented a plaque in recognition of their excellence in community TV Journalism. Sanket Shruti served as the emcee for the evening..

The evening set an extraordinary tone when Miss. Komal Sharma stepped on the stage and presented a dazzling solo dance performance which evoked thunderous applause.

Earlier, Congressman Joe Walsh of the 8th congressional district – in his remarks – said I truly believe that Indian Americans with their multi-continent experiences, with their advanced technical skills in Science, Engineering, Medicine, Education and most importantly, Business can guide American out its current troubles of rising deficit. Congressman Joe Walsh said Indian Americans are a key part of the growth of our economy.
The pulsating musical presentation of the evening kept the guests enjoying till the late hour of the night.

FIA-Chicago hosts ceremonial Flag hoisting in Chicago downtown
The Federation of Indian Associations, Chicago hosted a ceremonial Indian tri-color flag hoisting in the heart of Chicago’s downtown on the Daley Plaza with State Senator Ira Silverstein, Alderman Debra Silverstein OF 50 Th. Ward, Alderman Ameya Pawar lending hands in hoisting one of the largest Indian flag atop the towering pole in the middle of the Daley Plaza in CHicago.

Following the flag hoisting, Ranjit Ganguly, event chair introduced the downtown event. FIA President Ajai Agnihotri briefly welcomed the guests assembled on the Daley Plaza and extended invitation to the guests to join FIA at the parade and the banquet which was followed by remarks from Iftekhar Shareef praising the sacrifices of the freedom fighters and mention about the first flag hoisting done by Pandit Jawahar Lal Nehru. Vandana Walia, Event Co-Chair hosted a culturally rich dance performances rooted in India’s tradition. The traditional cultural dance performances were intermingled with fusion contemporary dance performances by the young artists which lasted more than 2 hours.