Path to Happiness by Swami Mukundananda 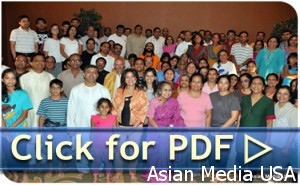 Chicago IL: The quest for spiritual happiness is a practical necessity, not a lofty ideal, says a Swami Mukundananda Ji who finished a seven-day residence Saturday, July 14 – at the Meadows Club, Rolling Meadows, IL

Swami Mukundananda Ji is a spiritual leader whose lectures apply the ancient Vedas, or Hindu scriptures, to the challenges of 21st-century existence. He teaches audiences how to manage stress through yoga and meditation.

“Spirituality is not removed from our mundane practical life,” he says. “If practiced for some time on a daily basis, it helps us in doing all the other activities throughout the day as well and provides us a true Path to Happiness.

His program “Path to Happiness” ran from 11:00 a.m. to 2 p.m. Saturday and Sunday and 6 to 9 p.m. July 8 through 14. The series was a free and open to the public, but registration was required. Attended by at least 1500+ devotees through the 7 days, the program was a real treat for Body, Mind and Soul.

Mr. Madan Kulkarni, chairman of the Meadows Club, says “I was so impressed with Swami ji, the way he communicated, the way he taught Vedic knowledge in practical life and is truly a savior for Human kind in today’s world”. The positive vibrations brought by Swami and his program from devotees will provide a calming effect to the venue.

But he also has an MBA from the Indian Institute of Management, India’s preeminent business school. He was a mechanical engineer before he renounced his position, at age 23, to pursue a life of spiritual devotion. In addition to lecturing at Hindu temples around the country, he’s spoken to staff at Google headquarters in California and the Kellogg School of Management in Illinois.

“A lot of Indians who have come to the U.S.A. from India share the same education as I do,” says Swami ji. “They are engineers and MBAs. They do have this desire for spiritual knowledge. They would like to hear it in terms that make sense to them. When they come across a Swamiji who has the same educational background, that gives them confidence that they can relate to the message and the manner in which it is presented.”
The ancient Hindu gods might not have foreseen that their wisdom could be applied to such matters as corporate management, but Swami ji says the teachings transcend millennia.

Swami ji discussed and taught breathing techniques, body relaxation and proper diet. His particular form of yoga includes spiritual exercises, a component he says is neglected by most yoga studios in the United States.

Mayor of Rolling Meadows, Mr. Tom Rooney, provided a highest Proclamation to Swami ji for bringing Spirituality to the City. He appreciated the message and commented how Swami ji has been instrumental in breaking the boundaries of culture and reaching out to everybody and making the world a better place.

The entire atmosphere in Meadows Club was electrified as the program progressed through its course. Devotees enjoyed every moment and drank the divine nectar of happiness. These seven days did provide a lot of tools for attendees to deal with the age old question of ‘What is True Happiness?, How to achieve it? and How to sustain it?”
Swami Ji will be back in Chicago Land area in July 2013 – with another electrifying program. Stay tuned!!!!
Additional Information: