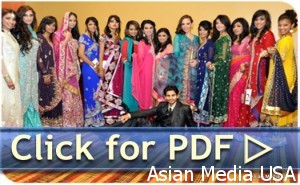 Program was started by wonderful introduction and encouraging Speech by Mc Gaurav Arora, who is an expert in delivering vigorous speech and giving momentum to any concert/program along with Noman Khan, person behind the success of this event introducing Sunil Shah, Chief Guest of this program. Sunil Shah and Rita Shah are personalities known by almost all. Sunil Shah happened to be Founder President of FIAA. In his short but sweet speech, wished great success in their entire carrier to all upcoming young artists and commended their efforts.

There were three Fashion Shows presented by more than 24 perfectly shaped familiar Models. Performances by youths representing Ye Chhez was really most memorable, scintillating, swashbuckling keeping all zooming and making the entire atmosphere very lively. They also witnessed some mesmerizing dance performances by one of the popular entertainment group in Chicago YEH CHEEZ, which was led by extremely talented Noman Khan and his team. Dazzling Lights and synchronized music system were provided by the Meadows Club under the management of Mr. Tariq Khan.

This Finale was unlike any other! It started off with Fusion dance of Acrobats, hip hop and Bollywood by Anand Bhatt. From mind blowing Flips and Tricks to hip hop and traditional Bollywood dance. This Dance Finale went on for over 22 minutes, and it mesmerized the crowd to the point where people were screaming “once more!” at the end of it. This Segment was carried out by the coordinator and the sponsor of the program, the one and only, Noman Khan, Miss India IL Nishma Patel, Marvelous Dancer and unbelievable stunt man Anand Bhatt, Deebang (The Fearless) Tanya Sharma and last but not least Mr.Deewana who makes people fall in love with him, Kevin Tony.

This 22 minutes dance segment was not so easy to carry out. When it comes to performances, people think going on stage dancing will do it! BUT these 5 knew the secret to winning the audiences heart! Many performances get boring after just 3 minutes but not this one. With crowd expecting more and more as Desi Summer Bash went on. It became responsibility of these 5 to carry out a performance that everyone would remember. And they did a spectacular job carrying this out. Till the last second, These incredible five kept the audience cheering. Noman with his stunning style and Bolloywood jalwa, Nishma with her Ms.India glamour and ravishing looks, Tanya with her super model looks and outstanding energy, Kevin the handsome hunk with his cool moves and FINALLY the unforgettable Anand with his muscular physique, incredible dance, and acrobatic skills. They undoubtedly kept each and everyone in the crowd on their toes till the last moment and left them asking for more.

Noman and Tanya make people laugh with a cute song “zubi dubi” and Nishma brings people to the edge of the seat with “Chikni Chameli” We see a grand finale of this segment with the crowd going nuts and with their claps and cheers echoing in the halls of Meadows club Anand, Noman, Kevin, Tanya and Nishma end the segment with a blast on the song “Desi Boyz”. Crowds cheers all around when these incredible 5 take a bow after their performance.

Fashion shows were sponsored by Taj Saree Palace, and others where these boutiques were proud to present their hottest collection of designer clothes, which dazzled the audience as 24 models walked up and down the ramp to demonstrate 2012 collection line for ethnic wear wedding array of Dresses for Dulhans and couples. The fashion shows were managed under the coordination of big fashion coordinators like, Noman Khan, Diya Khan, Hira Hanif and Farah Razzak.

Zaheer Abbas, Saregama fame and idol of thousands rocked the audience with his melodious and spirited voice singing many famous songs in company of his Musical team. Next was a wonderful performance by Zaheer Abbas winner of Sa Re Ga Ma Pa Challenge in 2009. Everyone liked Zaheer’s simplicity and energy focused more on perfect performance.

Mary Ann Tony has been concentrating more on English Pop music, and Classical and Christian Gospel Music recently. She has learned five years of Carnatic Music and took two semesters of Western Classical Music lessons from Rock valley College. Some of her achievements in singing include winning the national level competition in India for singing Western music for the Youth Festival among all the Universities in India and the First Prize winner for singing Light Music for the State Level Competition in Kerala, India. She has also performed for an Indian show in Dubai that was shown in the Asianet Channel. She can sings Hindi, Tamil and Malayalam songs. She performed 2 Hindi songs for the Desi Summer Bash. The two songs that she performed were Mujhe Rang de from the movie Thakshak, originally sung by Asha Bhosle and Pyar hua chup kaisa from the movie 1942 Love story, originally sung by Kavita Krishnamurthy. Everyone applauded and cheered while she was performing and she really liked how active they were. It really encouraged her when the crowd danced and clapped their hands to the beats of the song.

Megha Mathur – Winner of the Miss Teen India Illinois Teen pageant presented an outstanding semi-classical dance, with thunderous applause from the house full audience! She is also a radio show host for Desi Junction and has won numerous prestigious awards in several dancing competitions in Illinois, Michigan, and Indiana. In an interview with Megha’s parents they said that Megha started appearing on the stage at the age four and has an amazing talent and passion for fusion dance, mixing Bharatnatyam and Kathak with Bollywood style.

Next was the dance performed by Nikita Khara “Beat of Passion” from the movie Taal, composted by A. R. Rahman. The dance was a fusion of contemporary dance and Bharatanatyam dance, choreographed by Nikita, herself. Nikita started Bharatanatyam training at the tender age of 5, and she completed her Bharatanatyam Arangetram at the age of 14. From starting out with the style of Baratanatyam, she has expanded her dance knowledge into the styles of Indian folk dancing, contemporary dance, modern dance and hip-hop. She has also choreographed awards winning dances for various competitions and social events.

Suresh Bodiwala Chairman and Jyotikumar Chokshi, Editor of Asian Media had an opportunity to conduct interview regarding perspective of the “Desi Summer Bash” with prominent community leader and founder of new FIA Mr. Sunil Shah where he said that ” The entire event was spell bounding. Full of energy, inner passion and tremendous hard work. Kudos to Noman Khan and the entire team who organized this show. full of talented youth who kept everyone glued to their chairs. Fashion show was mind boggling with beautiful costumes from Taj Saree place. Beautiful songs were sung by Mahijit Virdi and Shahzad and above all Zaheer Abaas singing was mesmerizing and invited me on the stage to dance on popular number of film Dabaang Tere Mast Mast do Nain. We truly and thoroughly enjoyed the whole event especially the dance performance medley by Noman Khan, Tanya, Bhatt etc they were just phenomenal. This kind of event showcases the talent of our very own
youth and we all should encourage them by being part of such shows.