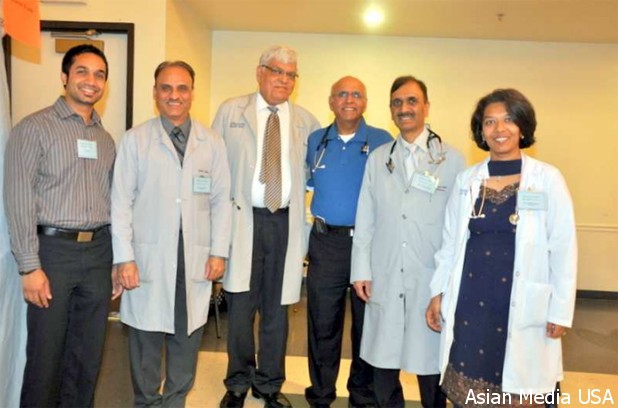 Bensenville IL: Bensenville IL: The annual Health Fair was successfully concluded at Manav Seva Mandir, 101 S Church Rd Bensenville, IL on Sunday, May 22, 2011 from 8.15 AM to 11 AM. An annual Health Fair was organized at Manav Seva Mandir with 350 patients getting free health check up. The event took place in Mahalakshmi hall. Long lines of participants early in the morning show the success of this activity for the last several years. This year we gave them numbers as they walk in. and then they can seat in the temple in chairs. They call by numbers, fill out form and start tests without waiting in lines. As per Jayantibhai Thakkar, this was the 28th Health Fair coordinated by him. The first one was started at Manav Seva Mandir back in 1989 in Manav Seva Mandir and he continued this service in other temples like Midwest Swaminarayan temple, Vashnav Samaj temple and Jalaram temple. It is important to recognize his selfless and dedicated work on people’s health check up, by which more than 7,800 patients have benefited so far.

Volunteers were seen very busy at the blood draw tables. This service was provided by Bhagvat Thakkar Bakul Thakkar, Falguni Thakkar, Sushma Bhatt, Hiren Khambhati and team of 12 other medical professional. .Blood samples of 310 patients were collected. These samples were sent to the Genesis Clinical laboratory for testing. The reports will be reviewed by the doctors and will be mailed to each patient in three weeks with the follow up instructions.

Urine Analysis was performed by Dimple Thakkar, Alkaben Patel , Vaishali Madeha , Falguni Shah, Khambhati and other volunteers. The patients were seen by Triage physicians Dr. Jyotiben Shah who recommended blood, urine and EKG tests as required this time Diabetic test A1C and Thyroid test TSH also will be performed as recommended by doctor.

There were five machines to provided EKG tests for Male and female patients over the age of 55. The volunteers include Rita Parikh, Shobha Tevar, Chhaya Marfatia, Kishan Thakkar, Jaya Patel , Naren Barot and Urmila Pandya. EKG results were interpreted by Cardiologists vice chairman of the mandir ,Dr Shirish Shah. About 135 EKG tests were performed.

Nutritional and Diet consultation was provided by Dietitian Sweta Sheth. Mammogram and Peps registration was done by June Yang, Sarah RO and Carla Zang from Xilin Association in Naperville, IL. Lots of patient was treated using Accu Pressure technique by Chimanlal Bheda and Hansaben Soneji. Long line was seen for these services The testing was continued well beyond the completion of the fair until 2:00 pm. This Year, Hearing Testing was also provided by Hashumati Sheth , Chandra Shrinivas, Gopali Sheth, and Karim P. Das. Physical Therapy and necessary exercise were showed by Alpan Parikh and Sonal Gandhi. The Health Fair was well organized and went very smoothly. Many happy faces were seen that they received the medical services they needed at one place without any cost to them. Temple provided Tea, Coffee, light food and cookies to all patients and launch for volunteers.