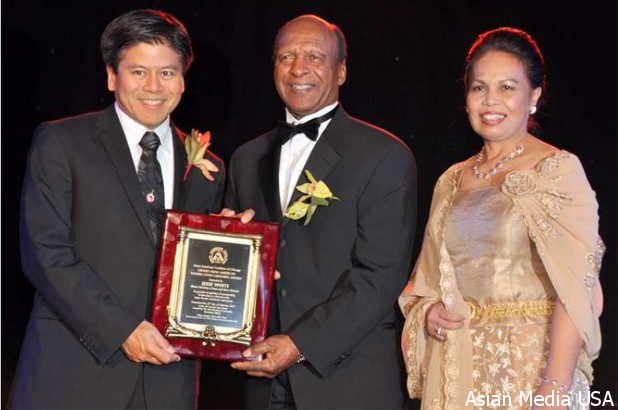 Rosemont, IL: The Lunar New Year is approaching on the Chinese calendar. Though based on the Chinese calendar, the lunar new year is also celebrated by the Vietnamese, Korean and Taiwanese and other Asian communities. The Thai American community of Chicago hosted the Asian American Coalition of Chicago’s 29th Annual Lunar New Year Celebration in grand style, pomp and pageantry on February 25, 2012, at the Hyatt Regency O’Hare, in Rosemont, Illinois. The theme of this year’s event was “It’s time”. More than 1000 people attended this mega event. A variety of South Asian dances were part of this colorful celebration.

The Asian American Coalition of Chicago (AACC), was founded in 1984 and is represented by over 16 cultures including the Bangladeshi, Burmese, Cambodian, Chinese, Filipino, Indian, Indonesian, Japanese, Korean, Laotian, Malaysian, Nepalese, Pakistani, Sri Lankan, Thai and Vietnamese communities. The Asian American Festival helps to celebrate these rich heritages and diverse histories. AACC organizes and promotes equal opportunities in government, education, economic development, and international affairs in order to advance the integration of all Asian Americans into the mainstream of society. Every year a different Asian community takes turn playing host to the Lunar New Year gala. This year it was the Thai American Community’s turn, which has thrice before (1989, 1996 and 2004) hosted this event.

Cocktail reception, silent auction and exhibits began at 5:30 p.m. During the Silent Auction Thai Flood Victims of 2011 were remembered. Cocktail Reception was accompanied by a performance on the Ranat Ek, a Thai Xylophone and the Exhibition consisted of various facets. The Thai American Community of Chicago land was under the Chairmanship of Vallapa Kangsri and Co- Chairmanship of Arun Sampanthavivat. The program started with a reception and open microphone forum in the foyer, followed by dinner, cultural entertainment and awards ceremonies.

Celebrity presenters of the evening were Steve Dolinsky and Nancy Loo. Opening Ceremony was presented in a beautiful and astonishing manner by presenting the Chair and Co- Chair under coverage of Lion and Dragon. They were escorted to the stage. Ceremonial beginning was made by performing Traditional Lion Dance, performed by Chicago Dragons Athletic Association, followed by Thai Classical Dance performed by Thai Classical Dance School of Thai Buddhist Temple.

Posting of colors and US National Anthem were sung by Ms. Monchaya Jetabut and Thai National Anthem was sung by Mr. Bannapradist. Opening remarks were made by Vallapa Kongsri, Event Chair. In her opening remarks, she recognized all those who helped in making this event successful and also welcomed all the dignitaries present.

Introduction of Keynote Speaker was given by The Hon. Narang Sasitron, Consul General, The Royal Thai Consulate General in Chicago. In his introduction, he highlighted various facets of Keynote Speaker, His Excellency Prof. Kantathi Suphamongkhon, who happens to be a Visiting Professor of Law and Diplomacy from University of California, in Los Angeles as well as Senior Fellow of the Burkle Center for International Relations at UCLA. He has worked in various organizations in various capacities.

His Excellency Prof. Kantathi Suphamonkhon, The 39th Minister of Foreign Affairs of Kingdom of Thailand delivered his Keynote Speech on the occasion, emphasizing on the importance of Asian American Coalition, and its role in the American Economy as well as the political scene. He stressed on the fact that Asian community has a pivotal role to play in the US economy and lead to expansion in the business world. He pointed out the abundant scope available to Asians living in America in fields such as Study, Employment and Business.

An Asian Dinner was served, simultaneously Live Jazz Performance by Jeff Chan’s Jazz Band continued. Remarks by the Global Sponsor, The Hartford was presented by Karen Wood, Asst. Vice President of Sales and Distribution. OugiZukushi, “Collection of Fans” was performed by Fujima Ryu of Chicago.

AWARDS
Raymond B. Lee, Owner and President of Golden Country Oriental Food Co. (since 1979) and Golden Ocean Seafood, Inc. (since 1984) has been named the 2012 Pan Asian American Ping Tom Memorial Awardee. Raymond Lee built his business from a small warehouse on Wells Street in Chicago to what is now one of the largest Asian, African, Caribbean and Oriental wholesale food importers and distributors in the United States. Lee was instrumental in the formation of the Asian American Alliance and served as the President of its Board for three years (1996-1999) and as Director Asian American Alliance (Asian American Small Business Center) (from 1996-2002). The Alliance was an organization comprised of various Asian Chambers of Commerce (Chinese, Korean, Filipino and Vietnamese). He also served as a Chicago Park District Commissioner (1988-
1989) and Chicago Board of Education member (1989-1990), becoming the first Asian American appointed to each such position, at a time when there was little or no representation of Asian Pacific Americans on such important boards in Chicago.

Among numerous community and civic service affiliations, Lee is past Chairman, President, and current Secretary of the Chicago Chinatown Chamber of Commerce (service in various roles, 1983-present); Managing Director, Chinatown Parking Corporation (service since 1984); Chairman of the Board, Chinese American Development Corporation (since 1985); a member of the Ping Tom Memorial Park Advisory Council (since 1994); and a member of the Coalition for a Better Chinese American Community (2001- present). The 2012 recipient of the Coalition’s Grand Asian American Sandra Otaka Memorial Award, is Illinois Secretary of State Jesse White. This award is periodically presented to someone of non-Asian descent, who has made significant contributions to the Asian Pacific American community. The Coalition renamed its Grand Asian Award in 2010 after the late Cook County Circuit Court Judge Sandra Otaka.

The Coalition announces its 2012 Youth Who Excels Award recipients as follows:

An event of this grand scale is held only once a year, Lunar New Year is traditionally the single largest organized annual event in Chicago’s Asian American community. According to the 2000 Census, the Asian Pacific American population in Illinois was approximately 423,603, or 8.6% of the statewide population. The Vietnamese American community of Chicago will be next year’s host of this event.

Major sponsors of the event were: The Hartford as a $10,000 Global Sponsor, Wintrust Financial as a $10,000 Pan Asian Sponsor and American Family Insurance and CNA as $5,000 Continental Sponsors, among others.