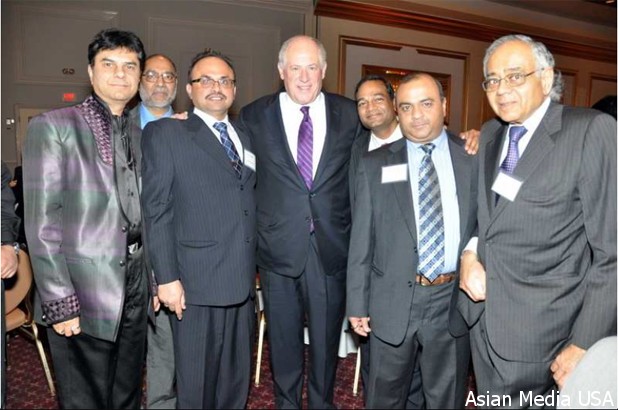 As the Master of Ceremony Bob Peickert, Chair, Democratic Party of DuPage County welcomed the guests and kept the audience spellbound with his wit and wisdom throughout the function. Bob Peickert is a long time resident of DuPage County . He has already announcing his candidacy for the position of Board member of the DuPage County Board serving District 1. Bob is a 34 year old resident of DuPage County and resides in Elmhurst with his wife, Pat. Bob is a former math teacher and has spent 25 years as a director of a teachers’ organization working to improve our educational systems. He is now a small business owner and member of the Elmhurst Chamber of Commerce. Bob has raised his family in DuPage and is dedicated to improve the future opportunities for the residents of Dupage county as well as for his family that includes 5 grandchildren.

Bob Peickert, chairman of the Democratic Party said ” Operation: Turn DuPage Blue has finally broken the Republican party’s “stranglehold” in our county. It’s exciting to see the election results, but we still have our work cut out for us.”

He introduced the keynote speaker Mr. Thom Hartmann, who is the Nation’s #1 Progressive Radio, Talk Show Host – WCPT 820 AM, New York Times Best Seller Author of 22 books and internationally known Speaker on Culture and Communications at this year’s gala. Chairman of the DPDC siad “He is an architect of so many of the political grassroots organizing principles you see at work throughout the country today, and he is a tremendously inspiring speaker.”

Governor Pat Quinn in his brief address said that he grew up in Dupage County, and wanted to thank everyone because they had elected him in the last election. He said that in 2012 he wanted to make sure that President Obama gets elected for the second term. He specially thanked Bob Peickert, his committee members who supported him, because they worked hard from door to door and making lots of phone calls. Governor Quinn in his speech said that Illinois has created more jobs, expanded early childhood programs, K-12 and special education programs, veterans benefits and increased medicaid benefits for Illinois seniors. He pointed out the diversity in Dupage county and the vast presence of various ethnic populations that have made Dupage County their home. He urged everyone to actively participate in the democratic process and work towards community harmony.

Bob Peickert, chairman of the Democratic organization Operation introduced the Keynote Speaker Thom Hartmann. Thom Hartman is an American radio host, author, former psychotherapist and entrepreneur, and progressive political commentator. His nationally-syndicated radio show, The Thom Hartmann Program, airs in the United States and has 2.75 million listeners a week. Mr. Hartmann gave an inspiring speech comparing the diferences between Democrats and Republicans. He asked everyone to get involved for the benefit of the community and the country.

Bob Jeffers received the Katherine “Tinker” Harvey Pioneer Award .This is an award that is presented annually in honor of Kathryn “Tinker” Harvey . Tinker has been involved with the DPDC for nearly 50 years. He has spent the last 40 years as treasurer for the Democratic organization.

Nasir Jahangir was presented with Precinct Committeeman of the Year Award. Mr. Jahangir was born in Pakistan and served 14 years in the US Air Force. He has worked for several political campaigns and helped the Indo-Pak community get involved in the democratic process of our county.