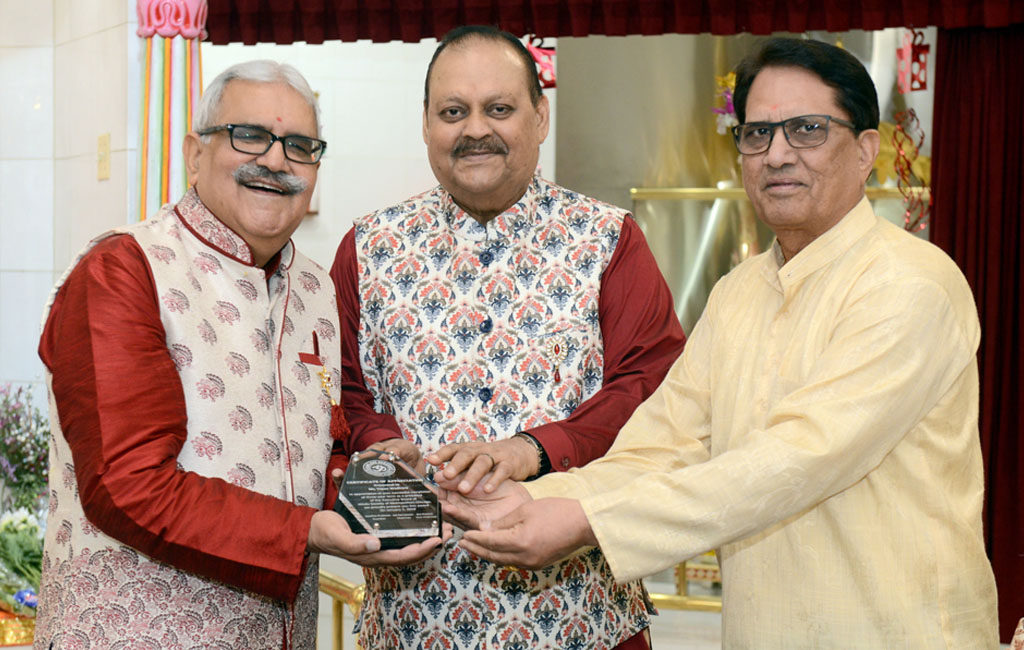 Chicago IL: January 1st 2019, Tuesday, started off with a Bang in the premises of Hari Om Mandir, Medinah, IL. Huge crowds gathered in the Temple to seek Blessings from God Almighty on this auspicious day, and prayed for a healthy, wealthy and prosperous Year ahead. Smt. Rama Kapoor & Mr. Subhash Sharma, along with their Bhajan Mandli, and Mr. Jignesh Pathak on the Dholak, recited the “Sunderkand Path” to seek Blessings from Lord Hanuman Ji for a blessed year ahead.

Nature too co-operated and the Sun shone brightly with moderate temperatures, as Devotees in large numbers thronged the Mandir to offer their prayers and seek blessings on this very first day of the New Year. The Mandir was beautifully decorated with Buntings, dazzling Streamers, Banners, Flowers, Bells etc to enhance the ambience for the celebrations. As the Devotees walked in, they were welcomed with Hanuman Ji Sash around the neck, and handed over the holy Sunderkand Path Book to sing along. 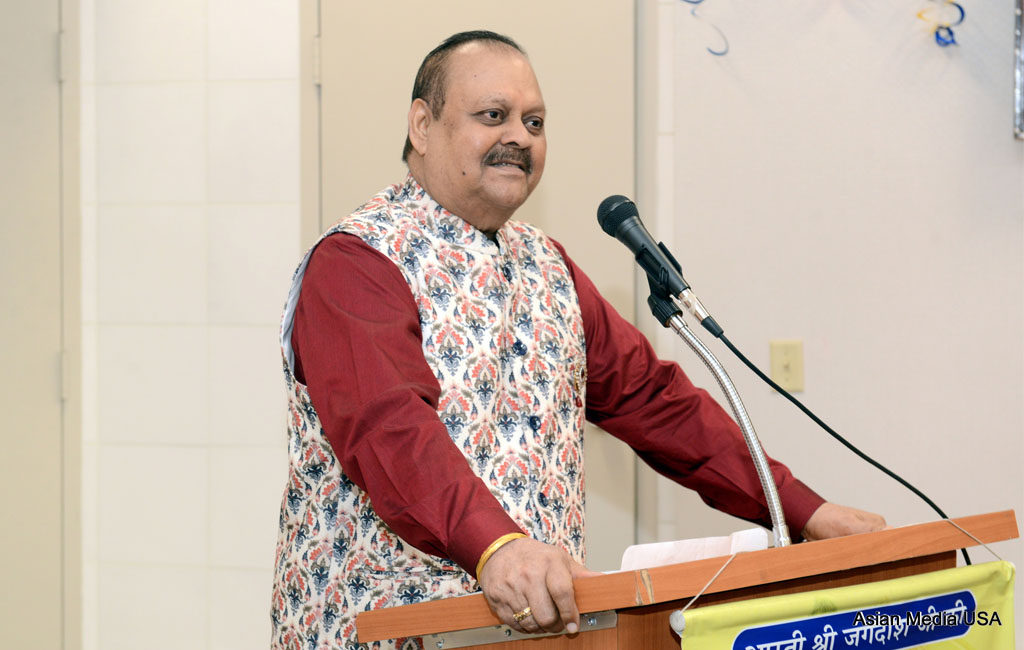 In Hari Om Mandir, the 1st of January, is also a day of administrative activity. The 2 Boards – Executive Board (EB) and Board of Trustees (BOT) that run the show all year round, are introduced to the general Congregation. It is time to honor and acknowledge the services of the outgoing Members who have completed their term, and welcome aboard New Members, who will be taking charge and serving the community in 2019.

Once again, Mr. Vipan Wadhera was re-elected as the President of the Executive Board for the next term of 3 years. This is for the first time, that any President has been elected consecutively for 2 Terms in a row. Amidst huge applause and appreciation, the Guardian of the Temple, Mr. Ayodhia Salwan made the announcement, saying that this was the peoples’ choice and demand, as Mr. Wadhera had won the hearts of ONE & ALL with his dedication and outstanding leadership qualities.  Mr. Vipan Wadhera then thanked ALL his team Members for their continued support throughout the year. Plaques were also was awarded to the outgoing Members:  Mrs. Shubh Sharma & Mr. Ashok Sharma who had completed their terms.

The new Members on the Team were then introduced:  Mrs. Pooja Sharma, the youngest addition to the EB, appointed as the Food & Prasad In charge in 2019, was welcomed amongst clapping and cheers from the crowd. Mrs. Anita Rawal, appointed as the Secretary, was also given a warm welcome back! 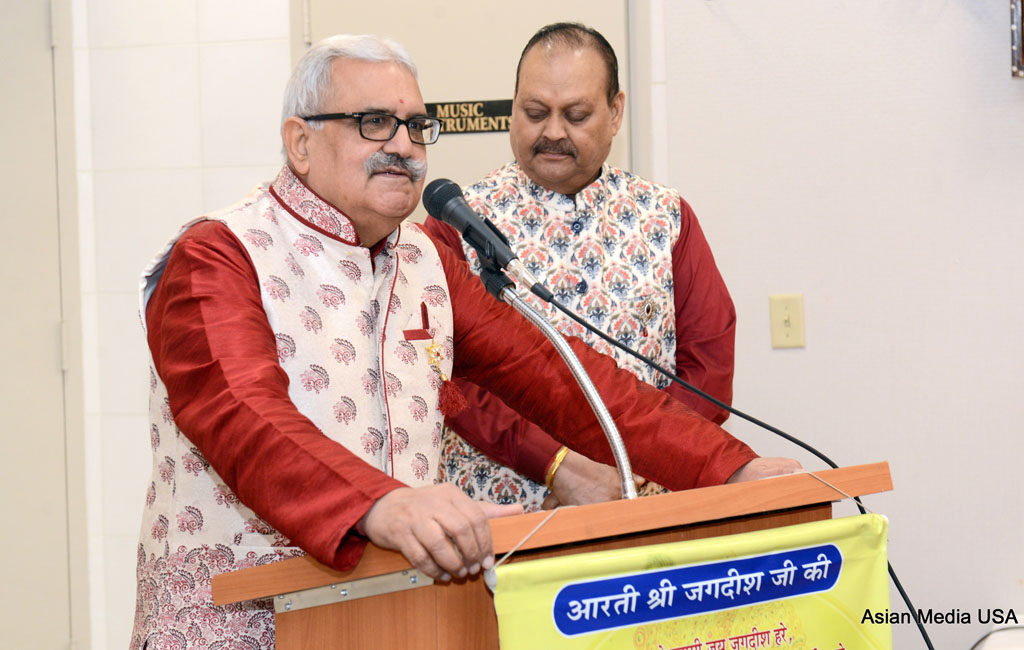 Mr. Satpal Salwan, Chairman Board of Trustees, wished everybody a “Happy New Year” and congratulated the EB Team for a successful 2018, when several programs had been organized and the Temple was on the right path of Growth and Service to the Community.

On this day, members from the Community/ Devotees/Volunteers who have served the Mandir in various ways, are also honored for their Contributions. This year, Kalsi Builders, Krishan Tejpal, Satpal Salwan & Madhu Gupta was chosen for their outstanding services to the HOM and the Society at large. Mr. Brij Sharma and Mr. Ayodhia Salwan read out the Citations and presented the Recognition Awards.

As Guardian of the Temple, Mr. Ayodhia Salwan also wished everyone a Happy New Year and prayed to God Almighty for the wellbeing of ALL the members of our Hari Om Parivar and the Society in general. He also thanked the Media People – Suresh Bodiwala from Asian Media and Vandana Jhingan from TV Asia for covering all the important Festivals/Events held in the Hari Om Mandir.

Mr. Vipan Wadhera also gave a brief update on the upcoming Construction Projects and the Religious Programs in 2019. He invited everyone to join the “Pran Pratishtha Ceremony” of Baba Balak Nath Jis Murti on Basant Panchami, Feb.10, 2019. A renowned Singer and Baba Ji’s Bhakt, Bunty Bawa from California would be singing the glory of Baba Balak Nath on that day. The Murti which has already been installed, will be unveiled after performing all the holy rituals. All the prestigious Donors would be joining the Pooja Ceremony and be a part of this memorable Event.

A Grand Lunch, sponsored by the Salwan Family/STAR FOODS was served after the Program. “Bhature Channa” – a very sumptuous and appropriate Hot North Indian Meal on a COLD DAY, along with hot Masala Tea, was very welcome and relished by everybody. People exchanged greetings, good wishes, embraced each other, wishing for peace and wellbeing of all mankind.