Chicago IL: Chicago land’s much awaited dream came true when musical maestro, Ilaiyaraaja, performed live with the Budapest Symphony Orchestra from Hungary and Indian Classical Musicians on Saturday March 24 at the Naperville Yard Center. The 55 musicians, 10 singers and 1 legend gave a spectacular performance that rocks music lovers in Midwest.A name synonymous with the Indian Music IndustryRaaja is an incomparable genius who totally transformed the perception of people towards film music.Cloud9 events proudly presented the much awaited concert that enthralled an audience of 4000 plus who were left mesmerized by his memorable musical compositions. 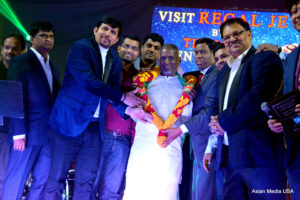 The live concert was performed by singers Chithra, Mano, Haricharan and Rahul Nambiar. They were accompanied by a talented orchestra of 50 musicians. They performed a total of 39 songs in both Tamil and Telugu languages.

Ilaiyaraaja’s acumen and knowledge of the aesthetics of music and cinema is what sets him apart from the rest. He is a multifaceted artist and has composed over 6000 songs and worked for 1000movies. Raaja, as he is popularly known and affectionately called, comes from a family of musicians has won five Indian National Film Awards; three for Best Music Direction and two for Best Background Score.   In 2010 he received the Padma Bhushan, awarded by the Government of India and in 2018 he was presented the Padma Vibhushan award which is the second-highest civilian award of the Republic of India. The living legend paid an emotional tribute to his audience by singing that he would continue to make music for his fans living seven seas away from their motherland. This gesture deeply touched the audience and made them appreciate his love for music. Over 35 songs sung at the concert included “Jananijanani – Thai Mookambigai”,  “Om sivoham – Naankadavul”,  “Jagadhanandhakaaraka- Telugu”, “Ram ramsalame ram ram-Hey Ram”, “Malaiyilyaaro- Kshathriyan”, “Ninukkorivarnam-Gharshana-Telugu”, “Yen Iniyaponnila-Moodu Pani”, “Madaithirandhu-Nizhalgal”, “Abbanitheeyani-Telugu”, “SendhooraPoove- Sirimallepoove-Telugu” and so on.

S. Chithra or simply Chithra, is an Indian playback singer from Kerala. Chithra also sings Indianclassical, devotional, and popular music. She has sung in a number of languages that include Urdu, Latin, Arabic, Sinhalese and English. She has recorded over 25,000 Songs for various films and music-albums. She is a recipient of six National Film Awards, seven Film fare Awards South and 35 different state film awards. Another popular singer, Nagoor Babu popularly known as Mano entertained the audience with his melodious voice. Mano is a playback singer, voice-over artist, actor, producer, and anchor and music composer. Haricharan comes from a family of music connoisseurs and started learning music at an early age of seven from. Sethu Mahadevan followed by legends like K. V. Narayanaswamy , T. M. Prabhavathi and P. S. Narayanaswamy .Rahul Nambiar is an Indian playback singer and live performer and has lent his voice for several advertisement jingles. 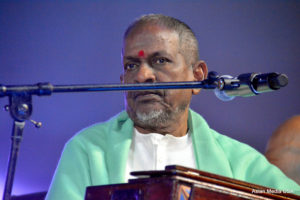