Hurricanes beat Rowdies to claim championship in a thrilling finale 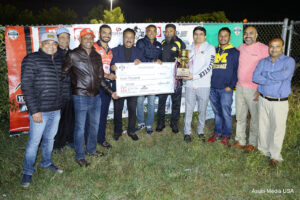 Asian Media USA © Chicago IL: Rowdies have been victorious in six out of eight of their league games that got them a berth directly into the final with 12points for Chicago Premier League’s finals. Hurricanes however seeded number 3 on the top three and have been beaten twice in their encounter with Rowdies. Hurricanes managed to get 10 points by winning five of their eight games to qualify for their finals The final was played between Chicago Rowdies and Chicago Hurricanes at the Skokie Sports Park amidst much fanfare. The event was sponsored by Nirav Foods, Usmania Fine Dining, Sabri Nihari, and Bawa Sports. Amongst dignitaries that attended the event were Mr. Sikander Iqbal (Deputy Director- Cook County), Mr. Pramod C Shah (Clerk-Village of Skokie) Masood Chick (Former President USACA & Former Pakistan Player). Owners of Nirav Foods, Manishkumar Patel and Arif Patel from Bawa Sports were also present at the event. President of (UCL & CPL) Mr. Adil Azeem Khan welcomed all the fans and dignitaries to the match proceedings. Rowdies won the toss and decided to bat first same as the last encounter with Hurricanes. The ground was a little on the damp side from the rains […]