Elk grove Village, Illinois: Northwest Republican Annual Picnic this year had a very new look. The attendance estimated at over 1200 was twice the usual crowd that gathers every year. This year was unusual as Ex-NRCC Chairman and currently the Chairman of House Rules Committee, Congressman Pete Sessions, made a special trip from Dallas to attend the picnic and secondly, over 400 Indian Americans joined in. Republican party is truly going all out to reach out to the minority and ethnic communities to build a new coalition. The occasion was to launch the campaign of Manju Goel, a first generation Indian American, for U.S. Congress. Chairman Sessions and Shalli Kumar, Chairman of Indian American Advisory Council of House Republican Conference, a Chicago native, are co-chair of Sessions-Kumar project to elect as many as 8-10 Indian Americans to Congress. In introducing Chairman Sessions to the crowd, he said “ Chairman Pete Sessions is no ordinary leader. As head of NRCC in 2009, right after Obama’s big victory, he challenged Nancy Pelosi that we are going to take back the house in 2010….we all know what happened , it was the biggest gain of seats in over 50 years. And then in […]

END_OF_DOCUMENT_TOKEN_TO_BE_REPLACED

Conference to Highlight Relevance of Indian Traditions to Contemporary Issues 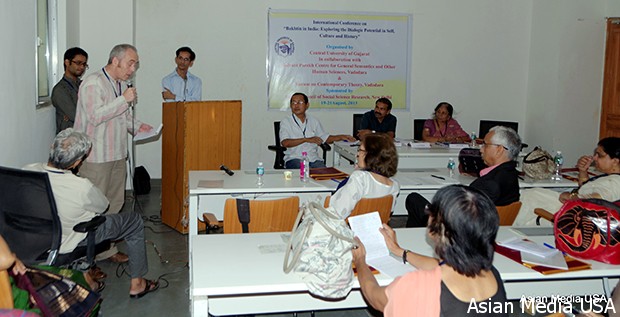 Gandhinagar, Gujarat state (India): A successful three-day international conference on “Bakhtin in India” held at Gandhinagar, the capital of the Indian state of Gujarat, concluded on August 21, 2013, with the resolution to host a complementary follow-up conference on the relevance of Indian traditions to contemporary global issues. The conference was hosted by Prof. EV Ramakrishnan, Chairperson of the Centre for Comparative Literature and Translation Studies at the Central University of Gujarat (CUG), and was jointly organized with Prof. Prafulla Kar, who directs The Balwant Parekh Center for General Semantics and Other Human Sciences and The Forum for Contemporary Theory both based in Baroda (Vadodara, Gujarat). “Bakhtin in India” explored the relevance of the ideas of this famous Russian theorist of the last century on polyphony, dialogue, carnival, etc., towards understanding and reassessing Indian culture. Well more than a hundred, mostly Indian, scholars and enthusiastic students participated and responded to a wide range of papers. Participants came mostly from Depts. of English and Comparative Literature keen on consolidating their understanding of this difficult, problematic, and controversial thinker. They sought to contribute something original to Bakhtinian studies by testing his models and concepts against Indian religious and secular practices both ancient […]

END_OF_DOCUMENT_TOKEN_TO_BE_REPLACED 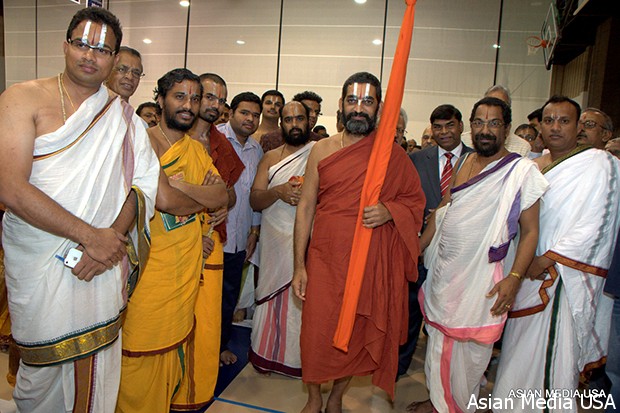 Chicago IL: The Aurora-based Illinois chapter of the Jeeyar Educational Trust (JET), headquartered in New Jersey, hosted a collective ritual performance of the “auspicious marriage of Lord Rama and his consort Sita” (Sita Rama Kalyanam) conducted by his HH Sri Chinna Jeeyar Swamiji. Preceded by an afternoon program of devotional songs and South Indian classical dances, the unusual event took place on September 7, 2013 at Harper College located in Palatine, Ill. The large number of registered participants seated in orderly rows with the divine images and material for worship neatly arranged before them filled the entire width and length of the gymnasium as many others followed with their eyes and ears from the stepped galleries on both sides. Chinna Jeeyar Swamiji is a “wandering monk” who belongs to the Vaishnava spiritual lineage of philosopher and reformer Acharya Shree Ramanuja. He walked between the rows distributing images of Rama, Sita, Lakshmana, and Hanuman, before explaining the philosophy underlying Hindu image-worship through a familiar idiom appealing to the American and Christian sensibility that did not hesitate to draw on the Bible. Inspired by his message and example, JET provides humanitarian services including schooling for tribals, fishermen, and the visually challenged, and […]

END_OF_DOCUMENT_TOKEN_TO_BE_REPLACED 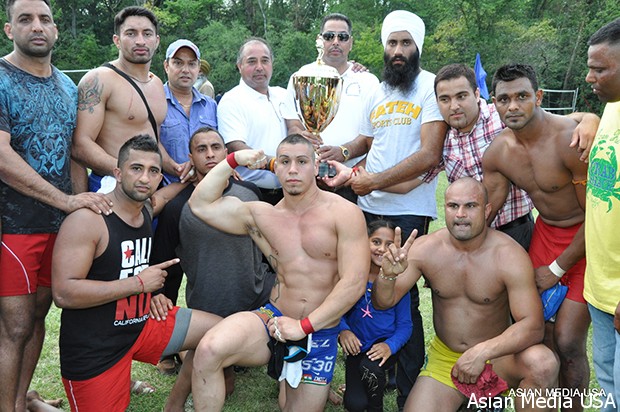 Chicago IL: Shere Punjab Sports & Cultural Club, Chicago held its annual Kabaddi cup tournament on September 1st at Busse Woods forest preserve which turned out to be a big festival of fun, food and sports. People not only from Chicagoland area but from Indiana, Ohio, Michigan and Wisconsin came in large numbers to enjoy this sports festival. The Kabaddi and Volleyball teams from Toronto, California, Indianapolis and Michigan participated in the tournament. In the evening a famous Punjabi folk singer Gill Hardeep entertained the audience with his popular songs for more than one and a half hour. Mr. Madan Popli from Milwaukee was the chief guest. In the open Kabaddi Cup matches the first prize was won by the Fateh Club, California defeating Miri Piri Sports Club, Indiana. The first prize of $5100 was sponsored by Jaswinder Singh Gill & Najar Singh Gill of Waukegan, Illinois and 2nd prize of $4100 was sponsored by Jaswinder Singh Jassi in memory of his father late. S. Major Singh. In under-21 kabaddi matches host Shere Punjab Sports club was the winner and Malton Sports club-Toronto (Canada) was the runner-up. Total four teams played. Under 21 Kabaddi prizes were given out by Baldev […]

END_OF_DOCUMENT_TOKEN_TO_BE_REPLACED 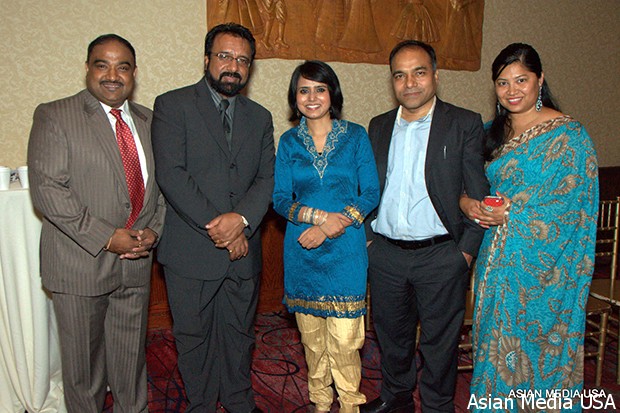 Chicago IL: In the last few years Chicago land has become the hub of Indian programs and activities, in the row a musical evening with Siniti Mishra a remarkable singer of SAREGAMAPA (the Judge of Chicago Indian Icon) was organized by Shri Prashant Mohanty an Oriya community activist with support from Cecil Joseph of IDF USA, local Singer Chetan Saini a.k.a DJ Magic and Ravi Rawat of India House. The sole motive was to raise funds for Uttarakhand flood relief. Over 300 people were present at the event The program was held on Saturday September 7, 2013 at India House Banquet Schaumburg. Sound system was sponsored and coordinated by Chetan Saini and Milan Banerji who were accompanied by Live Band known as Apna style Band: having Asif on Keyboard, Zeeshan on Bass Guitar, Subhashish on Tabla and Nadeem on Drum. The program was emceed by versatile Stage artists Noman Khan and Nishma Patel who welcomed the crowd and began with National Anthem sung by Karen Joseph and Indian by Noman Khan. This was followed by Slide show depicting beginning and progress of IDF highlighting its activities and recognition. Thereafter Noman khan described vows suffered by Uttarakhand Disaster and a Slide […]

END_OF_DOCUMENT_TOKEN_TO_BE_REPLACED 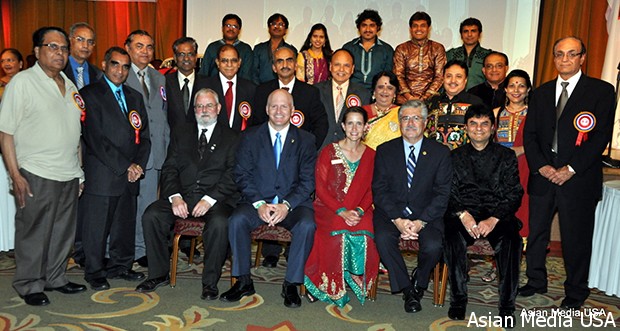 Chicago IL: Jalaram Mandir hosted its annual fundraising dinner with a Gujarati cultural program by the Swarkinnari ensemble on Friday, September 6, 2013 for a full house audience at The Meadows Club, Rolling Meadows, Ill. Around $70,000 was raised to fund temple expansion plans, from about 6400 to 14000 square feet, and for installation of the divine image (murti pratishtha) planned for 2013-14. Located at 425, Illinois Blvd, Hoffman Estates, Ill., the temple is dedicated to saint Jalaram, who is especially venerated in Kathiawad region of Gujarat state, most of all by his wider Thakkar community both in India and across the diaspora. Inaugurated in March 2008, temple membership has grown to over 4200 across North America. The event was coordinated by Jalaram Mandir’s Chief Priest, Board of Trustees, and Executive Committee. The event brochure featured messages of felicitation from Chairman of the Temple’s Board of Trustees Hasmukh Thakkar and Temple President Bhupendra Thakkar. After a social hour that lasted till 7:00 pm, MC Vipul Thakkar began with the invocation of Jalaram and welcomed the guests. Assisted by co-MC Ravi Thakkar, he Invited dignitaries and chief organizers to the stage, where the temple priest Shree Katenbhai Jani recited auspicious Vedic […]

END_OF_DOCUMENT_TOKEN_TO_BE_REPLACED 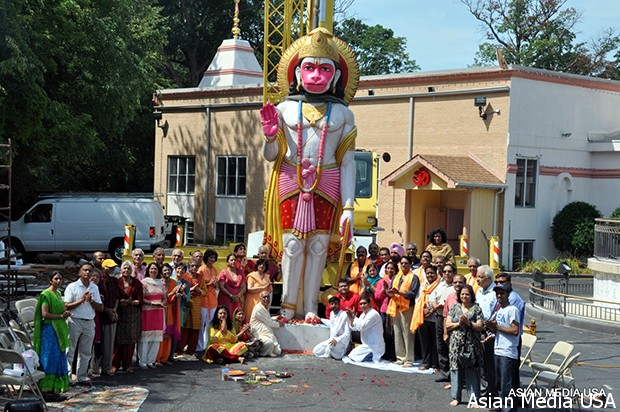 Chicago IL: Hari Om Mandir headed by Ayodhia Salwan, Chairman along with Board of trustees, Executive board members and other senior members, celebrated the Sthapna of Vishal 20 feet one piece white makrana stone Hanuman ji Murti (tallest in the world) with great fervor and gaiety on Tuesday, August, 27th 2013. Everyone was waiting to witness the historic moment in their memories. Our installation experts started their job and with due respect started lifting Shiromani Bhagat Shri Hanuman Ji from laying position to standing position. While Chanting Hnuman chalissa continuously finally Shiromani Bhagat Shri Hanuman Ji was up and standing on the kesari aasan laid on the ground for Puja and Havan. Our very learned Shastri Yogesh Pandya and Pt. Dinesh kumar did the puja and havan with great devotion. Everyone was overjoyed to see Shiromani Bhagat Shri Hanuman Ji sakshat in front. Puja was followed with the speeches. Chairman Ayodhia Salwan was very excited to explain the journey of Hanuman ji from start of the project till date. He felt pride on the whole Hari Om Parivar and its togetherness, with the result of which we were witnessing the moment. He introduced and welcomed the chief guest of the […]