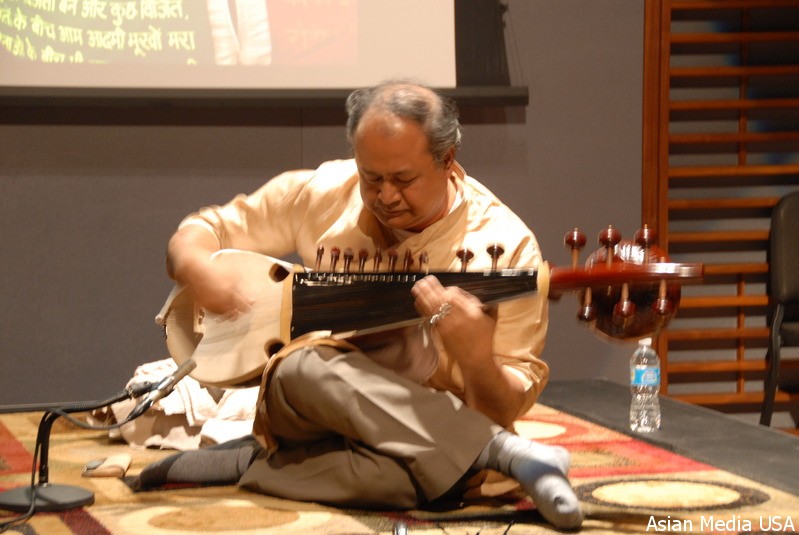 Chicago IL: “Performing the Bengal Borderlands: Music, Movement and Encounter” (Feb. 11–16) series at the University of Chicago (UC) was launched with a concert titled “Hindustani Strings at the Borderlands” at 7:30 pm on Feb 11, 2013 at the Reva and David Logan Center for the Arts. It featured separate performances by Amie Maciszewski (Austin, Texas) on the sitar and Somjit Dasgupta (Kolkata, India) on the sarod. They were accompanied by Manpreet Bedi on the tabla. The weeklong series of events is hosted by UC’s South Asian Sound Interventions Series (SASI). Assistant Professor of Music and the Humanities, Kaley Mason introduced Maciszewski and Bedi. The former, a student of sarod maestro Aashish Khan and Hindustani vocal diva Girija Devi, is a sitarist, teaching artist, ethnomusicologist, and documentary filmmaker. She played short pieces in different genres popular across the Bengal region, starting with raga Jhinjhoti popular as a folk variant (jhinjhit) among the Baul musicians. This was followed by raga Saraswati, in acknowledgement of the seasonal worship of the goddess of learning, the arts, and music, just commencing in India. She concluded with a Bengali boatman song. Bedi, a local Chicago artist, is a disciple of Suresh Talwalkar and Ramdas Palsule. […]