Subject: Dandiya Dhamal 2012 Event: Dandiya Dhamal 2012 Date: 7:30 PM – Saturday, October 6th 2012 Venue: Renaissance Convention Center, 1551 N. Thoreau Dr. Schaumburg, IL For details click on flier Disclaimer: – Asian Media USA The material attached to this E-flyer is an advertising material received from promoter. Readers are requested to make appropriate inquiries and take appropriate advice before acting on the attached material. Asian Media USA shall not be liable to any person for loss or damage incurred or suffered as a result of his / her accepting or offering to accept an invitation contained in any advertisement published in this email. “The information in this e-mail and any attachments is confidential and may be legally privileged. It is intended solely for the addressee or addressees. If you are not an intended recipient, please delete the message and any attachments and notify the sender of miss-delivery. Any use or disclosure of the contents of either is unauthorized and may be unlawful. All liability for viruses is excluded to the fullest extent permitted by law. Any views expressed in this message are those of the individual sender, except where the sender states them, with requisite authority, to be […]

END_OF_DOCUMENT_TOKEN_TO_BE_REPLACED 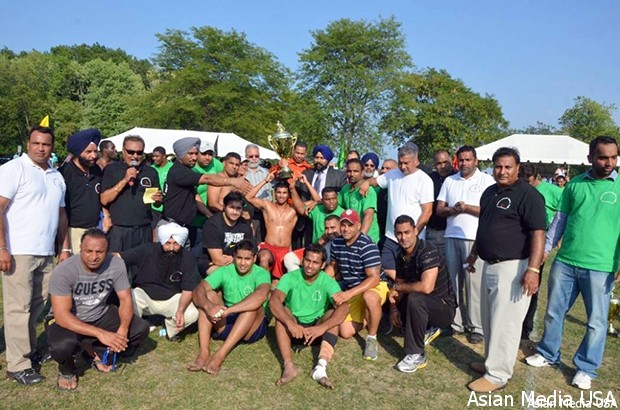 Chicago IL: On Sunday, September 02, 2012, the Sher-e-Punjab Sports and Cultural Club held its Annual International Kabaddi Cup and Volleyball Tournament at Busse Woods Forest Preserve, Elk Grove Village, IL. This sport event turned out to be a big festival of fun, food, live entertainment and sports. Despite uncertain weather in the morning people not only from Chicagoland’s area but from Indiana, Michigan and Wisconsin came in large numbers to enjoy this sports plus festival. In the evening a famous Punjabi folk singer Baljit Malwa from New York entertained the audience with his popular songs for more than one and a half hour. Chief guest was S. Ajit (Jay) Singh Walia of Wisconsin and Guest of Honor was S. Jasbir Singh Depty from Indianapolis IN. In the open highly physical and competitive Kabaddi Cup matches the first prize was won by the host Shere Punjab Sports & Cultural club, Chicago team by defeating Kings Sports Club Sacramento (California) team with 33 ½ points against 30. The first prize of was sponsored by S. Jaswinder Gill brother and S. Nazar Singh Gill of Waukegan, Illinois. The second prize did go to runner-up team of Kings Sports Club, Sacramento. The second […]