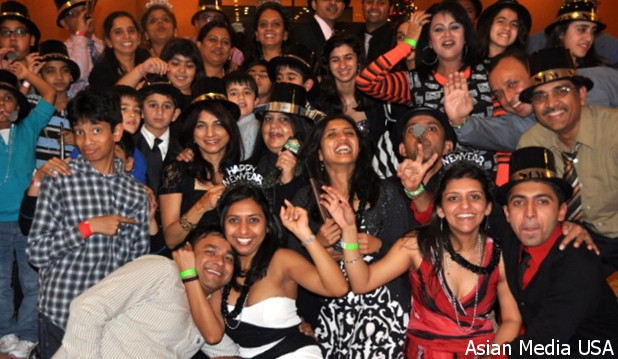 The event had fibulas Las Vegas theme which generated a lot ecstasy in the audience. Las Vegas party themes are very popular for all types of events — weddings, birthdays, rehearsal dinners, proms, bridal showers, charity events and more. Party theme ideas, like Las Vegas, transport guests to make-believe world for the evening. All the gambling machines was rented by Jokers Wild Entertainment Casino Rentals. Blackjack, Craps, Texas hold’em, Roulette, Poker Tables and Slot machine were in lobby of Waterford park. Person dressed up like Elvis Presley and 2 Sexy, Tall and pretty Go-Go dancers make guest believe that they are in Las Vegas.

The party had the best of music, entertainment, food and beverages. There was open bar from the beginning to end of the party serving premium liquors and cocktails. There cannot be a good India type festivity without excellent food. For that over 300 feet Buffet was provided by India house. This included 10 appetizers and more than 60 different mouth watering international items followed by verity of deserts including attractively arranged fruits. The International varieties tables included Punjabi, Chinese, Rajwadi Gujrati, Khaman Dhokla, Royal Darbar and Fusion India dishes along with fountain of Mango and Chikoo Lassi. Midnight champagne toast, which attracted guests from all over the Chicago to enjoy this one of a kind show in Chicago to ring in 2012.

Dedicated hard work from Waterford staff members went in to make this party full of Joy, “Maza and Masti” and overall family friendly for all age groups. Principal organizers of the event including Pritesh Gandhi, had worked hard to organize the party. “The food and service were indeed of very high quality. We always love to come to the Waterford park as the events here has lots of verity. We really enjoyed blackjack, craps and slot machine” exclaimed an ecstatic by Dr. Amrit Patel.

The dance floor was filled with enthusiasts and jubilations and the joy was felt by everyone present.
The countdown to the New Year was led by DJ Nilesh Desai Jockey and his group followed by the mid-night toast. Clatter from Party flavors and colorful Balloon drops along with Champaign toast filled the hall. All the folks present at the event greeted each other and the party ended at about 2am on January 1st, 2012. This event was a grand success despite competition by numerous other parties organized at the same time at different community halls, private houses, restaurants and banquet halls. The event elicited an outpouring of appreciation from the attendees. Weather in Chicago was extremely good comparison to last ten years (45 Fº) This event was a grand success to Pritesh Gandhi.

About Dana Daniels Go-Go dancer
As a model, Dana Daniels has graced both the runway and appeared in print ads. She is an accomplished spokes model and narrator with many repeat clients as well as major tradeshows under her “proverbial” belt. In addition to being a “Pirelli Girl” for Pirelli tires, Dana has represented many automotive clients as a product specialist, which includes Bucik, Cadillac, Chevy, GMAC, Toyota, and has toured with Lincoln featuring O.C.C. . Dana is an experienced tour guide, crowd gatherer, emcee, lead generator and is proficient with both ear-prompter and demonstrations. Dana has appeared in department stores and at corporate events as an informal model, freeze model ,and showgirl. She has also been booked as a Dita Von Teese look-a-like/spokesmodel for Cointreau. Dana’s outgoing personality, drive, work ethic, and interest in people from all facets of society and backgrounds

make her a marketable talent and explained by such a diverse range of clients in a wide variety of bookings. Dana is a consummate professional. Client lists and letters of recommendation are available upon request.
Actors Access:http://resumes.actorsaccess.com/danadaniels
Dana Daniels dana.daniels2@gmail.com 630-730-2369