Elgin, IL : Pongal festival – falls on the first day of the Thai month in Tamil Calendar – is not only the New Year for the Tamil community, but also marks the Harvesting Day in Tamil Nadu. Pongal festival is much more than a ritualistic celebration and open to everyone with no barriers of religion and creed. Representing the Tamil community, Chicago Tamil Sangam (CTS) hosted its Pongal Vizha “Festival of harvest” celebrations showcasing its affinity towards rich Tamil culture, on January 31, 2015, at Hemmens Cultural Center, Elgin, IL. The event saw an attendance of over 500, despite the inclined weather and the blizzard conditions following.

CTS, as never minimized its efforts, presented an event that provoked inquisitiveness among their patrons. The 5-hour long entertainment commenced sharp at 6:00 p.m. following Thamizh Thaai Vazhthu (Invocation to Goddess Tamil). President Mr. Somu Thiru inaugurated the event by introducing organizers Mrs. Lakshmi Anandan and Kamala Babu, who then chivalrously welcomed the patrons and the special guest Mr. Dindigul I. Leoni, a teacher, orator, and comedy debates judge speaker. Kavithai (poem) renditions by Mrs. Devi Annamalai and Mr. Sivakumar Murugesan signified the presence of Tamil Thaai (Goddess Tamil) in house. Then followed the stunning presentations by the beautiful women and the charming men of Chicagoland area displaying the rich performing arts: traditional, contemporary, classical and folk. The variety transported the audience to the streets and lush fields of Tamil Nadu, from foot tapping to soulful strains of Tamil songs. The whole program was emceed prudently by the most talented members Mrs. Manimekalai Praveen, Mrs. Rukmani Sivakumar, and Mr. Surendar Babu. 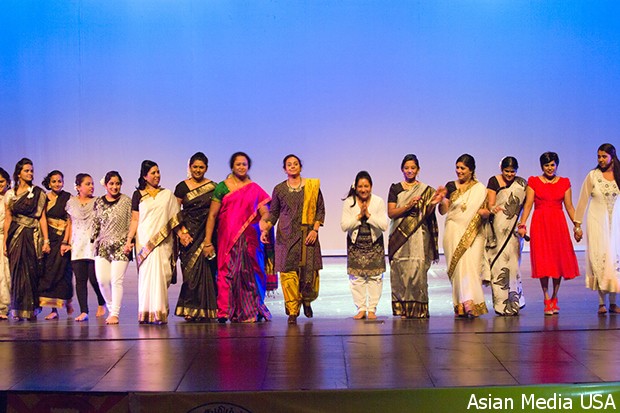 A folk dance presentation by Anu, Geetha Jagdeesh, Karthiga Kumaravel, and Lavanya Mohan was a real impetus to the group. Their dance moves and innate expressions impelled the chattering patrons to settle seated. A semi-classical dance performances by the talented teens; Rithika, Megha, Madhu, Nishitha, Nila and Shruthi was a real ecstasy to the audience, which laid them back on their seats with added enthusiasm. Followed by that, an assembly of five beautiful ladies (Aarthi Ramesh, Suseela Rajesh, AkhilaDarmela, NirmalaPandidurai, and Vinodani Vijayaboopathy), presented a medley dance performance which enticed the audience. The performer’s elegant footwork, fluid movements, and facial expressions beautifully in sync with the melody of the song, making the dance seem almost effortless.

Between colorful dances came “Silambattam” by children from “American Parai Team”, St. Louis was an energetic piece sparking off the entertainment. It was a great visual treat and astonished both the adults and children. Followed that was an invigorating presentation by the team “Chicago Sooravaligal” (Lakshmi & Manikandan, SriVidhya & Ranganathan, Deepa & Sriram, Jayshri & Ramesh) which took everyone down the memory lane of Tamil songs from the years 80’s and 90’s. The transition among the eminent collections of the great duets treated the audience, opulently. This performance truly got an encore due to popular demand. 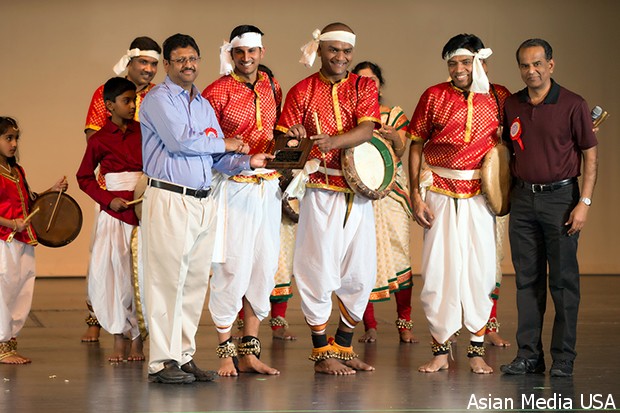 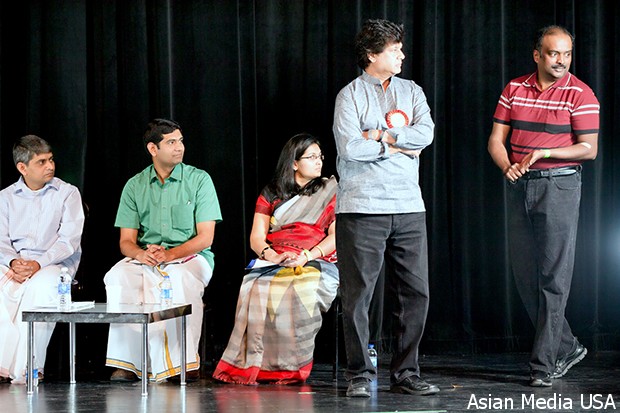 The list of performances came to an end with “Paraiyattam” (an authentic dance form of Tamil Nadu) and “Kummiyattam” by “American Parai Team” from St. Louis led by Mr. Porchezhian. This presentation was a side-splitting, which by itself was enough to retain the crowd till the end of the performances. Mr. N. Chandrakumar, Mr. Seeni Guruswamy, and Mr. Anand S. Anandan honored the performers. 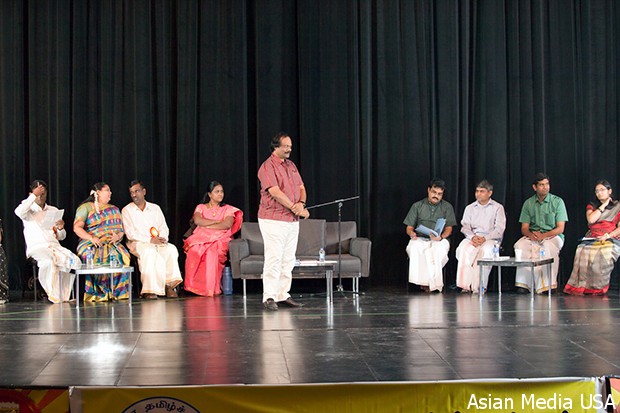 Factors crucial to the success of the program were favorable; generous donations from sponsors, logistical support from volunteers in setting up the event and in ferrying heavy food items, presence of talented artists, and an appreciative audience despite the perilous driving in the blizzard weather.