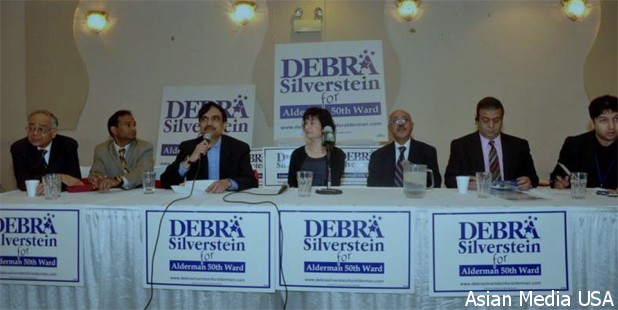 Bolstered by a legion of towering endorsements, Debra Silverstein – a candidate for 50th ward Alderman in the City of Chicago – received another string of South Asian community’s grass-root endorsements at a press conference held on Thursday, March 24, 2011 at Punjabi Dhaba Banquet Hall on Devon Ave in Chicago.

Debra Silverstein’s candidacy has been gaining momentum with a string of high level endorsements coming from Mayor-Elect Rahm Emanuel, US Congresswoman Jan Schakowsky, Cook County Sherriff Tom Dart and Indo American Democratic Organization. With the rendering of South Asian community endorsements, the Aldermanic candidacy of Debra Silverstein certainly gets a considerable boost as she faces the run-off election on Tuesday, April, 5, 2011.

The press conference gained an added prominence when ranking member of the United States Congress Hon. Jan Schakowsky joined the press conference and passionately declared “I am proud to endorse Debra for Alderman of the 50th ward. With her enthusiastic endorsement, Congresswoman Jan Schakowsky said Debra Silverstein will make an outstanding Alderwoman who will bring a real change and offer solutions to the enduring problems faced by the ward. Congresswoman Schakowsky said Debra Silverstein truly has what it takes to be the best candidate who will lead and act on issues affecting the community and ward. She reminded that the business-district stretch on Devon Avenue is like the ‘diamond in the rough’ ready to be shining again with Debra’s leadership.

Addressing the well represented media conference, Aldermanic candidate Debra Silverstein thanked the Indian and Pakistani community and specially thanked Congresswoman Jan Schakowsky for her enthusiastic and important endorsement. Debra Silverstein addressed a wide range of issues that are central to the 50th ward including reinvigorating Devon Avenue business district that houses several blocks of Indo Pakistani retail outlets. Debra Silverstein pledged to ‘hit the ground running’ to accomplish many important goals and milestones including fixing the potholes, repaving streets, infrastructural upgrades and, more importantly, to significantly improve constituent services by instituting an ‘open door’ policy for the communities to meet her for any issue or problem. Debra Silverstein decried the parking meters lease that continues to hurt businesses on Devon Ave.and pledged to address the perennial parking problems.

Debra Silverstein said she would maintain a transparent and accountable aldermanic office and have the TIF funds information open to the ward residents.

The line-up of endorsements commenced with Harendra Mangrola, newly elected president of Indo American Democratic Organization who reiterated IADO’s commitment to endorse Debra Silverstein for her vision and the level of energy and innovative ideas she brings to change the 50th ward.

Dr. Ram Gajjela, Executive Director of Indo American Democratic Organization explained that the 50th ward and the business communities need a jolt of governmental assistance as it faces a general decline. Dr. Ram Gajjela said Debra Silverstein’s candidacy provides tremendous hope under such conditions and pledged that he would join the team of volunteers to support in campaigning for every vote for Debra Silverstein in the ward. Pan-Asian community activist Sadru Noorani in endorsing Debra Silverstein added that the business communities and real estate market in the ward is suffering immensely and he urged for a stepped up economic assistance to lift up the sagging entrepreneurship on Devon Avenue.

Dr. Mujahid Ghazi, a renowned Pakistani community activist and radio talk show host forcefully said it is time for all of us to come out and take a decisively unequivocal stand to support Debra Silverstein as our next alderman.

Jamshaid Nasim from Pakistani community gave a ringing endorsement for Debra Silverstein and focused on the initiation of programs by Debra for the neighborhoods and communities that caused an improvement in the quality of life of the 50th ward.

Dr. Ashish Sen showcasing his support for Debra said he has already voted and he is confident that the new wave of ‘change’ will certainly bring the much needed change in the 50th ward leadership on April 5th. Some of the prominent community leaders present include Balwinder Singh and Sher Mohammed Rajput and the press conference was hosted with the assistance of Syed Rahim and Syed Sabahat Jamal.