Glenview, IL: It will be a dream come true for many devotees of Hanumanji in Glenview and surrounding suburbs of Chicagoland with Hanuman Mandir Spiritual and Community Center formally conducting a Bhumi Pooja for establishing a Hanuman Temple along with a facility for community and spiritual activities for people of all ages.

The Center headed by Dr. Chandra Khurana and a group of Indian Americans diligently searched the north side of Chicago for a site to build the temple and community center and finally found a 4.1-acre land in Glenview where they decided to construct a 37,200 square-foot, two story building at 3623 West Lake Avenue, Glenview, IL. The plan has received the blessings of the Village trustees.

The memorable moment marked the beginning of a realization of a noble and long cherished dream of the Indian community residing in the northern suburbs of Chicago. In view of the growing number of the Indian population and their spiritual needs, it was long felt to have a facility that could serve as the source to provide support for the fast aging people. This project will include a Hanuman Mandir and a community center. This will serve the long standing desire of the community to have a multi-faceted public place to celebrate various cultural, spiritual and educational programs. The Center will benefit the members of all the communities and will offer a very broad-based opportunity for social interaction. 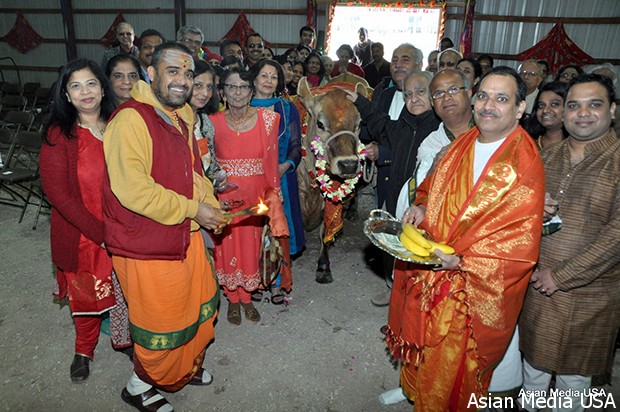 The Village of Glenview has granted the approval for the construction of this holy project which is expected to be completed in about a year. The Mandir would have two distinct areas, which are, performance of spiritual activities; and organizing various cultural community programs.

The devotees of Hanuman Spiritual and Community Center, now popularly known as Hanuman Mandir of Greater Chicago, share the pleasure of announcing that a significant progress has been achieved towards the establishment of a Hanuman Mandir in Glenview. Various volunteer committees have been formed to undertake specialized roles. Furthermore, the task of carving idols is underway in India. The sculptors experienced in carving world-famous Makrana marble in Rajasthan are actively working to complete these holy artistic ventures in a timely manner. 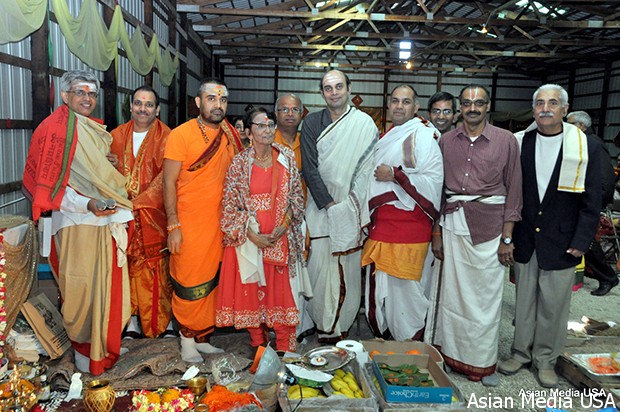 The happy date of April 26, 2014 marked the historic day for the Hanuman Mandir of Greater Chicago, Glenview, IL, as a large number of devotees thronged to participate in the much awaited holy ceremony of Bhoomi Poojan (ground-breaking) for the upcoming Mandir.

The auspicious ceremony start with live cow Pooja. The arrival of a healthy, live cow at 8 a.m. at the temple site sent a wave of surprise and spirituality among the present devotees. The cow (named Butter-cup by its owner) seemed to enjoy the attention and respect it received from the worshipping devotees. The priest Shri Nagendra Rao from Sri Bala Ji Mandir in Aurora, IL, performed the ‘Gau Pooja’ amidst the chanting of mantras and putting tilak on the forehead of cow. Many devotees take advantage of this spiritual ceremony. 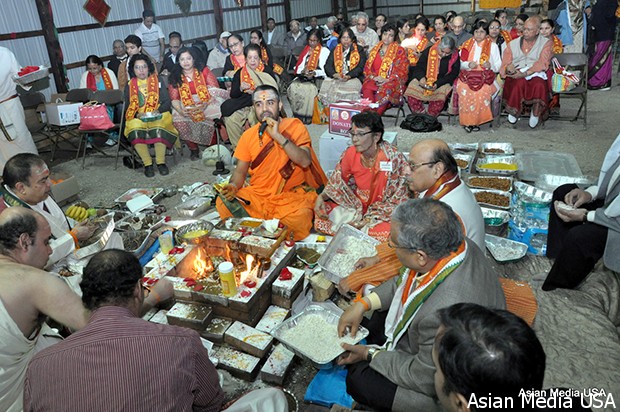 The prayers were continued to the ‘Hawan Sthan (place of hawan’ inside the existing old building structure) for two hours. The Hawan fire was started by Dr. Chandra Khurana, She was accompanied by many senior members of the Indian community namely; Dr. Hemlata Rana, Dr. Devang Thakkar & Roopal Thakkar, Mr. Moti Agarwal Chairman of Millennium Bank and the President of United Senior Parivaar, Ramanbhai Patel. Meanwhile the Hawan Smagri was distributed among over 700 present devotees to enable them to offer their ‘ahutis’ (offering to the holy fire) from their respective places.

The constant chanting of mantras with the devotional voices of hundreds of devotees filled the atmosphere with indescribable and mesmerizing effect. A group of devotees dedicatedly sang the Bhajans highlighting the divinity of Hanuman Ji. The event announcements were managed by Satish Chander who kept the audience motivated to frequently chant the holy words of ‘Hanuman Ji Maharaj ki Jai’. 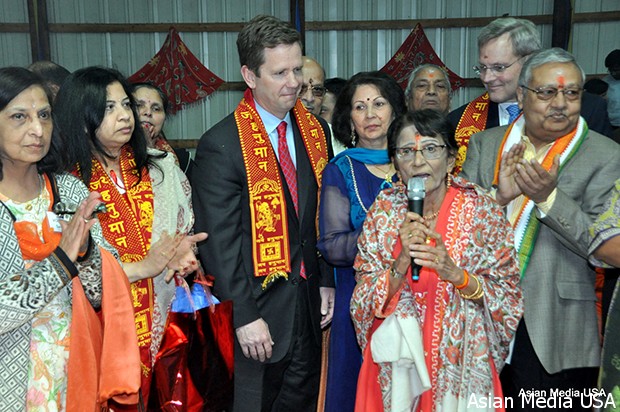 All the devotee families were offered a steel plate and a red holy scarf as a gift to mark the occasion. At the end of the ceremony everybody received fresh and dry fruit prasad and a packed food box. The food boxes were donated by Viceroy of India and sweet ladoos were donated by Punjab Sweets. The ceremony was accomplished on time at 12:30 p.m.

The organizers and devotees of Hanuman Mandir are looking forward for blessings from Hanumanji for the timely completion of this holy project.

During this past period, there was an outpouring of support from devotees of North side and Chicago areas that includes, among others, businesses like Viceroy of India, Punjab Sweets, and Raj Jeweler