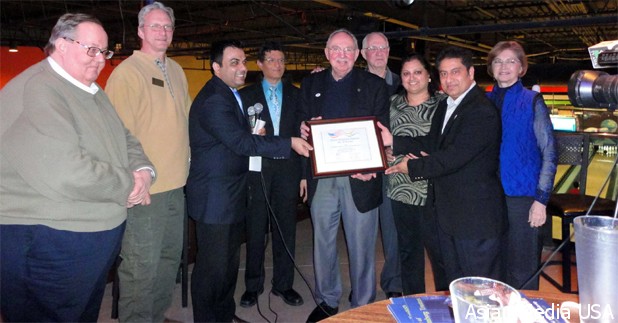 After the socializing hour from 6 to 8 pm, the fund-raising function started with Neil Khot extending a warm welcome to the distinguished guests and thanking them for their valuable participation to support the incumbent Mayor, Al Larsen, who had served them well during his tenure. Especially, he thanked Dhitu Bhagwakar and Strike Ten for allowing hosting this event. Lavishing praise on the Indian community he said that they are no longer a standby community but more involved in the civic affairs than ever before. He stated that about 17% or 13,000 of Schaumburg resident are Indians. Amid applause he recognized and thanked the Mayor of Village of Schaumburg for administering the city with dedication and efficiency. Alluding to the declaration of January 20th as the “Federation of Indian Associations Day”, by the Mayor he said the entire community is grateful to the gesture of the Mayor and reaffirm their support in his bid to seek reelection.

In his brief remarks Dhitu Bhagwakar thanked the Mayor for doing a wonderful job for the village of Schaumburg and emphasized that he was glad to host the fundraiser.

Swapnil Shah Son of Sunil Shah, the newly elected President of FIA (Chicago) read out the message from Sunil Shah extending his support to the Mayor and the Village Trustee. Naren Patel a leading Indian political advocate in his brief address recognized the great work Mayor Larsen had rendered to the citizens of the village and requested the Indian community to come together and go out and vote for him.

Hina Trivedi asked Al Larson a few questions about what he would do for the Indian Community if he gets reelected. Al Larson answered saying that he would appoint an Indian Physician from Schaumburg on his Healthcare Board. Also he hoped to see lot of participation from the Indian Community at the Village committees. Further, Larson said that he was glad to be at Strike Ten and was Thankful for the Indian community for hosting this event. Trustees Mark Madej, Frank Kozak, current Village Trustee, Hank Curcio and George Dunham also pitched in urging to support the incumbent Mayor.

All the community leaders came together on-stage and handed the Endorsement Certificate from the Community to Honorable Mayor, Al Larson along with the proceeds of the collections. Neil Khot, in conclusion thanked everyone for attending the fundraiser, especially his Wife Annu Khot for her support and organizing the event.