It was 20th anniversary of PCS Chicago’s incorporation and 30th year of the event “Rangla Punjab.” Dr. Bhupinder Singh Saini of Advanced Pain Management Clinics in Wisconsin was the chief guest. State of Illinois Governor Pat Quinn proclaimed April 19, 2014 as Punjabi Cultural Society of Chicago Day in Illinois. The proclamation was read and presented to the PCS President Pardeep Singh Deol and PCS Chairman Dr. Hargurmukhpal Singh by Ms. Theresa Mah, Senior Public Advisor and Director of Asian American outreach to the office of Governor. The proclamation honored PCS Chicago for its 20th anniversary celebrations and marking the 30th anniversary of “Rangla Punjab” event. 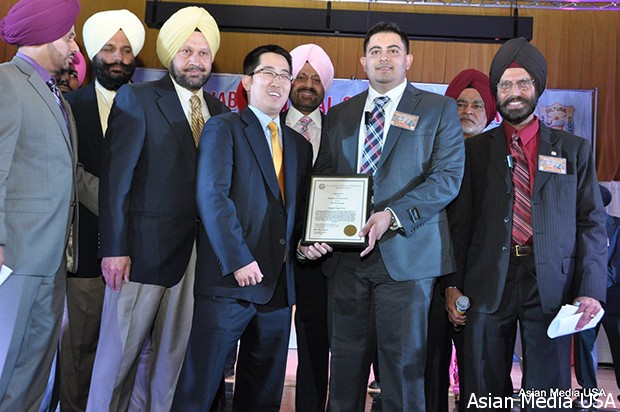 The program divided in four segments included dazzling and spectacular performances of Bhangra and Gidha dances, delightful Punjabi songs, and music, by local and guest artists from Illinois, Wisconsin and Indiana.
Enthusiastic artists of all ages, talented teenage young boys and girls, college students, and exceptionally entertaining adult artists in a variety of colorful costumes from Illinois, Indiana, and Wisconsin performed their best on stage. Young children were trained by PCS who were practicing since January for this event. 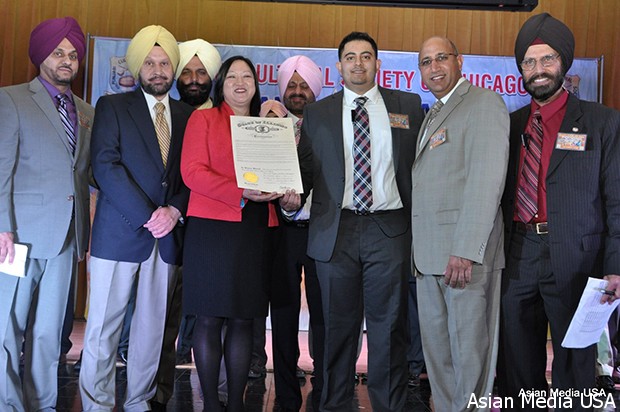 The Gidha dance moves by the colorfully dressed ladies from “Milwaukee Gidha” Team and “Chicago Gidhe Diyan Ranian,” the young “Chicago Gidha” team, and “Shaunkanna Chicago Diyan” were nostalgic reminders of rural Punjab and won the hearts of the audience with their stellar acts. 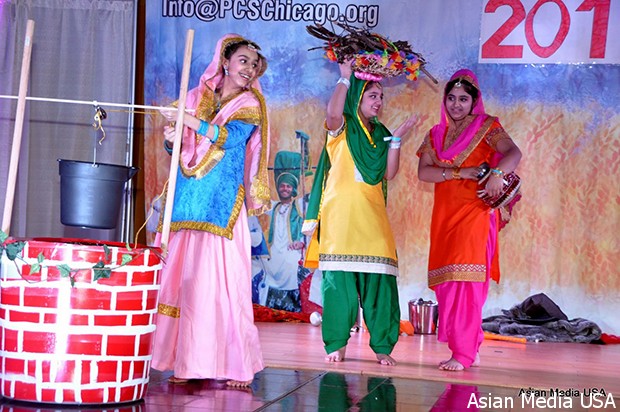 There were many other excellent Bhangra, Gidha, and dance items presented by the local community children and artists. It was really a festival of Punjabi culture and a delightful treat.

Several vendors had setup shop to sell novelty merchandise in the Club’s lobby. Posters of Sikh soldiers in World Wars I and II were also displayed in the lobby.

“A fast moving five hour long program with participants ranging from five to fifty in age was incredible, one of the best I have ever seen in community programs. My eyes were glued on stage and everyone around me loved it,” said Amrit Mittal of Western Springs IL who came with his family. 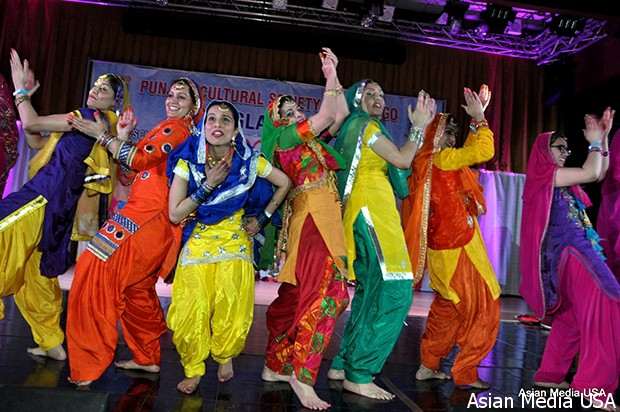 Pardeep Singh Deol is the first Punjabi American born and brought up in the U.S. to become the president of P.C.S. Chicago. The intent is to mentor and get the next generation involved in the management of the organization.

Rajinder Singh Mago was introduced on the stage as the co-founder of the 20 years old Punjabi Cultural Society of Chicago and the one who initially gave the name “Rangla Punjab” to this 30 year old Punjabi cultural event in Chicago.

Mago conducted the awards and recognition ceremonies in cooperation with Sunny Kular. Outgoing PCS president Surinder Singh Sangha was awarded a plaque for his excellent services during his term. Surinder Sangha thanked his team for their full support through the past year. Outgoing PCS Chairman Lakhvir Singh Sahota was similarly honored. Sahota praised the good works of PCS Chicago.

“I appreciate the wonderful work that PCS and its dedicated board members are doing,” said Dr. Saini, and urged the community to support PCS activities to keep our culture alive.

Dr. Hargurmukhpal Singh said that he has been attached with PCS ever since his own children were growing up here and PCS has been instrumental in imparting Punjabi culture to community’s next generation including his children.

PCS President Pardeep Singh Deol thanked the participants, coordinators, sponsors and the community members for their support, and also recognized in the audience. The Sikh Religious Society Palatine President Sokhi Singh made an appearance and conveyed the Vaisakhi greetings to the audience and congratulated PCS for the valuable community service it is doing.

The VIP delicious dinner and participants refreshments were prepared by Meadows Club.
Punjabi Cultural Society of Chicago (PCS) was incorporated two decades ago, and this traditional annual Punjabi cultural program “Rangla Punjab” has been running for three decades. This is the single largest annual Punjabi cultural event in Chicago area that show cases the Punjabi performing arts and promotes the local community talent. Its purpose is to impart Punjabi cultural values to our next generation born and brought up here in America and also to share it with the American mainstream. It is also to unite and build the community living here through a common cultural bond and such celebrations. 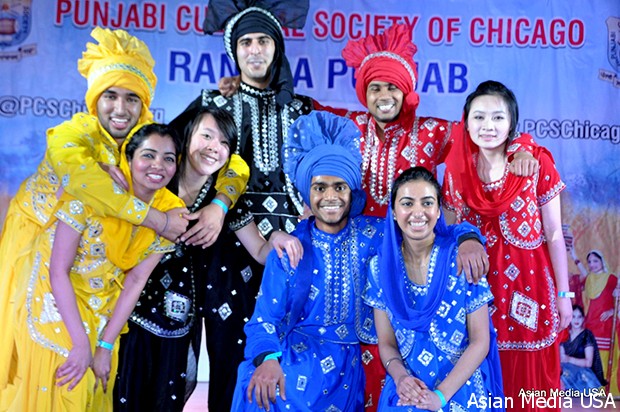 About Vaisakhi:
Vaisakhi is a very popular cultural festival in Punjab India. It is a harvest and spring festival, a new year, and signifies renewal and rejuvenation.
““Vaisakhi has a special significance for the Sikhs, actually it should be for everyone. On this day in 1699 the tenth Sikh Guru, Guru Gobind “Rai” became Gobind “Singh” and ordained the egalitarian order of Khalsa, said Rajinder Singh Mago, “This was an amazing act of unifying humanity by rejecting the caste system prevalent in India. Guru Gobind took five devotees, one Daya Ram of Khatri caste from Lahore Punjab, second Dharam Das a Jaat (farmer) from Hastina Pur U.P., third Himmat Rai a water bearer (Kumhar) from Jaganath Puri Odissa, fourth Mohkam Chand a tailor/calico printer (Chhimba) from Dwarka Gujrat, and fifth Sahib Chand a barber from Bidar Karnatka, and initiated them with Amrit Ceremony. Guru asked them to drop their cast affiliated last names, and all to drink Amrit (immortalizing nectar) out of the same bowl like a family, and become one human race where all males will have their last name as “Singh” and all females “Kaur.” Thus he empowered those down trodden people in servitude to be equal to higher castes. Then he asked these “Panj Piyare” (five beloved ones) to initiate him with the same Amrit ceremony that he initiated them with, to remove any barriers between the Guru and the followers. So the first five Khalsas were not all Punjabis, they belonged to five different states of the country, and were people born in five different Hindu castes, including three from “Shudra” lower castes. This was way above national integration, this was integration of humanity,”” Mago added.