Chicago IL: International Women’s Day celebrations were organized by TAGC & ATA on March 15th 2014 at the Holiday Inn Hotel & Suites, Carol Stream, IL. TAGC is a non-profit organization devoted to the awareness and promotion of Telugu Heritage and Culture in the mid-west region headquartered in Chicago. The Association was originally founded in 1971 and incorporated as a non-profit organization by the year 1978. What was once a brain child of small group of individuals, TAGC has grown to be one of the oldest and largest Indo-American organizations in the United States.

ATA (American Telugu Association) is a non-profit national organization and was founded in 1990, head quartered in Chicago. The main purpose of the organization is to assist and promote literary, cultural, educational, religious, social, economic, health and community activities of the people of Telugu origin as well as to promote exchange programs for students, scientists, and professionals of Telugu origin between the
United States of America, Canada and India and other countries. 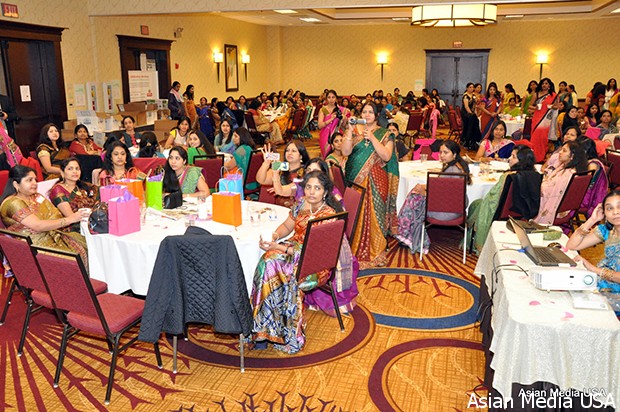 Over 250 women of Telugu origin participated in this unique event which raised awareness about important issues such as Women’s Mental Health, Nutrition and Diet, Indian Women in American Politics, STEM Education and Women’s Fashion. A food drive was successfully conducted as a part of this event.

The program started with a couple of team building activities to acquaint participants with each other and they worked on fun projects together.

The official opening began with traditional lamp lighting, which was followed by an invocation song performed by TAGC members. This was followed by welcome address given by Mr. Srinivas Pedamallu, the President of TAGC. The MC’s of the program were Ms. Kiran Mattey and Dr. Bhargavi Nettem. This year’s theme- “Inspiring Change” and its significance was explained by Ms. Nandini Kondapalli. 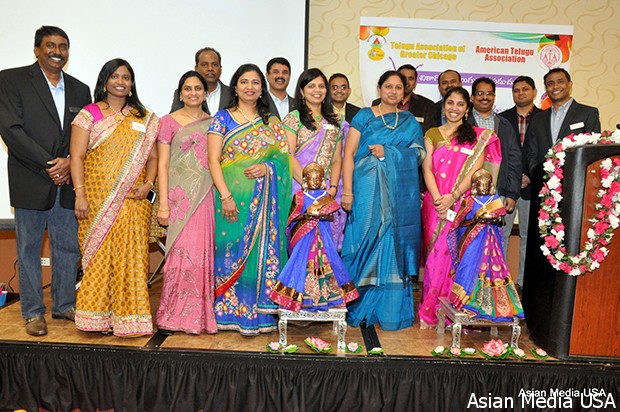 This was followed by 5 workshops presented by a panel of experts from various fields. Ms. Manju Goel , Candidate for US Congress spoke about Indian Women in American Politics. Dr. Bharathi Marri M.D. presented a workshop on mental health issues which are very important indicators of our health and wellness. A STEM education workshop was presented by Dr. Suma Rajashanker, Professor at NIU who spoke about the current emphasis on Science and Technology education to fill the fast-growing and highest-wage jobs in the future. “Eat Healthy and Live Wealthy” was presented by Ms. Deepali Aul, Nutritionist and Founder of HF Chef. She spoke about the dangers of eating processed food and high fructose products. Her seminar gave useful health and diet tips to the audience. The last workshop was presented by Ms. Nupur Sharma, who teaches at the Illinois Institute of Art in Schaumburg. She spoke about dressing for success and fashion mistakes to avoid. 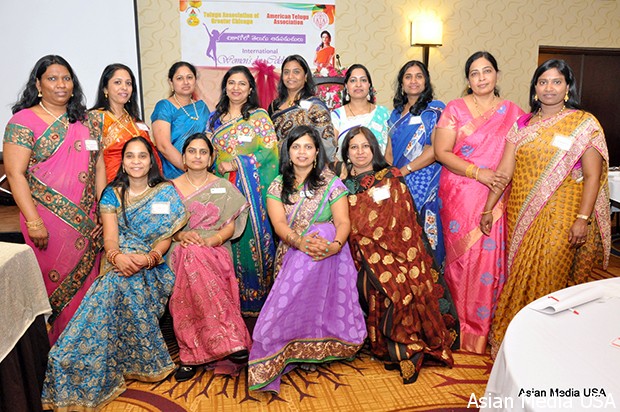 All workshops were well received and provided the audience opportunity to exchange ideas and ask questions.

The food drive for charity initiated by Padma Madireddy, collected about 18 boxes of food which were donated to Chicago Food Depository.

Women enjoyed dinner and socialized causally. The evening ended with dancing, as the DJ played popular soundtracks which brought all the women to the dance floor.