Chicago IL: University of Chicago (UC) held a public program on Sunday afternoon, October 6, 2013 at the UC Rockefeller Memorial Chapel (RMC) to announce the first two recipients of the Swami Vivekananda Chair, funded to the tune $1.5M by the Indian Ministry of Culture. Addressed by swamis from the Vivekananda Vedanta Society of Chicago (VSC) and two UC professors, the event also amounted to an endorsement of the appointments by the large assembly of Hindus, who have been celebrating Vivekananda’s 150th Birth Anniversary throughout this year. Held in collaboration with UC Spiritual Life Office and support of the Committee on Southern Asian Studies, befitting music and song was provided by UC’s Sur Musafir, Bengali Association of Greater Chicago (BAGC), and the Unity in the Dunes Church Choir (UDCC).

Soon after SV’s famous “Sisters and Brothers of America” address at the Parliament of World Religions (PWR) in 1893, he had been invited to speak on “Modern Schools of Hinduism” at Cobb Hall, where the UC had begun classes after its inception in 1891. 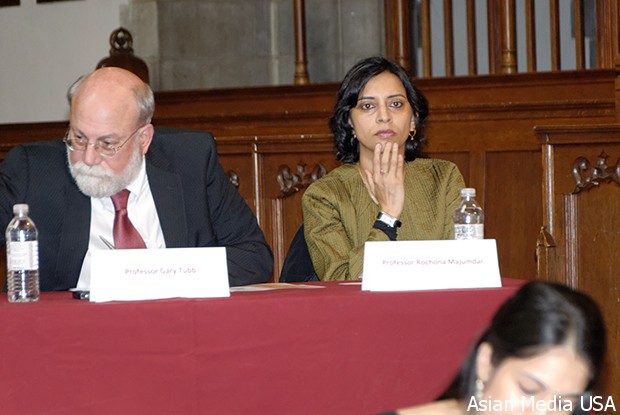 In her welcome address, RMC Dean Elizabeth Davenport underlined the Chapel’s role as spiritual and ceremonial center of UC and how befitting it was as venue for celebrating SVs message on harmony of all religions. She introduced Jighna Shah, as the Chapel’s first non-Christian Assistant Dean. The latter invited students from Chinmaya Mission to chant prayers for universal peace.

VSC Assistant Minister Swami Varadananda’s short keynote highlighted the historic significance of SVs speech to the Parliament of World Religions (PWR) for interfaith dialogue, introduction of Hinduism to the West, and uniting the respective strengths of East and West. UDCC then sang the hymns “Let There Peace on Earth” and “This is My Song.”

Prof. Rochona Majumdar spoke on SV’s “Empowerment of Women” especially by opposing child marriage and stressing the importance of education. She focused on Margaret Nobel, later christened “Sister Nivedita” (the dedicated one), who was won over by SV’s teaching and charisma. Devoted to the cause of Indian women, hers was a critical acceptance rather than blind faith in a guru. Suspected of being yet another missionary, Nivedita won over an assembly composed entirely of Indian men, to the delight of a beaming SV, who had done everything to facilitate her adaptation to her adopted motherland. Sharada Ma came to Kolkata disturbed by rumors of her husband Shree Ramakrishna’s lunacy but was convinced of his saintliness. Despite having no formal education, she too unequivocally condemned child marriage, did not dress as widow, and broke many taboos, such as receiving the “barbarian” (mleccha) Nivedita, feeding poor Muslims, and allowing “untouchables” to touch her. 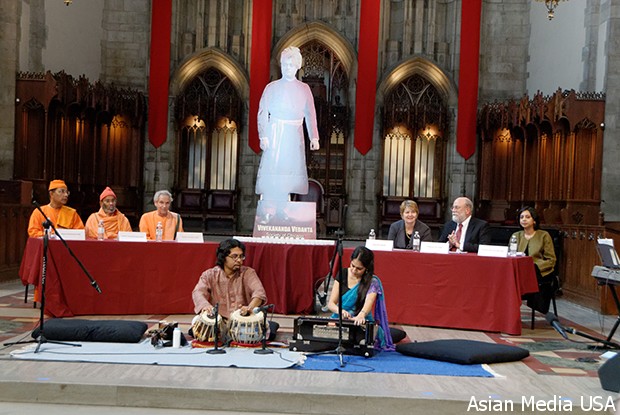 Speaking on “Unity in Diversity,” Swami Shantarupananda, Minister-in-Charge of the Vedanta Society of Portland, highlighted SV’s uniqueness recognized by Harvard professor William James and other interlocutors. SV proclaimed that he had given enough food (for thought) to the world for the next 1500 years. His core teaching was “Freedom that I will not christianize nor hinduize.” He quoted Mark Twain that America was blessed with three unspeakable things, “freedom of speech, conscience, and not to practice either.” The eight-minute standing ovation was to a complete stranger, who greeted them as ” my own, not strangers.” Diversity is the law of nature known to ancient India and Vedanta is to “know that by which everything is known.”
BAGC sang four Bengali songs, two celebrating SV’s achievements, including Sannyasi Sainik (“Soldier Renuncate”) on his taking Chicago by storm, and two addressed to Mother Kali.

Prof. Gary Tubb began by posing two objections (poorva-paksha) to SV’s project of “Uplifting the Masses”: 1) Vedanta should be taught only to pure brahmins according to Shankaracharya, and 2) SV’s own insistence that the material upliftment of Indians is more urgent than study of philosophy. SV did not consider Shankara’s strictures to be binding today and exhorted all Indians, especially Dalits, to study Sanskrit to re-appropriate their own traditions. Upon his return to India, he presented his real mission to the West as that of spreading Vedanta and the idea of oneness as the salvation of the masses. Having at first criticized the Buddha for resorting to the vernacular for immediate popular success, SV subsequently recognized the dilemma and wavered, declaring that “Shankara taught Vedanta from the head instead of from the heart like the Buddha.” Recalling SV’s critique of the failure of the Indian university system in his day, Tubb claimed that SV “would have welcomed current developments in American universities.”
This was the cue for Dean of Humanities Division Martha T. Roth to announce the two first recipients of UC Swami Vivekananda Chair, Sir Christopher Bayly (UK) and David Shulman (Israel), and recount their impressive achievements. Thanking the Indian Ministry of Culture, she stated that each would give a public lecture in collaboration with the Consul General of India in Chicago. Unmentioned at the event was what these eminent scholars had specifically contributed to our understanding of Vivekananda’s legacy and or perhaps subsequently at UC.

Speaking on “Vivekananda’s Contribution to Humanity,” Swami Ishatmananda, VSC Minister-in-Charge, recounted how SV had addressed Rockefeller on his past without even looking up when barged upon at the home of the latter’s friend. Rockefeller came back with a check two weeks later expecting thanks. “It is you should thank me,” SV retorted, whose mission was to transform human psychology, to teach people their divinity and how to manifest it. SV likewise converted Indian billionaire Jamshedji Tata to charitable causes.
Sumit Sen proposed the vote of thanks.