Chicago IL: Many Hindu organizations joined hands on September 28, 2013 under the banner of the Vishwa Hindu Parishad of America (VHP-A) to celebrate Swami Vivekananda’s 150th Birth Anniversary at the Jain Mandir in Bartlett, Ill. All the speakers, including the eagerly awaited Baba Ramdev, eulogized Vivekananda’s mission, and insisted on the need to fulfill his vision in the light of contemporary challenges. Dignitaries and devotees alike had left early morning in buses to visit the Art Institute to pay obeisance to Swami Vivekananda’s plaque before listening to Baba Ramdev’s speech there. Jain Society President and committee members welcomed the Baba. 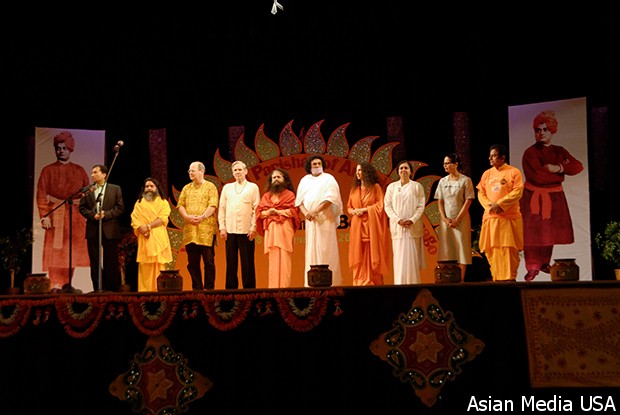 16-year old co-MC Nirav Virani recounted the origin of Vivekananda’s characteristic pose, arms folded across the chest, to his turning around abruptly to confront the pursuing monkeys at the Durga Mandir of Banaras. This posture of self-confidence in meeting all challenges that the Swami wanted to instill among Hindus was portrayed on the banners adorning the stage. Program began after 11 am with MC Anju Lal presenting in both English and Hindi.

Shree Narayan Chandok introduced VHP as existing in USA since 50 years. In addition to founding the Hindu Students Organization, VHP has pioneered the Hindu Mandir Executive Committee (HMEC) that now boasts over 110 temples. The priests meet in conferences so as to assume a counseling role beyond the mere performance of ritual. He invited the audience to join VHP’s efforts to bring good governance to India through non-partisan political advocacy.

Swami Dr. Ramkamal Das Vedanti of Banaras spoke in Hindi on Vivekananda’s message and mission. He condemned the divorce between words and deeds, with religious leaders speaking of dharma while bombs are exploding all over. He praised VHP’s efforts at bringing heads of all religious institutions together on the same platform and under the same umbrella.

Presented as prime mover behind the event, Vandana Jhingan introduced Swami Chidananda Saraswati Maharaj of Paramarth Niketan, who spoke of Vivekananda’s PWR speech and 911 as having changed the world. Hence, the “world without borders” theme is again vital today. “I should become We, and change must start from the heart, not from outside,” he declared.

Related to the Mahatma, Veena Gandhi of VHPA Governing Board declared Vivekananda to be “my idol right from childhood.” Her PowerPoint identified 3 contributions: unity-in-diversity of religions, we are all children of immortality, and practical Vedanta. 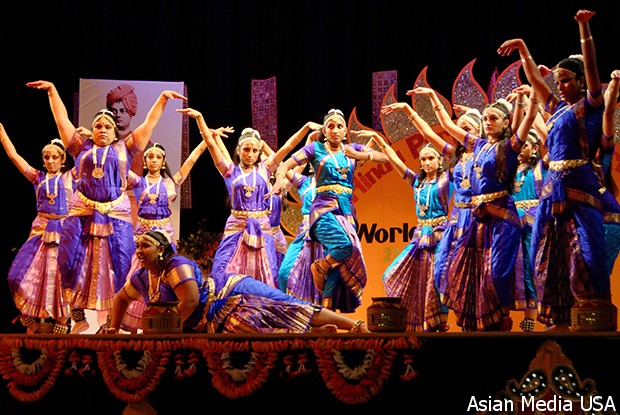 Armstrong spoke of nine qualities of Vivekananda that need to be implemented today by the Hindu diaspora, including discernment, contemporary relevance, being a teacher, technology, organic living, strategy, being liberated, unity, being an ambassador (like Hanuman), etc.

VHPA Joint General Secretary Sanjay Mehta introduced VHPA as inspired by the belief that “dharma protects when protected” (dharma rakshati rakshita) and “the whole world is our family” (vasudhaiva kutumbakam): “VHP’s goal is that of Vivekananda.”

Vemuri Subramaniam introduced Rajiv Malhotra as having retired early at age 44 to dedicate his wealth to championing Hindu causes through his Infinity Foundation. Malhotra explained that he is currently completing a book on Vivekananda to meet the challenges that have only increased in the meantime to the very foundations of Hinduism. He cautioned against the mantra of “sameness of all religions” in this battlefield (Kurukshetra) of globalization.

Prasad Yalamanchi praised Subramanian, for whom Vivekananda wanted to create a new defiant and self-assertive (virat) Hindu, the subject of his recent book. When Europe was suffering from internecine warfare, there was never a war between India and China, which was deeply influenced by Buddhism. He observed how ancient treasures like martial arts, yoga, and Sanskrit, have regained esteem among modern Indians only after their valorization abroad. Similarly, Vivekananda was recognized only after his resounding Chicago address. Current attempts to “secularize” the Swami contradict his writings. He flatly rejected the division between Aryans and Dravidians as falsely constructed by Orientalism and coopted by self-interested Indian politicians. Whereas Iran was converted to Islam within 15 years, India has remained 80% Hindu, which he attributed to heroes like Rana Pratap Singh and Jhansi Rani. “We’ll recognize Muslims and Christians when they accept that their forbears were of native Indian ancestry,” he added. “Everyone should study Sanskrit. Enemies are trying to divide us. This is the real way to honor and venerate Vivekananda.”

Brahmakumari Binny Saren, who did her PhD in spirituality from Gujarat University, spoke of her ten years of meditation at Mount Abu and of their 97-year old spiritual head Janaki as having the most stable mind through her meditation. Jain Acharya Dr. Lokesh Muniji, who emphasized character development in youth, spoke also of the Jain delegate to the PWR.

Bharat Barai introduced Mahesh Mehta, founder of VHPA. Transformed by his meeting with Golwalkar at age 10, his idea of founding VHPA was realized in 1971. Two of Vivekananda’s then unlikely predictionsindependence in 50 years and the next revolution happening among proletariat in Russia and China have already come true. The third was that India will be the world-teacher (jagad-guru) within 100 years.

Chandok introduced Ramdev as spreading yoga and Ayurveda across India and the world, and the only non-Muslim to have been invited to address and teach yoga at the Deoband conference of Islamic scholars. Declaring that real ‘humanism’ is to make a devotee a better representative of his or her received faith, his own yoga initiatives are not intended to convert. To the delight of many, he repeatedly broke off from Hindi into colloquial Gujarati. Corruption is far worse now than during the colonial exploitation of India, he affirmed. He saluted American enterprise for building the nation in less than 500 years, whereas India’s once global ancient culture has been fragmented. He also praised Sardar Vallabhai Patel for preserving India’s unity. “We are all children of immortality. Assume your svadharma.”

The program was interspersed with classical India group dances.