Chicago IL: Counsel General of India, Chicago on the auspicious occasion of the 67th Anniversary of the freedom Day of India invited Elite Group of people comprising of Govt. Officers, Air India, US and other countries Diplomats, Leading personalities of Indian Community of Chicago on Thursday, August 15,2013 at 10-00 am at the premises of the Consulate general of Chicago at NBC Tower Building,455.N. City front Plaza Drive Suite No. 850, Chicago IL 606111. Indians in Chicago celebrated the country’s 67th Independence Day by Flag-Hoisting and Grand Reception.

A large number of people gathered at the Indian Consulate General in downtown to join in the festivities as Consul General Ausuf Saeed unfurled the Tricolor amid cheers. This was followed by the singing of the Indian National Anthem and American National Anthem. Then the Consul General read President Pranab Mukherjee’s message to the Indians all over the world. There were many dignitaries present like Rishikant, Manager Air India, Naren Patel of MedStar Lab. Iftekhar Sharif, Hina Trivedi, etc. 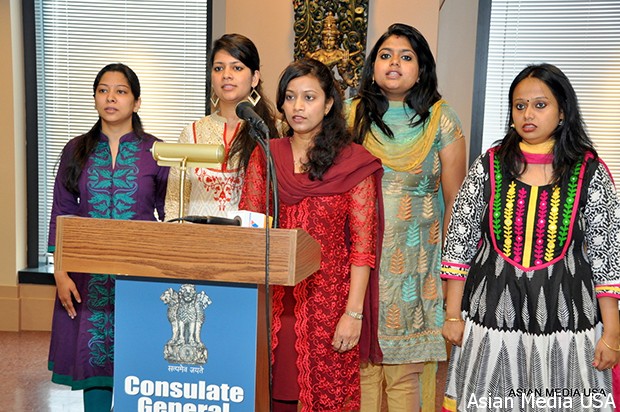 On the happy and momentous occasion of the 67th Independence Day of the Republic of India, let me take the pleasure of extending my warm greetings and best wishes to all Indian nationals, Indian Americans, Persons of Indian Origin and all Friends of India in the Midwest Region of United States of America. 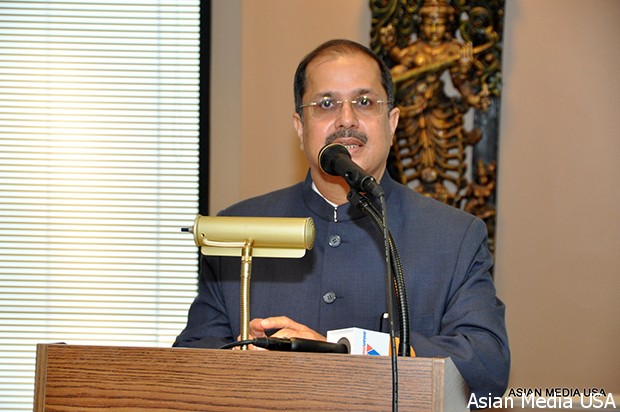 I would like to acknowledge the gracious presence of Hon’ble Dan Rutherford, Illinois State Treasurer, Hon’ble Dorothy Brown, Clerk, Circuit Court of Cook County, Illinois and our Special Guest Dr. Richard Lariviere, President, The Field Museum of Chicago. I understand that Congressman Hon’ble Bill Foster would also join the celebrations soon. We are indeed greatly honored by your presence this evening.

We also have amidst us representatives from the offices of Governor of Illinois Hon’ble Pat Quinn, Mayor of Chicago Hon’ble Rahm Emanuel and the Attorney General of Illinois Hon’ble Lisa Madigan, who would convey the greetings on behalf of these high dignitaries.

I would be failing in my duty if I do not acknowledge the enormous contribution made by the Indian Diaspora in the United States in building bridges of understanding between our two countries and promoting greater understanding among all cultures in this truly multi-ethnic society. 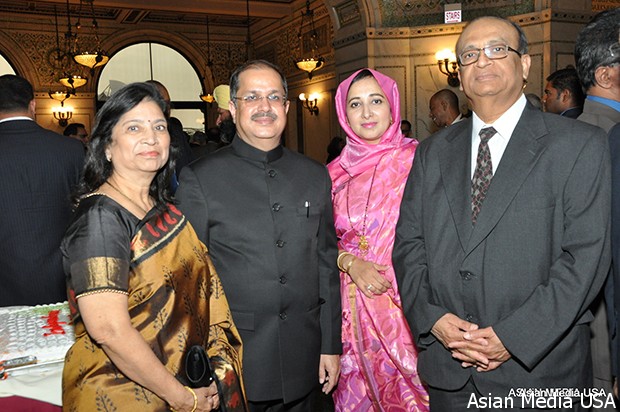 Cake-cutting by the Consul General followed amid clapping and cheers. Hon’ble Dan Rutherford, Illinois State Treasurer, Hon’ble Dorothy Brown, Clerk, Circuit Court of the of Cook County,IL; Special Guest Dr. Rachard Lariviere, President, The Field Museum of Chicago; Mr. Daniel Goff form the Office of the Governor of Illinois on behalf of Governor Hon’ble Pat Quinn; Ms. Jenny Cizner from the Office of the Mayor of Chicago Hon’ble Rahm Emanuel; Ms. Nettie Lasko from the Office of Attorney General of Illinois Lisa Madison read messages and all said in nutshell that since gaining independence in 1947, India has risen to become one of the world’s largest and fastest growing economies thanks to the remarkable work ethic of its people. made brief remarks commending Indo-US relationship, Congratulating India and Indian diasporas.

Simultaneously with the reception Performances by Instrumental Music Group- Ms. Sarswati Ranganathan and her group of six members relished the Dignitaries.