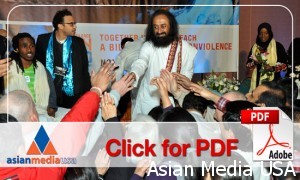 Chicago IL: In response to the recent wave of violence across the USA, the Art of Living Foundation (AOLF) has launched an ambitious movement, Non-Violence: No Higher Calling (NonVio) that was kicked off personally from Chicago by AOLF founder Sri Sri Ravi Shankar at the Donald E. Stephens Convention Center in Rosemont the evening of Thursday, March 28, 2013.

Significant participation of local grassroots civic organizations grappling with this pandemic, having Chicago as its epicenter, was capped by vocal endorsements from Illinois politicians and bureaucrats. Present were US Representatives Jan Schakowsky (9th District) and Danny Davis (7th), Cook County Board President Toni Preckwinkle, and 47th Ward Alderman Ameya Pawar. Governor Pat Quinn’s resolution making March 28 “Non-Violence: No Higher Calling” Day across Illinois was introduced by AOLF teacher for the past 20 years Debra Poneman and read out by the Governor’s representative Teresa Marr, who presented a plaque to Sri Sri Ravi Shankar in attestation. This NonVio campaign calls for individual pledges to acts of nonviolence to counter the growing violence epidemic (www.nonvio.org). The goal is to accumulate one billion pledges, which is100 pledges for every one act of violence recorded in the US each year.

For Ravi Shankar, the root cause of societal violence is individual stress that may be relieved and avoided through the deep relaxation that comes with meditation and a practice of regulated breathing (Sudarshana Kriya) taught through AOLF. Otherwise the dammed up negative emotions are suddenly unleashed in irrational and (self-) destructive acts. Sri Sri also recounted his experiences in war-torn Iraq and repeated points from the recent Huffington Post article where he was quoted as saying that “inside every culprit is a victim waiting to be heard” and “a joyful person will not commit acts of violence.” In the presence of the ideal human of Patanjali’s Yoga Sutras, others simply lose their animosity. “Keep a big smile on the face and let it percolate the whole body and every cell,” he concluded. He also gave everyone a profound experience of deep meditation.

What lent authenticity, immediacy, and practicality to his message was the presence of both victims and perpetrators of gang violence from the worst neighborhoods in the greater Chicago area. Acknowledging the despair and helplessness of the young, MC Juliet Gutierez, counselor at West Town Academy, declared that we cannot wait for authorities to initiate a non-violence movement. She introduced community leaders present who exemplify the possibility of individual and social change. Having signed the pledge for 365 days of nonviolent acts, Congresswoman Schakowsky focused on the Violence against Women Act that was renewed last year and insisted the USA must be a leader against violence inflicted on women around the world. Congressman Davis’ emphasis was how connecting with our “brothers and sisters” was the way to finding both oneself and God, echoed later by Ravi Shankar’s remark that “what about me?” is the mantra for depression. Preckwinkle, who serves a county of over five million, recounted her firsthand experience as a teacher of children permanently traumatized by witnessing violence and its destructive impact on our communities. She said that the only way out is for ordinary people to take responsibility to act. Nilesh Patel then introduced Ravi Shankar with a brief video on his initiatives transcending race, nationality, and other barriers.

Debra Poneman then announced the honorees for the evening. They included founder of Run for NonVio, Alfred Pedro, who had lost 2 brothers to gun violence. He himself dodged becoming a gang member by devoting himself to ballroom dancing. Now an avid runner, he has raised hundreds of dollars in pledges and has run over 200 miles for NonVio.

The next honoree was former NFL linebacker and founder of “Freeze and Think” Levar Fisher. After a devastating knee injury ended his football career, Levar committed his life to teaching our youth to stop and think before committing an act that could change their lives forever.

Honorees Ronald Holt and Annette Nance Holt of the Blair Holt Memorial Foundation lost their sixteen-year-old son Blair, when he tried to shield a friend from gunfire aboard a CTA bus. Their Purpose Over Pain foundation reaches out both emotionally and materially to other parents, who are likewise struggling to come to grips with the loss of their children.

Earlier involved in drug trafficking herself, honoree Ameena Mathews is the daughter of gang leader Jeff Fort who is serving time in a federal prison. She now puts her life at daily risk as a “violence interrupter” for the Chicago-based organization Cease Fire.

Photographer Carlos Javier Ortiz was honored for creating the award winning photographic series “Too Young to Die,” that documents youth violence and its true costs in North and Central America.

Honoree Ondelee Perteet, was shot in 2009 at a birthday party given by his sister. The bullet severed his spin and he became a paraplegic at the age of 14. His mom Deetreena wheeled him on stage and although the doctors said he would never regain the use of his limbs, he held the mircrophone and shared some of the most moving inspiration of the night. A determined young man, Ondelee now speaks at schools on the impact of gun violence and has even taken a few steps with the aid of crutches.

The final honoree of the night was 88-year old Ratanji Dhimar, who was with Gandhi during India’s freedom movement. Gandhi and his Freedom Fighters embodied the principle of nonviolence as a legitimate resistance (satyagraha) to structural (as opposed to overt) violence imposed by hegemonic powers.

The five-man singing group, The Voices, known as Chicago’s answer to Motown, began the event with an original song about ending violence called “Right Now” accompanied by a powerful montage of images of gun violence and its consequences. They also sang “Amazing Grace” in perfect five-part harmony and ended the evening inviting everyone to get on “The Love Train.”

Sri Sri’s vision of nonviolent transformation is being implemented through service projects in over 150 countries worldwide. Groundbreaking work is being done through AOLF’s sister organization, The International Association for Human Values (IAHV) with veterans suffering from PTSD, local prison inmates (including those at Stateville Correctional Center and the Cook County Jail), and with students through the Youth Empowerment Seminars (YES! for schools) now being taught at numerous schools throughout the Chicago area. As an ambassador of peace and a respected neutral figure, Sri Sri has been invited by governments throughout the world to play a key role in conflict resolution and has brought opposing parties to the negotiating table in Iraq, the Ivory Coast, Kosovo, Kashmir and Sri Lanka.

Bishop Carlton Pearson (pictured here with his wife Gina and Ravi Shankar) is a former evangelical Christian minister who gave up a 10,000 member church in Tulsa, Oklahoma when he had an awakening that God loves everybody and every human is created in the likeness of God, even Hindus and Jews and Muslims and gay men and women – and that no one was going to burn eternally in hell. When he started preaching this, which he called “The Gospel of Inclusion,” he was branded a heretic and excommunicated from the Christian church. He now leads a new church in Chicago called New Dimensions.