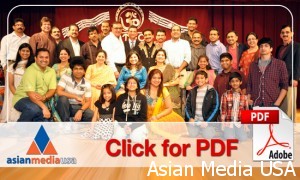 Chicago IL: HTGC (Hindu Temple of Greater Chicago) in Lemont hosted its semi-annual fund raising dinner of 2013 on Saturday, March 16. This event had a different format from the previous fund raisers in so many ways. As the intent of the program was to bring in as many people into the auditorium as possible, the guests were treated to a nice dinner in buffet style before the start of the main event in the Gupta dining hall instead of the usual banquet style dinner during the event in the Rathi Auditorium. Also, this one provided a platform for as many as eight local singers and other accompanying artists who were able to show their musical talents during the program in all four southern languages in addition to Hindi. A capacity crowd of more than 400 people enjoyed the event that lasted over four hours and was co-sponsored by Ram Raghuraman of RR International.

The program was off to a good start at 7:30 pm with an invocation prayer from temple priests Sri Saikrishna and Sri Vengatesan followed by brief welcoming addresses by Finance Committee chair Dr. Rohini Udupa and the president Mr. Tilak Marwaha. Both exhorted the audiences for generous donations. Later Mr. Srinivasarao made a presentation on the elevator and kitchen improvement projects for which the funds raised during the evening will be used.

The musical program was emceed by Ram Raghuraman, Usha Pariti, Sunita Singh and Krishna Mohan who had introduced the artists to the audiences. The artists – Bhupendra Singh, Rama Ranghuraman, Pavithra Anand, Praveen Jaligama, Parimala Prasad, Sunil Vasupillai, Arvind Venkit and Christine Phillip belted out many Hindi, Telugu, Tamil, Kannada and Malayalam movie hits that absolutely thrilled the audiences through the entire evening. As the oldies of Kishore Kumar like “Khilte hain gul yahan” and “Mere naina saawan bhado” sung by Bhupendra Singh took the audiences down the memory lane, dancing numbers of Pancham Da R. D. Burman beautifully rendered by Pavithra, Rama and Bhupendra brought the auditorium crowds to their feet as the evening ebbed away.

A segment of the program was devoted to honor the Sunday school teachers with plaques as last year’s president Mr. Gopal Srinivasan introduced them to the audiences. The school that was started with just two teachers and six students made a remarkable progress and grew to the current strength of sixty five teachers and more than four hundred children. Also recognized at this time was Dr. Rohini Udupa for her outstanding services dedication as the chair person for the Finance committee.

As appeals for donations continued through the evening, checks and pledges started pouring in. Donations are infectious after all – one of the current trustees of the temple, Mr. Agadi Lakshman said he will match the donations of the evening with an equal contribution of his own, effectively doubling the entire amount raised during the program.

The temple secretary Ms. Prasanna Reddy proposed a vote of thanks towards the end of the program. Dr. Rohini Udupa – the chair for the Finance Committee, Ms. Satya Srenivasan – the chair for the Prasadam Committee, the trustees and other volunteers of the temple are to be truly appreciated for their efforts organizing the program, given how daunting the entire task was.