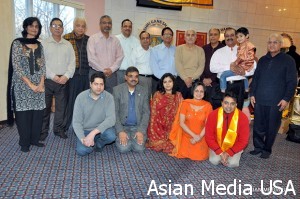 Chicago IL: As the clock struck 12 on the midnight of Dec. 31st, the devotees of Hari Om Mandir welcomed the New Year with dhol, shankhs and Ram Dhun in melodious voice of Asha Khanna ji. Asha ji joined the congregation around 11pm in reading Ramayan.

As the clock inched towards midnight the crowds grew in numbers and so did the excitement of the crowd. The dropping temperatures didn’t deter the people to come in
and join in singing the Ram Dhun and at midnight the hall was filled with shankh and by Priest Dinesh ji and one of the founder members of the society Ram Verma ji. Subhash Sharma ji along with the bhajan Mandli chanted Ram Dhun to usher in the New Year

As everyone bid adieu to 2012 they welcomed the New Year by embracing and wishing each other, offering sweets and praying for the well being of one and all.

Hari Om Mandir every year welcomes the new year with Akhand Ramayan Path which starts on Dec 31st and takes 24 hours and ends on Jan 1st. This year was also not different.
Prabhu ka Bhandara is open for 4 hours and people come and have darshan at their convenience. This year the food on Saturday was arranged by Tangri & Desor family, the snacks were prepared by Mrs. Aruna Lal and Mrs. Madhu Gupta. The langar for the new year was sponsored by Salwan & Sharma family. Tea and snacks were available for the whole night.

Large number of devotees volunteer to read the Ramayan during this 24 hour period. Then there are certain dedicated devotees who have celebrated every new year eve and new year morning in the temple. Ram Verma ji, Tangri family, Bharel family are the regular readers in the night.

The priests did an excellent job and dressed the deities in gorgeous new dresses and the whole Mandir was beautifully decorated. This year the special attraction was the Nav Grah, the PRAN PRATISHTA for which was recently done.

In the morning the Ramayan path ended exactly in 24 hours. This was followed by Bhajan Kirtan. Asha Khanna ji joined the congregation in singing bhajans along with Rama Kapoor ji, Deepak & Mona Sharma.

The new year doesn’t only bring the change of the calendar date it also brought a change the management of the temple. After the bhajans the outgoing president Rajeev Bharel, gave an emotional speech and thanked everyone for all the support he got from the Executive Board and Board of Trustees. He also thanked the priests and temple employees along with the devotees who supported him in fulfilling his duties. Thereafter he invited the Board of Trustees Chairman Mr. Ayodhia Salwan to join him in thanking devotees and giving the life time achievement awards. Hari Om temple every year on Jan 1st honors the devotees with Life Time Achievement awards to people who have dedicated their time and services to the temple. This year the recipient of the Award were Ram & Gaitri Verma, who has been associated with the society since 1960’s. The second award went to Mr. N. K. Sharma.

Mr. A.N. Salwan also thanked the outgoing team and highlighted their achievements in getting the new gate, Nav Grah Stahpna and repaving of the parking lots. He was joined on the podium with his members of the Board of Trustees to give plaques to the outgoing Executive Board members- Rajeev Bharel, Gopal Tiwari and Anil Saxena. For the outgoing president he had the famous joke of “Main Hoon Na”. He also announced the availability of a DVD of pictures of various events in 2012.

Mr. Brij Sharma thanked all the Executive Board members for their confidence and gracefully accepted the responsibilities of the President of Executive Board. In his speech he stressed his sense of dedication and responsibility and prayed to Devi Maa to help him perform the duties to his best. He also assured that he will work hard and find ways to get more participation in the temple activities. He also committed himself to get going on more Senior Citizen’s and children programs.

Mr. Sharma highlighted the dedication of Mr. Gopal Tiwari for the past 3 years as the Treasurer. He also reminded everyone of the efforts put in Mr. Anil Saxena as the Fund Raising Chairman and Special events organizer. Mr. Brij Sharma also requested outgoing members for their support and help in fulfilling his duties.

Thereafter Aarti was performed and Ladoos were distributed in Prasad.