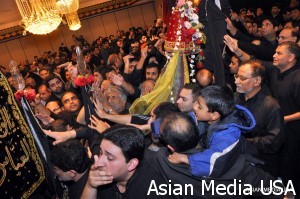 Chicago IL: The Shia Muslims of North America observed Muhharam on Thursday November 22, 2012, at Ramada Inn, 780 North Avenue, Glendale Heights, IL, 60139. This month is a time of mourning for the Holy prophet’s grandson, Imam Hussein. He is a man that stood for righteousness and piety. His sacrifice, believed by the Shia Muslims, is a sacrifice for all of humanity. This is a very auspicious time and is dedicated to Imam Hussein and his brother, Hazrat Abbas.

Shi’i Muslims around the world annually dedicate the first ten days, called ‘Ashura, of their new year(and continues through forty days, called Arbayeen) to commemorating a battle that took place nearly 1400 years ago, in 680 A.D., on the tenth of Muharram, the first month in the Islamic calendar. The battle took place between Prophet Muhammad’s grandson, whose name is Husayn, son of Imam ‘Ali and Fatima Zahra, the only daughter of Prophet Muhammad, and the Islamic empire at the time. Many of those living at the time of Husayn looked to him as someone who clearly resembled Prophet Muhammad in his teachings and in the way that he lived his life—more than anyone else alive at that time.

In fact, Shi’i Muslims in particular regard Husayn as their third Imam, or the third divinely chosen successor to follow Prophet Muhammad. Yazid, son of Mu’awiyah, the tyrannical leader of the Muslim world at the time, led an oppressive regime that clearly belittled his people and denied basic human dignity to those that he ruled over. Yazid demanded that Husayn pay allegiance to him knowing that if Husayn did so, then that would solidify his legitimacy as the sole authoritative leader of the Muslim world. However, Imam Husayn, preaching a version of Islam that vastly contradicted the governing party of the time (and one that resonated with Prophet Muhammad’s teachings) refused Yazid’s demand. By refusing to submit his allegiance, however, Imam Husayn along with his closest friends and family, were brutally massacred on the tenth day of Muharram at Karbala, Iraq. Imam Husayn, which historical accounts attest that the Prophet Muhammad loved dearly, watched one by one as his family members fought and died, from his closest friend, to his brother, to his two sons, one only eighteen, and the other only six months.

According to several reports, Imam Husayn’s army consisted of only seventy-two people, whereas Yazid’s army consisted of sixty thousand. For three days prior to the battle, the entire caravan of supporters, including women and children, were denied food and water. What is additionally considered tragic is that Imam Husayn was urged, particularly by those living in a nearby city called Kufa, encompassing portions of modern day Iraq, to lead a revolution against Yazid. Yet, despite how they viewed Husayn, abandoned him and his family to be brutally massacred.

Shi’i Muslims have been congregating since the incident itself took place nearly 1400 years ago. According to Shi’i Muslims, recounting this story annually preserves the message of Imam Husayn and keeps not only the story, but the teachings from the story, alive in the hearts and consciousness of Muslims everywhere. Though most Muslims, whether they are Shi’i or not, respect Imam Husayn, Shi’i Muslims in particular hold visible demonstrations and programs around the world in which they recount the narratives of what happened prior to the battle, the battle itself, and the incidences of what happened to the women and children following the battle. These programs generally begin with recitation of poetry that is meant to evoke emotions of sadness, and the despair that Imam Husayn and those that supported him felt.

They are then usually followed by a scholar lecturing on Islamic teachings that then tie it into the teachings from the tragedy itself. The programs end with various expressions of sadness. Most Shi’i Muslims beat their chest as a symbol of mourning for what happened to Imam Husayn, while again melodically reciting poetry that retells the emotional story of Imam Husayn. The retelling of this story and remembering Imam Husayn is very prominent in the Shi’i tradition, however the way in which Shi’i Muslims commemorate vary from culture to culture.