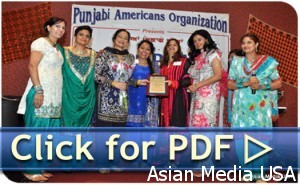 Punjabi Americans Organization aims to promote unity and progress of all Punjabi Indian-Americans. To promote cultural and religious values to their children and make the mainstream aware of their rich cultural heritage, to serve the community through seminars, discussions, forums and to address various issues faced by the different generations collectively. Main purpose of organizing this type of event is to expose women by bringing them out to the outside world from their routine house hold work, offer an opportunity to meet with the community and pass time with amusement and joy, wearing dresses of their choices. It is a great festival in the Punjabi Culture that exists for the young married woman who go to their maiden homes and go on the swings, buy new clothes and go to the festival. Families from Chicago land, Indiana, Milwaukee and Illinois attended in large number and enjoyed immensely.

Organizers of this event decorated the event hall with Punjabi dupattas, saris, and other traditional Punjabi dresses as well as with colorful clothes, flowers, and garlands. It appeared like a rainbow spread across everywhere in the event hall. Various traditional Punjabi music instruments at the entrance presented a view of traditional Punjab back home. The gathering of huge crowds around the stalls of henna, bangles, facial makeup, and Indian dresses really gave the feeling of traditional Indian fair. As soon as attendees entered the event hall, the decorated swing caught the eyes of every one and reminded them of their beautiful past. There were different stalls for Mehndi, Jewelery, Gift Items, Punjabi Suits and Kurtis in addition to Gidha, Dholki, Singing and Dancing with live DJ. Delicious Indian snacks were served with hot tea for event attendees. Event attendees also enjoyed a delicious gourmet lunch at this event.

On behalf of Organizing Committee, Ms. Minni Multani and Ms. Sukhi Singh welcomed the audience and thanked all the sponsors for their generous donations. Neha Singh a young girl of only 17 took over as MC at the beginning portion of the event and she handled it nicely without any stage fright. The event started with the traditional Open Dholki where the audience came up to the stage to participate in singing Punjabi Songs. Thereafter the program went on to present other cultural performances such a dance from the Manhani Girls from Indiana and a solo dance performed by 23-year-old Navroop.

Then Pamy Gill took charge of MC in promising manner. there were songs sung by Mrs. Pooja Daliwa from Indiana. It followed dance from Sujata Garg and Dipti Gupta. Then followed a beautiful dance from girls of Lasyette De Shan Group.

Then Pammi Gill took charge as MC in a promising manner. There were songs sung by Mrs. Pooja Daliwal from Milwaukee. It was then followed by a dance by Dr. Sujata Garg and Dr.Dipti Gupta. Then followed a beautiful dance by the girls of Lafayette De Shaan Group, a group from Indiana. There was also a Gidha performance by the Kudiyaan Punjab Deeyan, a gidha group by girls between ages 7 to 13.

Then there was a song by Kanchan Ji M.B.A. who has been engaged in research and manufacturing of automated External Defibrillator, a life saving device, which is portable, easy to use and now available for home and professional use. She said in her interview that she is engaged in this business with a mission to help those who suffer from Sudden Cardiac Arrest, as she could not save her own mother in the past because it was not available. She is the CEO of General Medical Devices Inc. This was followed by Gidha by Kudeeya Punjabi Diyan.

There was a live show by Satwinder Bitti and she performed beautifully along with Tarique Khan, as the Sound Engineer, Ajay Randhawa on the Key Board 1,and Narinder Kumar on Key Board 2, Bitto Devgan on Electronic Drums, Sherlock on Dhol and Gopal on Tabla. Satwinder Bitti who is known as the premier female artist who has worked with numerous artists including Safri Boys, Bally Sagoo and Bhupinder Babbal amongst others. At the climax of this event, all ladies and girls who attended “Teeyan Da Mela” performed “Gidha” and dance was a truly enjoyed by everyone.
Proceedings of ‘Teeyan Da Mela’ were going on in full swing, when suddenly the news of the attack by a white gunmen at the Gurdwara in Wisconsin began to spread and the tempo of the event quickly perished and was only continued for the purpose of finishing the event. They immmediately cancelled the award function where they were going to give awards to various personalities. A moment of silence was observed as well and the event was concluded about two hours early.

Asian Media USA (Suresh Bodiwala Chairman, Dr. Chandrakant Modi President and Jyotikumar Chokshi Chairman President Editor) offer their deepest condolences to all Sikh sisters and brothers in Oak Creek, Wisconsin. With our common heritage and history, American Sikhs and Hindus share a unique bond unlike any other two religious communities. We pray that the souls of the deceased find peace. We commend the bravery and heroism of the members of the congregation and the Oak Creek first responders. Our thoughts and prayers are with the injured and the families of all the victims, and we hold our hands out to our sisters and brothers in their time of need. We are enormously saddened by this incidence in which six persons were killed. It is really a brutal attack on innocent people. We condemn the attack on the Gurdwara. Incidents like this are very tragic, especially when it happens in a place of worship. This is a senseless Act of violence targeting a religious place of worship.