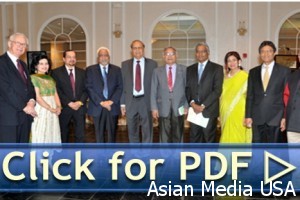 During social hour everybody greeted each other and enjoyed a casual evening accompanied by soft drinks and delicious snacks. The cultural event and banquet dinner followed thereafter with the Honorable Dorothy Brown, Clerk of the Circuit Court of Cook County as the Guest of Honor. Beena Patel, the charming and dynamic MC of the evening proudly announced the election of Dr. Ghanshyam Pandey, as the National President of AIA. The program started with the American National Anthem performed by Nishal Patel (Grandson of Naren Patel) which was followed by the Indian National Anthem performed by Mr. Anil Sharma. Welcome address was delivered by Mr. Surinder Rametra, Vice President, AIA, and he welcomed all the invited guests and members of AIA.

Cultural program started with a group Dance presented by Payalia Dance Studio, Choreographed by Trupti Patel, and this was followed by a Hindi Song sung by Nishal Patel.

Thereafter Beena Patel introduced Dr. Ghanshyam Pandey, a renowned Research Scientist, Philanthropist and a prominent member of the Chicago Indian Community. He was elected as the National President of the Association of Indians in America (AIA), in a recently held election.

Dr. Ghanshyam Pandey addressed the gathering and expressed his sincere gratitude for electing him to the position of the National President of Association of Indians in America, and for the trust and confidence placed on him. “The AIA is a unique organization in many ways. The AIA is not only the oldest Indian organization in the United States, founded in 1967 but it is also the only organization with individual membership and chapters across the Nation”, he said. The Illinois chapter is one of the largest and the most active chapter that organizes youth and community programs in the Chicago area. The celebration of Gandhi Jayanthi by AIA Illinois chapter is one of its signature events which have been conducted annually since 1983. These chapters organize and conduct cultural, social and community events and provide strength to the National AIA. “AIA represents the hopes and aspirations of those immigrants who are united by their common bond of Indian Heritage and American dreams and promises. Goal of AIA is to offers a bond of unity and to concern itself with the social welfare of the Indians in the United States and to help them become a part of the American main stream”, he emphasized.

Next was a dance by Shriya Patel, Riya Patel, Ishani Majmudar and Mona Panchal, Choreographed by Dr. Sonal Patel. They performed for the song ‘Nimbuda Nimbuda’ from the movie: ‘Hum Dil De Chuke Sanam” Beena Patel introduced Vinod Bansal Chairman, Board of Trustees AIA National Committee, who in his short speech highlighted AIA activities and also suggested that lot more can be done. Beena Patel introduced Professor Ralph Nicholas, recipient of AIA award. He thanked AIA and commended AIA activities and wished for their continued success.

Beena Patel proudly presented Mr. Naren Patel, her own brother and a prominent Chicago Businessman. He is President and Chairman of Medstar Laboratory and Chairman and Prominent Board Member of many organizations. Mr. Naren Patel was also the President of AIA for last four years and he has brought the chapter on very good footing. Currently he is the Vice President of the National Executive Committee of AIA.

Naren Patel, in his short yet sweet speech remembered one and all who had helped him in performing his duties and without their support, could not have accomplished his goals. He particularly honored Beena Patel his own sister, without whose help he could not have done so many activities. He also thanked his wife and his family members. Narenbhai involved youth from our community by showcasing their talents and organizing Youth Dance & Singing Competition in Chicago. Every year, AIA Illinois Chapter hosted an Annual Banquet, Bazaar at the Daley Plaza, Flag Hoisting Ceremony and proudly celebrated Gandhi Jayanti. With full cooperation from the Indian consulate in Chicago, Counsel Attri and Mrs. Mukta Tomar, AIA was able to attract prominent dignitaries who visited Chicago to meet with their members. Illinois Speaker of the House, Michael Madigan, Illinois Secretary of State Jesse White, U.S. Congressman Michael Quigley, Cook County Commissioner, Larry Sufferdin, Cook County Sheriff, Tom Dart, and most of all, Dorothy Brown, Clerk of the
Circuit Court of Cook County, are part of this association.

Mr. Salil Mishra pledged to provide the leadership the Association requires in order to achieve its objectives and implement its strategies, made a commitment to listen, respond and work very closely with AIA Board, the executive committee and other members at large. He thanked Prof Ghanshyam Pandey and Mr. Naren Patel for their leadership, dedication, and vision over the years. He also thanked the Board for its support.

Next, Beena Patel introduced the Chief Guest, recently re-elected Clerk of the Circuit Court of Cook County, Ms. Dorothy Brown. Dorothy Brown congratulated AIA as an organization that promotes the involvement of Indian Americans in public policies, community, corporate and organizational leadership. “AIA truly represents the spirit of immigrants who strive to achieve the American dream while maintaining their cultural heritage” she said. She wished for the continued success of the Illinois Chapter of the Association of Indians in America. The MC recognized prominent dignitaries present including Kaviraj Chandrakant Patel, Shrishi Patel from Canada, Raja Krishnamurthi, Mr./Mrs. Santosh Kumar, Sunil Shah and many more. The function ended with a sumptuous Dinner along with a musical program of songs performed by Dr. Sonal Patel, Anil Sharma and his talented daughter.

Lastly, Mr. Virendra Gupta proposed the vote of thanks at the conclusion.

Speaking to Asian Media USA, Editor Jyotikumar Chokshi and Chairman Suresh Bodiwala, prominent community leader and CEO of Medstar Lab Mr. Naren Patel said that “AIA shines because of its strong executive committee and its members. We make the time to ensure that AIA serves as a medium to unite all professionals, religions and different ethnic and regional groups in American Society to help them maintain their Indian identity and strong family values that all Indians take pride in. Our organization will remain strong, loyal and committed to the mission and goals of AIA”.