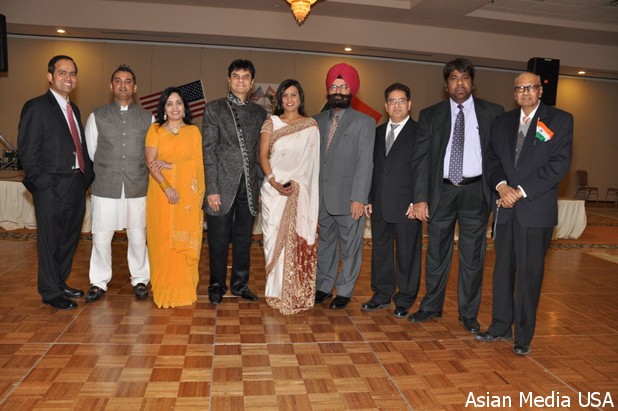 After lamp lighting ceremony, emcee for the evening Sanjeev Singh introduced FIA outgoing President Sunil Shah. Mr. Shah welcomed the audience, and enumerated what FIA-IL achieved last year during his term having organized number of events, celebrating beautiful festivals of India, supporting several candidates who are now elected officials. Deep gratitude was expressed towards sponsors & media people as they were the true backbone of such successful events. “It was solely due to support of my family and FIA executive board members that I was able to lay a strong foundation to this association,” said Mr. Shah. With great pride and excitement he invited the FIA-IL 2012 Executive board members on the stage and welcomed Honorable judge Ketki Steffan on the stage to administer the oath ceremony.

Rajinder S. Mago, a well known Indian American community leader, was invited as a guest emcee to announce introductions, recognitions, and speeches of all the dignitaries and political candidates present at the program. The Illinois State Treasurer Dan Rutherford congratulated the organizers and said that he has visited India several times, he loves to attend the Indian American events like this one, and always tries his best to attend as long as enough advance notice is given to adjust his schedule.

The State Senator Kirk Dillard, also a candidate for reelection from 24th district, said that he is connected with Indian American community since childhood through personal friendships and medical care professionals. Mayor Peter DiCianni of Elmhurst welcomed the Indian American community to Elmhurst and wished them happy republic day. He also presented a republic day proclamation plaque on behalf of the village of Elmhurst to FIA President Onkar Singh Sangha.

The chief guest of the evening Mr. Harinder Singh, CEO of Management Information Technology Solutions (MITS) congratulated the FIA-IL program organizers for a job well done and expressed joy that our community here remains connected to their roots and heritage through events and gatherings like these.

The incoming President of FIA-IL Mr. Onkar Singh Sangha gave a welcome speech which was followed by scintillating Kids Dance performance The evening was filled with patriotic songs and colorful dance performances. Mr. Mago, also a veteran artist himself, emceed the cultural performances segment of the program.

Executive Vice President Rita Singh proposed a vote by thanks followed by delicious dinner. With vast experience in entertainment and show business both Rita singh and Monty Syed, who are the pillars of FIA-IL, have shown once again that when it comes to organizing events, FIA-IL, Chicago is the best.