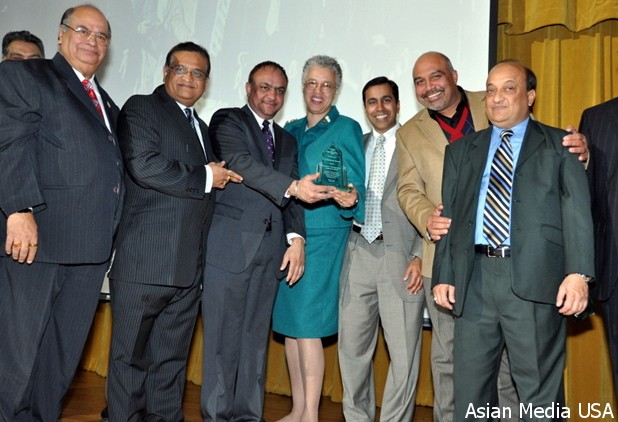 The India Republic Gala was set in motion with a string of colorful bhangra, garbo, patriotic, bollywood and american-jazz dance presentations by a group of talented youngsters which was preceded by a grand ‘sankranthi’ dance presentation from a group of young girls with colorful traditional costumes representing Telugu Association of Greater Chicago [TAGC] which set the tone for a grand festive evening. The evening festivities were presided over jointly by FIA President Satish ‘Sunny’ Gabhawala and Trustee’s Chairman Iftekhar Shareef.

Chief Guest Hon. Toni Preckwinkle, President of Cook County, in her remarks, extended warm India Republic Day greetings and hailed India as a great democracy and commended its people for ushering remarkable progress in all fields. Cook County President Preckwinkle took the opportunity to push the candidacy of Raja Krishnamoorthi, a Democratic candidate for the 8th congressional district characterizing him as the best choice by Indian American community to get Indian presence in the US Congress

President Satish ‘Sunny’ Gabhawala addressing the packed banquet hall thanked the community for their overwhelming presence in unitedly joining FIA in celebrating the 63rd India’s Republic. Satish Gabhawala praised the leadership of FIA for their partnership and support in hosting this event of great significance in the history of post-independent India and its robust march towards democracy.

FIA Trustees Chairman Iftekhar Shareef welcomed the guests and presided over the event. Iftekhar Shareef invited Cook County President Toni Precwinkle on the dais and praised her for her determined devotion to ushering reforms and changes that would make cook county government clean, transparent, accountable and efficient. Iftekhar Shareef thanked Hon. Toni Preckwinkle for her presence which he added significantly elevated the evening’s festivities.

Trustee Chairman Iftekhar Shareef said that there are twenty five different states in India each distinctly marked by different cultures and languages, but still there is a remarkable sense of harmony and brotherhood that binds all Indians in unbreakable unity and they all collectively clamor for one Indian identity.

There was a special acknowledgement of the Event Chairman Ravi Harsoor jointly by Satish Gabhwala and Iftekhar Shareef who praised him for playing a pivotal role in hosting the India Republic day event. Naren Patel, prominent Indian American leader, in his brief remarks, extended warm greetings and praised FIA for their commitment to inspiring patriotic spirit among the Indian Americans by hosting such events of historical relevance.

Mrs. Usha Kumaria and Mr. Om Prakash Kumaria of Gandhi Foundation, Skokie, Illinois, praised the efforts of FIA in hosting such a memorable event including the India Independence Day Parades in the past which brings in huge droves of people from the Midwest. Airline representatives from American Airline Mr. Raj Siddu, Mohammed Anwar from Etihad Airways, Shahab from Qatar Airways where present at the event to showcase their support.