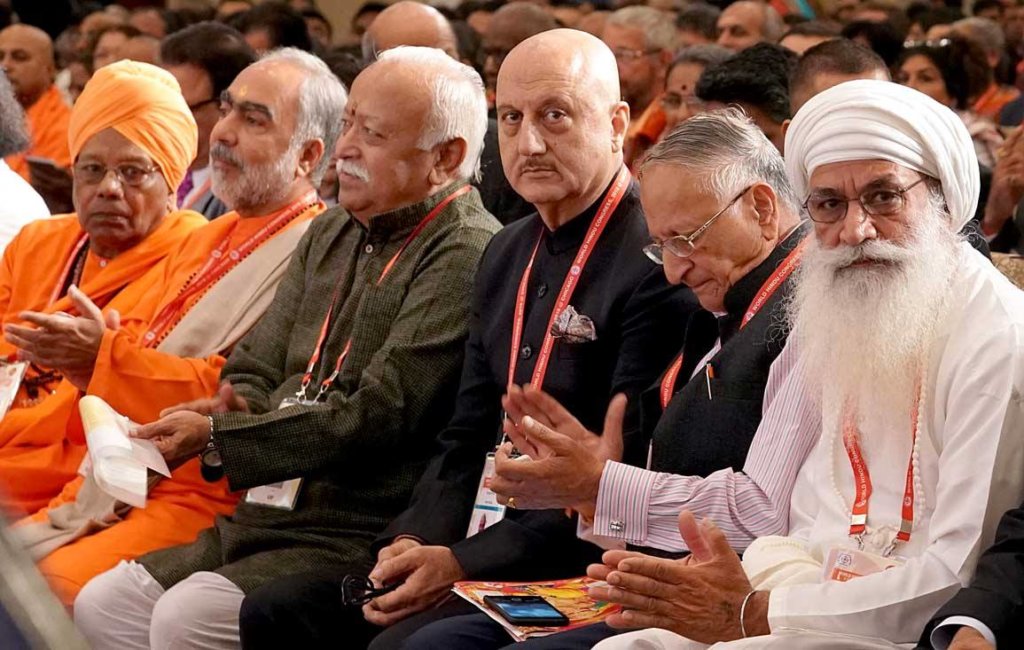 Some 2,500 Hindus from 60 countries, including high profile political leaders, gathered in Chicago Sept. 7-9, for the second World Hindu Congress 2018, coinciding with Swami Vivekananda’s 1893 address to the World Parliament of Religions. “Think collectively, Achieve Valiantly” was the theme of the conference which began with the traditional resounding sound of conchs with a backdrop of a life-size statue of Swami Vivekananda at the Westin Lombard York Town Center in Chicago.

Organized around daily plenary meetings and 7 concurrent conferences that included the economy, women, youth, education, media, politics, and Hindu organization, the conference ended with several recommendations on how to protect rights of Hindus around the world and highlight their achievements. 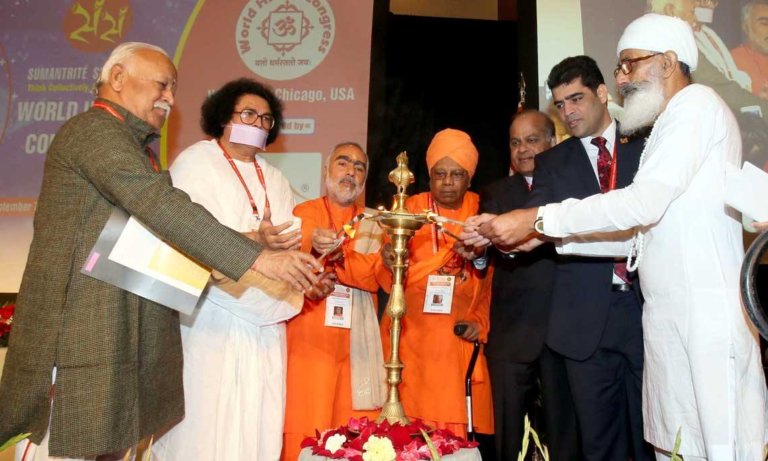 “There was so much networking going on. A lot more people would have come but registration was closed two months prior to the conference,” media coordinator Manu Shah, told Desi Talk. The global nature of the meetings was apparent from the 27 Hindus from Latin America, several from Fiji, Guyana, even Tokyo, and 300 youth from around the world, Shah noted. “It was very well organized. Everything was on schedule, sometimes with few minutes of delay because people had millions of questions,” she said. 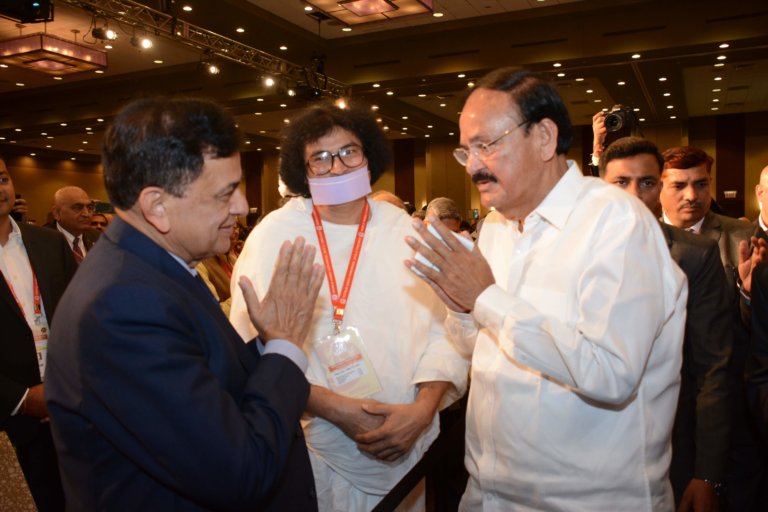 It is a great meeting and the presence of Mohan Bhagwat and India’s Vice President Naidu, it was a high quality content on what it means to be a Hindu and what is Hinduism. It tried to dispel misconceptions about the religion,” said Padma Shri Dr. Sudhir Parikh, chairman of Parikh Worldwide Media which was one of the sponsors of WHC 2018. “It also encouraged young people to conduct themselves according to the Hindu tenets because Hinduism is a way of life, and the world would be better if those were followed,” Dr. Parikh added. 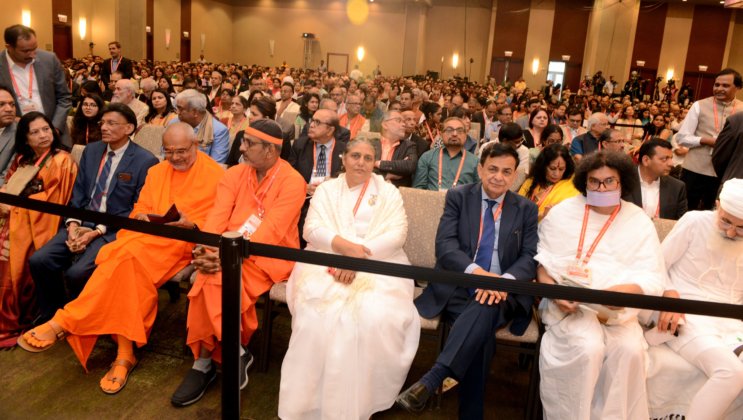 Some of the VIPs who attended the World Hindu Congress 2018, held in Chicago Sept. 7-9. Seen in photo among others, is Padma Shri Dr. Sudhir Parikh of Parikh Worldwide Media, third from right.

Hindus worldwide should become more visible as positive change makers in their respective countries they call home, was the main consensus emerging from World Hindu Congress 2018, Dr. Abhaya Asthana, convener of the conference said at the concluding session in Sunday, Sept. 9, according to a press release from WHC. 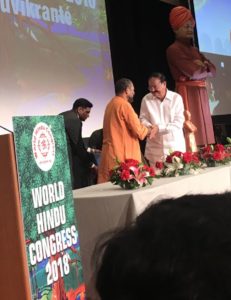 In his keynote address, India’s Vice President Venkaiah Naidu delivered called for following rededicating oneself to the ideals of Swami Vivekananda “for the greatness of mankind.”

Naidu, who peppered his speech with generous Sanskrit and Telugu quotes, emphasized the philosophy of tolerance and acceptance of all religions, and plurality, unity in diversity that Vivekananda embodied, and which are an essential part of the timeless, eternal, holistic, integrated and universal world view of Hinduism, Indo Asian News Service reported.

Compassion, service, charity, gender equality, protection of the environment are key ingredients of Hindu philosophy and relevant to this day, Naidu said, adding that one should not condemn or appease other religions for the sake of votes, Naidu noted.

Asserting that Hindus neither oppose anybody nor aspire to dominate, Rashtriya Swayamsevak Sangh (RSS) chief Mohan Bhagwat on Feb. 8,  Indo Asian News Service reported. “We do not have any aspects of dominance. Hindus do not live to oppose anybody. We even allow the pests to live. There are people who may oppose us. You have to tackle them without harming them,” said Bhagwat.

“Why are we suffering for 1000 years? We had everything but we forgot to practice values. We also forgot to work together. Hindu society has largest number of meritorious people in many sectors. But they never come together, stay together,” Bhagwat is reported saying. adding, “Coming together of Hindus itself was a difficult task.”

Kher saluted “our country India…a place that has been home to all cultures, religions and faiths. Despite being refugees in their own country, Kashmiri Pandits have practiced tolerance for 28 years like nobody ever has, the press release from WHC 2018, quoted him saying.

Some of the concrete outcomes from the congress included setting up a permanent secretariat in the United States or United Kingdom for the cause of Hindu rights around the globe. To accomplish this task, a group of eminent persons will be recruited, a WHC press release said.

The need to assert a strong political voice especially in countries in the Caribbean and Africa, and developing young political leaders. A dynamic digital database of all political leaders by country is to be developed, the WHC said. The parallel sessions, on youth, media, economy, women, education, and Hindu organizations outlined significant steps to be undertaken in the near future.

Hindu youth should leverage their social media skills, speak out against biased portrayals of Hindus, draw attention to persecution of Hindus, educate emerging politicians on the effective use of media, and identify the key roadblock to Hindu youth in embracing their Hindu identity proudly were key points.

The conference decided to establish at least 20 internships for youth who aspire to enter politics. 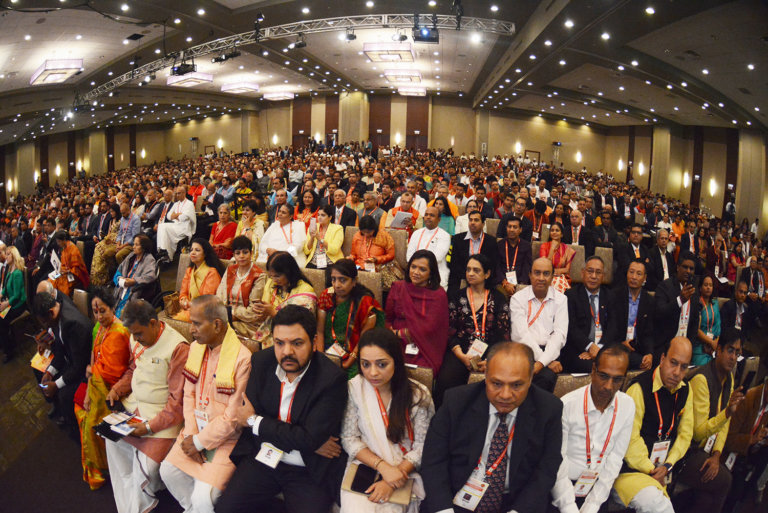 Some 2,500 delegates from around the world attended the 2nd World Hindu Congress Sept. 7-9, in Chicago. (Photo: WHC)

The Hindu organizational conference recommended working on freeing temples from government control and expanding operational outreach;  as well as strategizing how Hindu activism in the U.S. can be replicated elsewhere.

The media conference called for activist media entrepreneurs who are not profit driven and how writing contemporary stories that are relevant to the present generation and make it “cool” for younger generations. 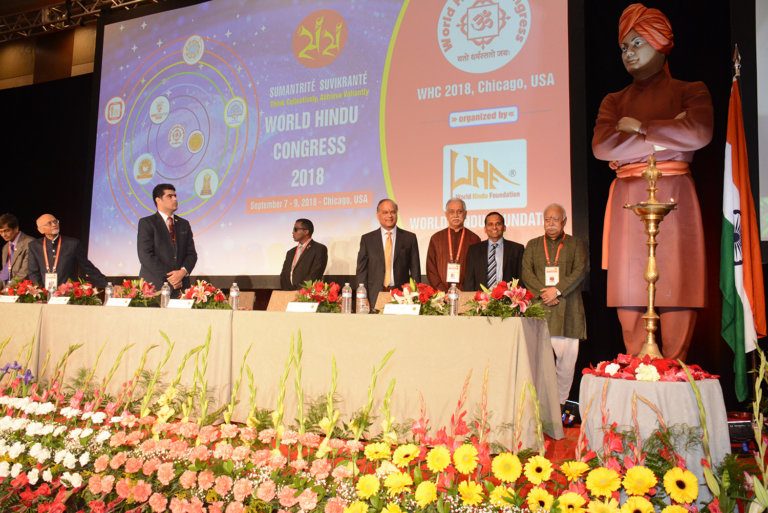 A strategy for developing scholarship in religious studies and a strong international network of Hindu scholars were the outcomes of the Education conference.

Fifty six posters on inspirational stories and community service projects were on display.

The poster on Sewa International’s “Toilet and hygiene project for the Girl Child,” “Pakistani-Hindu – A genocide forgotten,” and a poster by Gurukula.com were chosen as three best posters. 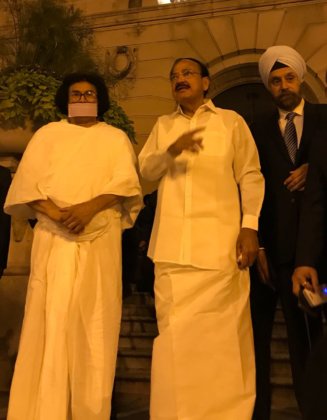 Mohandas Pai, chairperson of Board of Manipal Global, classical dancer Sonal Mansingh, and R. Nagaswamy, historian and archeologist, shared the dais for the third plenary session on Hindu Society: Glory of the Past, Pain of Present and Dream for Future. Prof. Subhash Kak moderated the session.

“We have a lot to be proud of,” Kak is quoted saying in the press release. He said many inventions and scientific theories of today had been written about in ancient literary works.

Mansingh spoke about “Kala, Sanskriti and Vidya” and how Nitrya is not just about dance. Every breath you take is a dance, the blood flowing in your veins is a dance, the heart beat is taal; Even the word Bharath has music in it – as Bha means love, Ra means raga and ta means taal, Mansingh said.

Pai, noted that India’s economy is $2.6 trillion strong as the third largest after China and the U.S., predicting India will become a $10 trillion economy by 2030, by which time basic necessities like food, shelter, electricity, water and healthcare, would be met, but investments were needed.

Nagaswamy spoke about Manu Dharma which he claimed was the first constitution and law code established 3,500 years ago, and describes how a child should be raised, how a king should rule, crime and punishment, among other things.

The congress recognized four organizations for their outstanding contributions to spreading Hindu philosophy: The Bochasanwasi Aksharpurshottam Swaminrayan Sanstha (BAPS) was honored for its “extreme visual idealism” seen in its architecturally beautiful mandirs; Chinmaya Mission for explaining the essence of the Gita; Geeta Press, Gorakhpur for making sacred Hindu literature easily accessible; and the International Society for Krishna Consciousness for spreading the message of Gita. 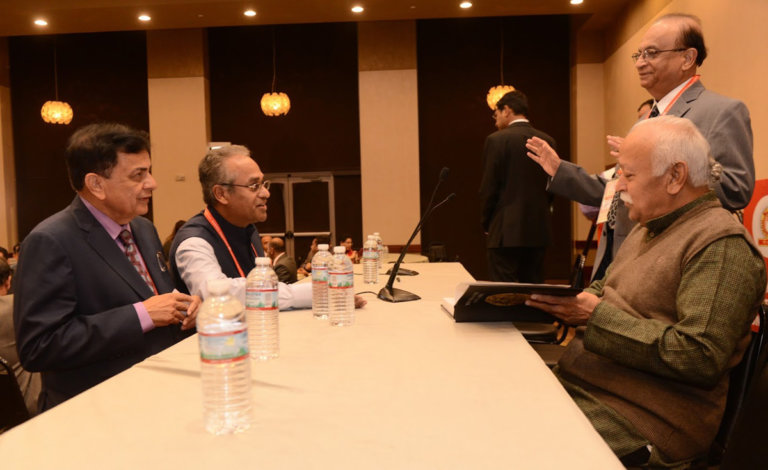 Vice Chair Raju Reddy, a technology entrepreneur from Silicon Valley, described WHC as an extraordinary opportunity to shape the dialogue about Hindus as change-makers going forward;

Conference host Dr. Shamkant Sheth spoke of the two years of hard work that went into bringing together the WHC 2018.

Organizers announced that the third World Hindu Congress will be held in Bangkok, Thailand, from Nov. 4 to 6, 2022. The conference theme will be “Victory of dharma, not adharma.”

The Chairman of the World Hindu Congress 2018, S.P. Kothari, said he and many speakers attending the conference received calls and petitions from organizations and individuals to withdraw from the Congress on the ground WHC or some of its organizers are “socially and religiously divisive.”

“I categorically reject this supposition,” Kothari is quoted saying in the press release. “…  I have chosen to disregard those petitions as originating from a lack of complete understanding of the World Hindu Congress.”

Kothari noted however that women have not fared well and this is a universal problem. “There is a large chasm and women’s talents haven’t been harnessed. Focus on education is the other area requiring reform,” the press release said referring to Kothari’s remarks.

On the first day’s evening plenary session, news reports noted there was a small protest at the venue from an organization calling itself Chicago South Asians For Justice, during which three people were arrested. One of the signs carried by protesters read, “Stop Hindu Fascism,” The Quint reported.  Local police charged them with disorderly conduct and trespassing, releasing them later the same night, the news report said. One of the woman protesters told Press Trust of India, “About six of us were at the WHC today. We were there to protest the conference, the organiser, the speakers, and the attendees and their support for the current and historic violence that’s been propagated by the RSS and other similar organisations,”.

United States Congresswoman Tulsi Gabbard, in an email to the media said it was being wrongly reported that she was the honorary chairperson of the WHC 2018. “Rep. Tulsi Gabbard withdrew from her participation in that event over four months ago on April 26, 2018 when it became apparent that the event was going to be a partisan political event,” the email said, with the letter as an attachment.

Former Illinois gubernatorial candidate and alderman Ameya Pawar, in a Sept. 7, tweet, said, “I’m a proud Hindu and the first Indian American elected to Chicago City Council. I’m extremely disappointed and ashamed the world Hindu Congress would invite speakers and organizations that promote discrimination, Islamaphobia, and Hindu nationalism. This is not who we are.”

The Indo-American Democratic Organization of Chicagoland in a tweet said it, “strongly condemn(s) the violent actions against peaceful protesters” at the WHC, putting a statement on Facebook.