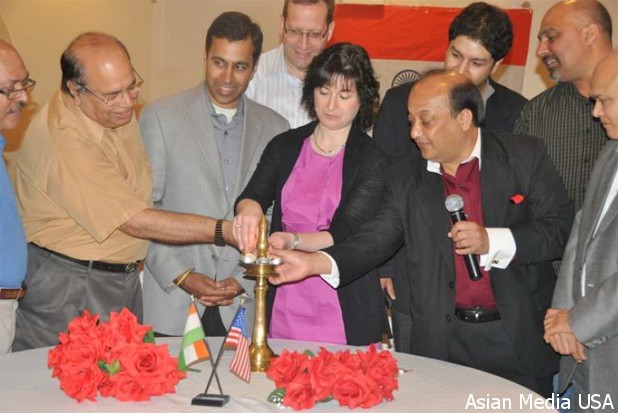 Chicago IL: Federation of Indian Associations [FIA] Chicago hosted a ceremonious ‘kick-off’ reception to set in motion a series of significant events centered on the celebrations of India Independence Day in Chicago on Sunday June 19, 2011 at the Punjabi Dhaba Banquet Hall in Chicago, Illinois.

Following the auspicious lighting, Iftekhar Shareef made an official declaration announcing that FIA will host a series of festivities in commemoration of India’s Independence with Grand India Parade as its crown-jewel event on August 20, 2011 on Devon & Western Ave. with series of other significant events including the Gala Banquet on August 19, 2011, Flag-Hoisting ceremony in downtown and possibly Taste of India Festival on Devon Ave.

Hon. Debra Silverstein, Alderwoman of the 50th ward thanked the leaders and trustees of FIA for inviting her to launch these series of events with the ceremonious touch and said she looks forward to participating in the parade. Hon. Debra Silverstein said she is extremely proud to represent a large constituency of Indian Americans in the 50th ward and looks forward to working very closely in addressing the issues of the ward.

In his remarks, Iftekhar Shareef said the lighting of the lamp signifies a good auspicious beginning to the celebratory events surrounding the India Independence. Five lamps that were lit bears significance to a hand with five-fingers each representing its own character and nuance of Indian landscape, but stressed that they symbolize unity in one spirit and accord.

Iftekhar Shareef castigated the efforts of two former FIA members who are falsely using FIA’s brand name with the sole purpose of creating divisions in the community. Shareef pointed out that this matter has been refereed to the office of the Attorney General of Illinois. Shareef stressed that FIA has strong credibility and great following in the community and no forces will be able to hijack FIA’s brand name.

Ranjit Ganguly, FIA co-founder praised the efforts of FIA in hosting Indian Independence that seeks to show the true inherent patriotic spirit of the Indian Americans.