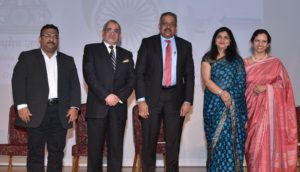 At the beginning, Consul General Ms. Neeta Bhushan welcomed the guests and highlighted the contribution of State Governments of India playing significant role in India’s economic diplomacy and external engagements.

While giving power point presentation on Madhya Pradesh Mr. Meena highlighted the geographical location and availability of variety of soils and 11 agro climatic conditions that support cultivation of wide range of crops in the State. It is the 5th among Indian States in rankings based on ease of doing business and reforms implementation according to a study by the World Bank and KPMG. The State has excellent infrastructure with 19 industrial development parks, 129 industrial areas, 6 food parks, 8 integrated development centers, 3 dry parks, 1 stone park, 1 IT park, 1 SEZ and an apparel park at Indore. Under the smart city program of GOI, 7 cities (Bhopal, Gwalior, Indore, Ujjain, Jabalpur, Sagar, Satna) are being developed as smart cities. 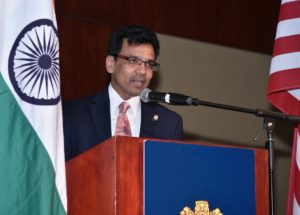 While presenting on the State of Andhra Pradesh, Mr. Meena highlighted that the states has a long coastline of 974km which provides numerous opportunities for the State to develop number of ports, marine products, and tourist destinations. Most of the coal-based power plants are located in the coastal regions due to their connectivity to the ports. The State has attracted FDI equity worth US$ 14.331 billion during 2000-2017. In order to fulfill the aim of Andhra Pradesh a most developed State by 2029 in the country, the Government of Andhra Pradesh has launched 7 Missions, 5 Campaigns and 5 Grids in the State.

While presenting on Punjab, Mr. Meena mentioned that approximately 82% of the State’s land is under cultivation making it the ‘Bread basket of India’ and led to first Green revolution in the country. It is the 3rd most attractive destination for new investments in India. The state of Punjab offers right mix for business with robust infrastructure, abundant skilled talent, competitive costs, well established eco-system, and attractive package of fiscal incentives making it a gateway to new avenues.

Mr. Raju Chinthala, Founder & President, Indiana India Business Council, presented the State of Telengana. In his presentation, Mr. Raju Chinthala mentioned that Telangana is the youngest State in the Union of India. The major industries include IT, Pharma& Biotech, Textile, Aviation, Food Processing , Automotive , Plastic & Chemicals. While highlighting advantage of Telagana, Mr. Chintala mentioned that the Pioneer State is natural gateway to both North and South India with 24,245 kms road length and 16 National Highways covering 2,593 Kms, excellent airport connecting international and domestic key cities and abundant natural resources and minerals. While highlighting the growth of the State, Mr. Chintala said that the State was ranked 1st in Ease of doing Business Reforms in 2015-16, the economic growth of the State has been increased from 6.43% to 9.24% since formation and the State achieved 1st Rank in India in cashless transactions. 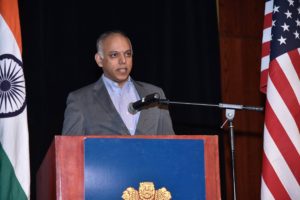 The Major State Government Initiatives include Mission Bhagiratha (Tap water to one crore homes), Mission Kakatiya (46,631 water bodies with storage capacity of 265 TMC over four years) and TelanganakuHaritha Haram (forest area to go up to 33% from current 23%).

Consul General Ms. Neeta Bhushan delivered the keynote address wherein she highlighted major aspects of Indian economy, key initiatives undertaken by the Government during the recent Budget 2018-19, new economic initiatives taken by the Government, developments in the field of Science & Technology and India-US relationship especially in the fields of trade, economy, defense, science & technology. During her address, Consul General said that in the last three years India has achieved a growth rate of around 7 percent and it is estimated that India will continue to grow at around 7.5%. India is a 2.5 trillion dollar economy now, which makes it the 7th largest economy in the world. She mentioned the special efforts made by Government to uplift farmers and under privileged sections of the society through schemes like Ujjwala and Saubhagya. Consul General also underlined Hon’ble Prime Minister’s message for maximum governance and minimum government that has led to improvement in India’s ranking by 42 places in the last three years in the World Bank’s “Ease of Doing Business” with breaking into top 100 for the first time. She restated that iconic policy initiative since GST, would ease the business and would attract investors & FDI. Talking on India-US relationship, Consul General mentioned that India and USA are natural allies. The total trade has been enhanced to 124 billion dollar in 2017. A recent survey done by CII reveals that 100 Indian companies have invested 17 billion dollars in the US creating over 113,000 jobs. In the Midwest Infosys and Wipro have set up bases in Indiana and are generating thousands of jobs for US citizens.. 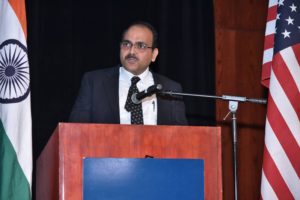 Mr. Bala Palamdai, President, TiE Midwest, spoke on business environment for Entrepreneurs in India. He mentioned that Government of India’s new economic initiatives and tax reforms have made a huge change and the process had become much simpler leading to more digitization and the economy had become more attractive for business and investments. Mr. Wilson A., Head International HR, L&T Technology Services Limited, highlighted on business evolution from HR perspective in US for Indian companies. He spoke on changing landscape of Indian workforce in US, employment creation, re-skilling & talent pool development and employer branding.

The event was attended by over 250 Entrepreneurs, Heads of Business organizations and Community leaders from Chicagoland and US-Midwest.