Chicago IL: When Chandrakant M. Modi was growing up in India, his father suggested a career in medicine because it would enable him to earn a decent living while also helping the needy. 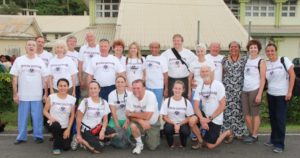 Despite his professional success, what has given him the greatest sense of fulfillment is that in the last 20 years Dr. Modi has helped people in distant lands. He has been on numerous missions with Flying Doctors of America, a division of Medical Mercy Missions, Inc.

Under the banner of Flying Doctors, volunteer medical professionals fly to remote villages in countries including Haiti, Madagascar, Amazon, Panama, Jordan and the borders between India and Tibet.

There is no cost to the patient for the expert medical attention these doctors offer, and for the physicians, the heartfelt appreciation of the patients is beyond material value.

“The trips to provide medical care have been very rewarding,” said Dr. Modi, now an energetic septuagenarian living in Skokie, Ill. “The people in underserved areas need care, and they appreciate our presence. Our missions bring hope and healing to the poorest of poor people.”

Gratitude can often be symbolized in a priceless token of appreciation. “I was deep in the Amazon Jungle Basin area on one occasion,” Dr Modi recalled.At the end of our stay the tribal chief came up to me, and gave me a comb he said he had made out of an animal’s bone.”

“I didn’t need it but it was given from the heart. I still have it, and consider it one of my most valuable possessions.” Flying Doctors is a Not For Profit Organization Founded by Mr. Allan Gathercoal DD, based at 212 W. Ironwood Drive, Coeur d’Alene, Idaho 83894. 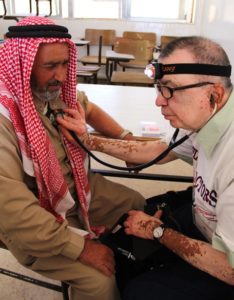 Flying Doctor organizes mercy missions about half-dozen times a year to remote areas where residents do not have regular access to medical care. The trips are designed to bring hope and healing to those with limited or no access to medical care” Doctors, nurses, dentists and on-ground support personnel pay their own fares. The medication they dispense is also purchased from private health-care companies based in US.

The sites they visit can be in a remote jungle in the Amazon basin off the cost of Ecuador, or in part of the world, like the war torn Syrian border mission near Jordan. The Doctor has volunteered in other 3rd world countries to include Madagascar, Mexico, Panama, Fiji and 3 different times in India. As per doctor Modi every mission has its unique challenges mainly due to terrain, remoteness and lack of accessibility of the area. In 2001 mission in Himalayan area of border between Tibet and India was in a far off tiny village, called Pso-Murari, situated at about 16,000 feet altitude, or just about 1000 feet below the first base camp of Mt. Everest. We were faced with thin air, cold temperatures, altitude sickness and overwhelming response for medical care. At the end of the mission we met with recently ‘re-incarnated highest ranking Buddhist Monk’, barely 8 yrs. old boy. At the conclusion of the meeting with his holiness, I asked him what he wants from America. He replied “Toy cars for me to play!”

Other unique mission was in 2011 in Haiti, soon following enormous destructive earthquake. Mission was hastily organized by Mr. Allan Garthaercoal, President/founder of Flying Doctors. One of the surviving church buildings was converted in to 40 beds makeshift acute care hospital located near the suburb of capital city, called Cabaret. Many survivors extracted from the rubble were initially treated on the field, and transferred to ‘Hospital’. Patients were cared for  on clinical judgment only, as routine facility like x-rays, lab, anesthesia, intravenous fluids, or operating room were all destroyed in earthquake. Our work was further complicated by lack of electricity, running water, painkiller, drugs, gas or supplemental oxygen. It was like practicing civil war era 19th century type medicine. Most of the patients had trauma related crush injury including fractures, deep wounds, amputation of limb etc. We worked round the clock with very little rest or sleep. Despite all the adversities, it was very gratifying unassuming experience that I will cherish forever, said Dr. Modi. 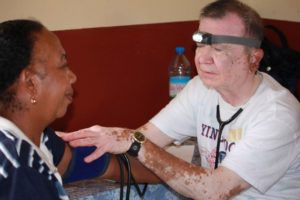 Future missions by Flying Doctors are planned to countries including Panama, Guyana, Peru, a women’s prison in Bolivia etc.

The missions often come with an element of risk and stress. “We were in Jordan, near the Syrian border, and many refugees needed medical care,” said the soft-spoken Dr. Modi. “The lines were long to see doctors, and there was a lot of stress because the refugees were frustrated and there were few facilities.”

In 2009 Dr Modi,   was recipient of President’s Circle Award given by Flying Doctors of America, in recognition of his contribution?

Now semi-retired Dr Modi intends to go on many more such trip, in part to fulfill his father’s dream for his son.

During a long career of ongoing learning, Dr. Modi had prepared himself for almost any problem. The possibility of danger to his life or limb has never deterred him.  “I am a Hindu by faith and believe in destiny.  When your time comes, it comes. I have never been fearful on these trips,” he said.

Doctor Modi is also avid traveler and has explored all seven continents including Antarctica and over 100 countries.