This concept was created and presented again this year by Sunil Shah, the founder President of the Federation of Indian Associations. 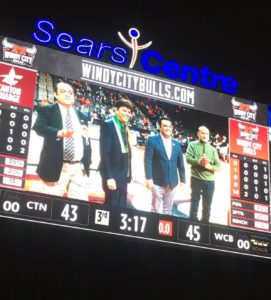 Indian Cultural dances were presented during the game by Junoon Dance Company and Kalashree Dance Academy by ToralChaudhari. There were about 35 dancers of different ages, who braved inclement weather to represent their dance schools.

Sahaj Shah a renowned DJ enthralled the crowds with a mix of Indian and Western music. Founder President Sunil Shah and Current President Neil Khot were honored and recognized on the center stage.

“This was a real honor for the Federation of Indian Associations,” Sunil Shah said.” Neil Khot current President praised the 35 odd dancers from different dance schools who came and represented and presented Indian Culture at the Basketball game.” The Executive Board of the Federation of Indian Associations was present in full force during the event.