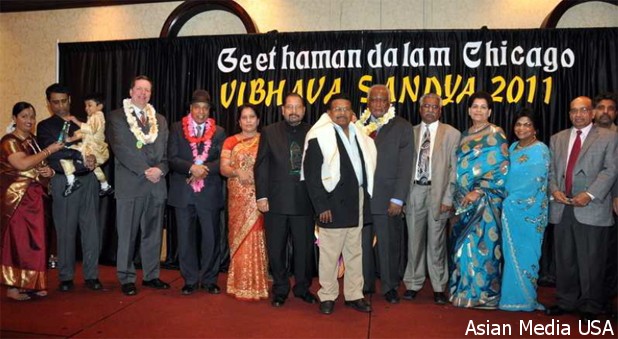 Geetha Mandalam Board of Director, Suresh Balachandran initiated the cultural programs for the evening after social hour, which commenced with an invocation prayer song by the children of Geetha Mandalam, Nandhini Nair, Ritika Nair, Arjun Nair, Sankar Nair, Nithya Nair, Srihari Nair and Sriram Nair. General Secretary, Sivan Mohamma, introduced the president Mr. Anil Pillai for his welcome address. In his welcome address Mr. Anil Pillai, spoke about organization’s future plan, he requested every one’s help and support to reach organization’s goal, and also he introduced board members and past presidents of the organization.

Key note speaker Mr. Sashidharan Nair in his key note address mentioned how one can serve the community and different method of motivating others to help needy people. Congressman Danny Davis, Secretary of State Jesse White, Alderman Joe Moore, and Trustee Pramod Shah spoke highly of the organization and expressed their happiness towards the organization during their facilitation speech.

After the award ceremony the next program was a group dance in typical Kerala tradition displaying God’s own country’s rich heritage in all its color and flavor by Geetha Mandalam Dance group led by Lakshmi Warrier. Dinner was served soon after the festivities which were cherished by one and all, who were in attendance. Variety entertainment programs started as soon as guests settled within their seat after dinner.

Renjith Nair, who was the emcee for the evening and who is also a mimicry artist, entertained the audience. Sivan Muhamma entertained the crowd with standup comedy. Santhosh and Santhi sang old Bollywood songs setting off nostalgia among the audience, and the curtain was drawn by 11pm after vote of thanks to all participants, media and sponsors by Board member, Satheesan Nair.

About Geetha Mandalam:
Geetha Mandalam is a non-profit Hindu religious organization, which was established in 1978. The members of the association meet regularly on the last Saturday of every month for group prayer, and discussion thereafter. The association celebrates Kerala’s grand traditions and festivals. ONAM and VISHU are commemorated every year on a grand scale. Besides, Ayyappa pooja is conducted every Friday, Saturday and Sunday of November, December and January of every year. Ramayana month is celebrated in all fervor by reading the entire Ramayana. Please visit website
www Geethamandalam.org for more information.