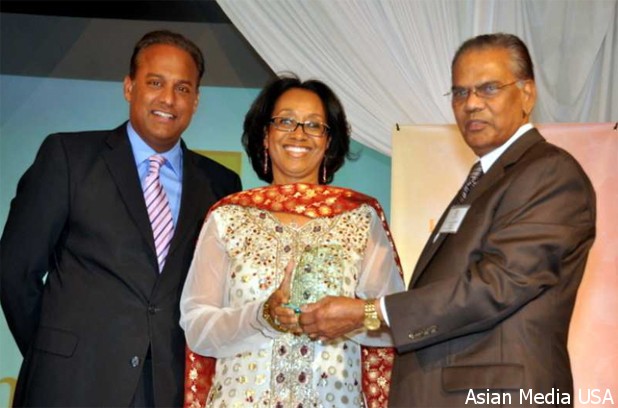 Chicago, IL: On Saturday, November 19, 2011, the Hamdard Center for Health and Human Services held its 19th Annual Gala at the Donald E. Stephens Rosemont Convention Center in Rosemont, IL. It was a celebration of 19 years at with special guest, Ravi Baichwal from ABC 7 News as the Master of Ceremony. Evening highlights included a high couture fashion show by Designer Studio, a live auction, and musical performance by Kavita Khrishna Murthy. 835 people from the South Asian and American Community attended the program.

The evening started with a warm welcome from Elissa Efroymson. This was followed by a cocktail hour in the lobby area, which was shared by over 18 exhibitors and vendors created a small Bazaar ambiance by displaying their beautiful products such as Indian Clothing, jewelry and paintings. Some of the participants were Sanyaz Photography, Makeup Iglam, I.Khanic, and Brown Hub and numerous others, who participated in making the Gala a successful event.

The admission fee for the event was $125.00 per person and $1,250 a table additional support came from the over 200 sponsors as well as over 15 ad sponsors and an auction which took place during the evening.

The Master of Ceremonies Ravi Baichwal from ABC News Channel delivered the opening speech. Ravi introduced the Chairman and Cofounder Dr. Mohammad Hamid who delivered his message that spoke about the hurdles and hardship the agency had encountered over the last year due to substantial reduction in funding, but also proudly announced the recent purchase of a six unit building as the new domestic violence shelter. Dr. Hamid said, “It is this increasing demand for our specialized services that directed our efforts to acquire a bigger and better shelter facility to accommodate growing number of DV victims. Tonight it gives me a great deal of pleasure to announce that after more than two years of hard work and help from our funders, we have finally purchased a 6-unit apartment building. This will be Hamdard’s new shelter facility and a befitting tribute to its founder, the late Dr. Farzana Hamid.”

The next highlights of the evening was a fashion show featured by Designer Studio who showcased the exquisite works of renowned South Asian fashion designers Deepak Perwani, Rizwan Beyg, Shameel and Sania Maskatiya. It was a perfect evening of amalgamation of classic and modern fashion fused with Bollywood, Latin and Hip Hop dance forms.

The audience was both riveted and mesmerized when Amina Spahic provided the client testimonial entitled “A Big Part Of My Life” spoke about moving with her family from Bosnia and becoming the first client enrolled in the youth Enrichment Program Amina received a thunderous ovation at the end of her speech.

The night ended with Live Entertainment by Kavita Krishna Murthy a very talented Bollywood sin ger who sang her bollywood hits “pyar hua chupke sey” and “dola re dola ” and many more. Kavita was accompanied by an orchestra conducted by Hitesh Master of Orchestra Saregama.

Illinois Auctioneer of the Year (2009) Vinnie Zaffarano then began the live auction which featured 5 exclusive packages consisting of airline tickets from Etihad and Lufthansa, New York Weekend Getaway, Ritz Carlton at the Caribbean and a Chicago weekend package.

About Hamdard: (Joining hand, Changing destiny)
Hamdard Center for Health and Human services is a not-for-profit health and social service agency whose mission is “to promote the physical and emotional health and psychological well-being of individuals and families by offering hope, help, and healing.” Hamdard was established by co-founders, the late Dr. Farzana Hamid and Dr. Mohammad Hamid, in 1992 as a proactive response to address the critical mental health needs of the South Asian and Middle Eastern communities. Hamdard’s philosophy is to meet the needs of the underserved through its new paradigm of care, which includes a comprehensive service model to provide culturallysensitive and linguistically-appropriate services to families. Hamdard serves minorities of different ethnicities and faiths. Most under served populations feel comfortable coming to Hamdard because the staff recognizes the importance of cultural sensitivity. Hamdard’s uniqueness is demonstrated through its programming of inlanguage services provided to the communities of the greater Chicago Metropolitan area. All of Hamdard’s programs and services are licensed and/or protocol-compliant. Hamdard staff can deliver in-language services in the following languages: Arabic, Bosnian, Gujarati, Hindi, Persian, Punjabi, Serbo-Croatian, Spanish, Telegu, and Urdu. Please visit www.hamdardcenter.org / Hotline: 1-866-305-3933